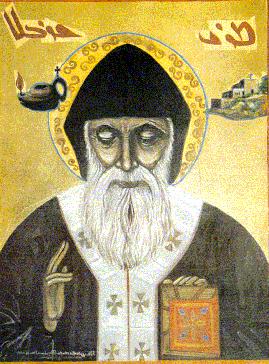 Lima is a long way away from Lebanon, yet there is a growing devotion tp St Charbel.  His photo (the one taken after his death) can be found in  a neighbouring parish and in our sacristy, and his statue is in a neighbouring shrine.   It is planned to begin a Mass in his honour this month and on the 22nd of every month.  Those with a special devotion, according to a custom in the Lebanon and in Peru for Peruvian shrines, wear a black "monastic" habit with a hood.  There will be big celebrations next July 24th on his feastday.  We are involved because we are the only monks around - the next best thing to a Maronite.   I used his photo for a post on the Maronite Church.   However, I shall give it to you again.  His body is incorrupt and lies in his monastery - (fr) David
Sharbel (Charbel), Hermit of Lebanon
Sharbel, or Charbel (1828-1898) was a Catholic Maronite monk and hermit of Lebanon. Little is known or recorded of his private life because he wrote nothing and no collections of sayings or equivalent have been written. His overwhelming fame in the 20th century and thereafter derives from the posthumous miracles attributed to him and to his intercession, culminating in his canonization as a saint by the Catholic Church in 1977. Technically, only two miracles, the minimum for sainthood, are accepted by the Church, although hundreds are attributed to Sharbel.
This article focuses on his life as a hermit.
Sharbel was born Youssef Antoun Makhlouf in the town of Bekaa-Kafra in the splendid northern region of Lebanon near the great cedar forests at 5,000 feet elevation. His father died when Youssef was three, and he was raised in part by an uncle, together with his mother, among four other siblings. His earliest days were marked by piety. At the age of 22, no longer a minor to obey his guardian, Youssef left his village abruptly to go to the monastery of Our Lady of Maifouk. The following year he was accepted by the monastery of St. Maron Annaya in the town of Ehmej. Youseff took the name of Sharbel, or Charbel, the name of a 2nd-century martyr of Antioch. The new name represented a pious monk's abandonment of the world.
A number of hagiographical but plausible stories of his relatives' opposition to his entering the monastery, of his mother's implorations and eventual reconciliation, are told by Sharbel's earliest American biographer, Joseph Eid. After acceptance by the monastery, Sharbel continued theological studies at the Monastery of St. Cyrprian (St Kobrianous) at Kfifan, where he learned Syriac and Arabic, and was ordained in 1859, returning to the Monastery of St. Maron. Here Sharbel remained for 16 years.
In the monastery, Sharbel would have divided his time between work in the fields and religious duties. He likely would have requested permission to live in greater solitude, and this permission would have been granted based upon his conduct of life. Because the Maronite order followed the Eastern practice of maintaining a skete or small hermitage of two hermits, Sharbel was able to enter the Hermitage of St. Peter and Paul, which was half a mile away on the grounds of the St. Maron Annaya monastery. He entered the hermitage in 1875, at the age of 47.
Eid describes the hermitage at the summit of Annaya, appearing "like a globe suspended in the sky, dominating the valleys and surrounding mountains." Dwelling at the hermitage at the time was Elisaus Hardini (Elisha Kassab El Hardini), who died in 1875. Sharbel shared the hermitage with Lebawos Hacklani (Libaos El Ramaty) and, after 1880, with Marsalis Mishmashani (Makarios Sawma El Mishmishani) as well. Additionally, there were attending brothers for each hermit.
Eid summarizes what can be observed about the preserved quarters in the hermitage:


Father Sharbel slept on a mattress of straw with a log for a pillow. He took one meal a day and never ate meat or delicacies. His nourishment consisted of vegetables and herbs or other simple dishes. Though the hermits tilled the fields and took care of the vineyards, they never tasted the fruits of their toil.


At the age of 70, Sharbel suffered a heart attack and died on Christmas Eve of 1898.

Such was the humble life of a monk and hermit, but in death this simplicity and quietude changed with the ascription of miracles and intercessions. As part of the process, Sharbel's body was interred and disinterred in 1899, 1927, and 1950. After 1950, with the increase of visitors to the monastery and hermitage, the hermitage itself was gradually converted into an international shrine. Writing in 1952, Eid even notes how Sharbel's favorite cedar tree outside the hermitage was picked clean of leaves and branches by relic-seekers, and the tree itself died.
¶

Books about Sharbel in English remain few, except devotaional books stressing miracles. The earliest and virtually the only biography is by Joseph Eid: The Hermit of Lebanon, Father Sharbel, printed by then nascent Paulist Press in New York. This work is the source of the three photographs above. Among the many web resources is the "official" website of the monastery of St. Maron at http://www.saintcharbel-annaya.com/