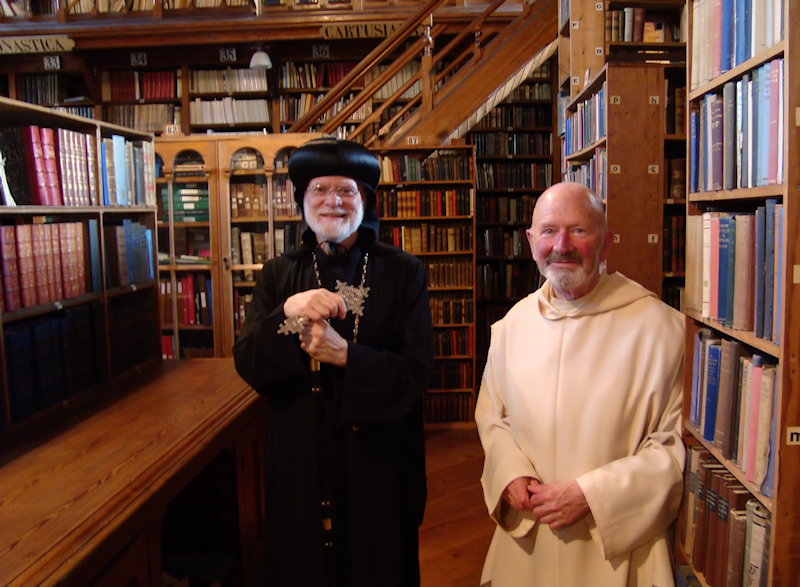 On 24 June 2010 Abba Seraphim, accompanied by Mr. John Wetherall and Mr. James Carr, visited St. Hugh’s Charterhouse at Parkminster, Sussex. Before the Reformation there were twelve houses of the Carthusian Order in England but they were all destroyed. The Parkminster house was founded in 1873 by monks from France and is the only Carthusian monastery now in Britain. It is constructed on a vast scale in the Carthusian tradition of individual eremetical houses around a great central cloister.
Upon arrival  Abba Seraphim and his companions were met by Dom Cyril Pierce, the Novice master (pictured above), and conducted on a tour of the monastery, including the impressive library. They concluded their visit by joining the thriving community for Vespers for the Nativity of St. John the Baptist, after which they were received by the Prior, Dom Jean Babeau. He and Abba Seraphim were able to discuss traditions and current trends common to Carthusuian and Coptic monasticism as both having the same spiritual fathers, St. Antony the first monk and St. Paul of Thebes, the first hermit.

I seldom leave comments on blog, but I have been to this post which was recommend by my friend, lots of valuable details, thanks again.