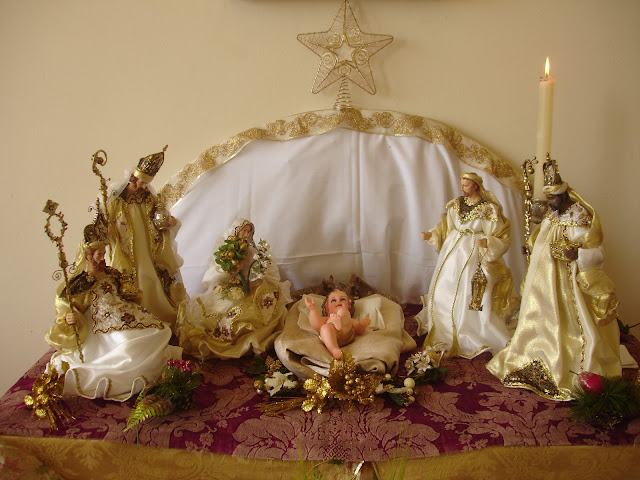 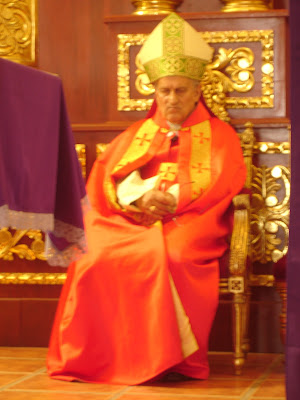 December 22nd   Celebration of Mass in honour of St Charbel by the Maronite Bishop Charbel Merhi who lives in Buenos Aires.   As you see, he celebrates in a cope rather than a chasuble, as is the custom among Oriental Orthodox and Catholics who celebrate according to the "semitic" rites.   The Maronite Church of the Lebanon boasts that it has always been in communion with Rome, and it has no Orthodox equivalent.   The text of the Maronite Liturgy is completely Oriental, but the Church itself is a blend of East and West.   Vestments tend to be Western in style rather  than Byzantine because they have always had more contact with th the Latin West.   They have "Mass facing the people", though I have heard there is a move among some to be more faithful to their roots.   The Mass was in Spanish, but the "words of consecration" were in Aramaic, the language of Our Lord and their classical liturgical language.   They are a monastic church which combines a monastic spirituality in the tradition of St Anthony of Egypt with devotion to the Blessed Sacrament..  Their spirituality, liturgy and style reflect their history.   For them, what they and the Orthodox believe about icons, they also believe about statues, as do the Peruvian peasants - points of contact with eternity.   They are rich in monastic saints, but they also have devotion to St John Vianney and St Therese of the Child Jesus.  Their own saint, the hermit St Charbel, is becoming popular outside Lebanon.  His tomb produces a kind of oil which is collected and used to anoint the sick, and there are many miracles attributed to its use. 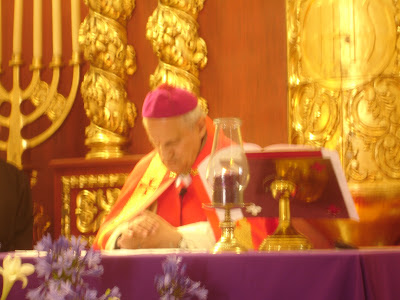 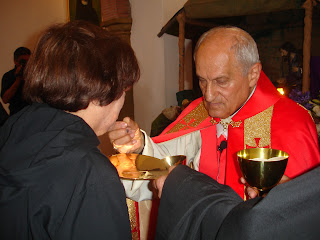 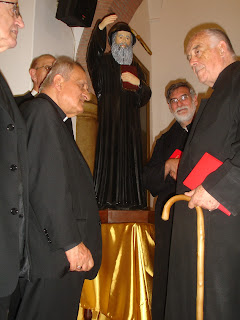 Bishop Charbel is on the left.   In the centre is a statue of St Charbel the hermit.   On the right are Father Luis, who is chaplain to the Confraternity of St Charbel, and myself with a stick.

Do I have any criticisms?   Only one where Maronites and Latins are in the same boat.   The bishop studied theology in the University of Salamanca.   The language and thought of Salamanca is very different from the language and thought of the Maronite Liturgy, even if both are expressions of the same faith.   I went to the University of Fribourg and studied St Thomas Aquinas with the Dominicans; and the language and thought of St Thomas and the concerns of those who follow him are very different from that of the Latin liturgy.   Somehow or other, dogmatic theology became separated from the liturgy in mediaeval universities.   St Thomas, in order to understand better the sacraments, abstracted them from the liturgy; and, in doing so, did a dis-service both to our understanding of the sacraments and to our understanding of the liturgy.   All was not lost because of his deep Catholic instinct, his excellent mind, and his profound holiness (and holiness is in accordance with liturgy by definition).   Nevertheless, the was an inbalance  in our understanding, and this becomes important in a time of liturgical reform.   We must allow the liturgy to speak to us if we wish to truly understand the sacraments.   Liturgy is Tradition, the product of the synergy of the Holy Spirit and the Church.   Dogmas are designed to protect our true belief which is the condition necessary for true worship, but they must inevitably lead us back to the liturgy which is the primary expression of Catholic belief..   In my post "The Meaning of Confirmation" I try to use the liturgy itself to explore the meaning of Confirmation; and I hope to do the same for all the sacraments.   A theology of the Eucharist based on the Maronite Liturgy would be a true contribution of the Maronite Church for the universal Church; but this won't happen while Maronites learn their theology in Salamanca.


December 24th and 25th:   The week leading up to Christmas will be remembered in our minds becaue, more than at any other time, we were broke.   The abbot had visited us and had given us money, but this was immediately used in paying debts.  We had no problem about the Christmas festivities because we had been showered with Christmas goodies, but we were completely without money.  There were two days without milk at breakfast and no way we could buy it.   Of course, we did not starve.   Some of the food we were given for Christmas was used on the week before; but that still left us with plenty for Christmas night.

As  superior of the monastery, I celebrated the Christmas Mass at 9.00 in the night of Christmas Eve.  There is no experience more wonderful than that.  We had finished all three nocturnes of Matins before the Mass.   Afterwards, according to Peruvian custom, we had our Christmas dinner.   Our postulant had been a chef before he joined, and he did us proud.   I have never eaten a more tender turkey!!   We took no photos at the Mass nor at the dinner; but there are some that were taken at the Mass at 10.00 on Christmas morning.   It was celebrated by Fr Luis who is chaplain of the Confraternity of St Charbel.   Both Masses were in Spanish but all the singing was in Gregorian Chant, directly from the Graduale. 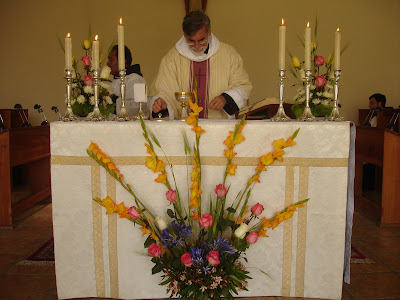 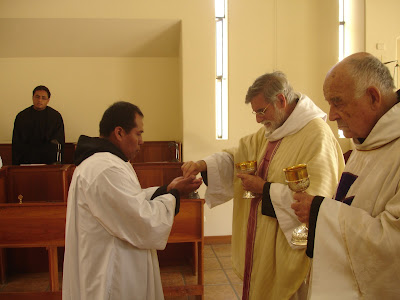 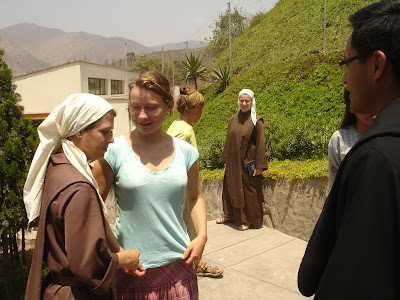 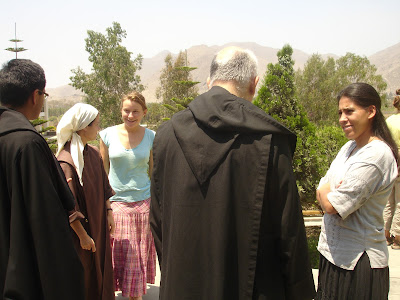 The sisters in brown are a new community, founded in France, called "Servants of God's Presence".   It is a community that has sprung out of a youth movement called "Point Coeur".   When they presented themselves to the founder of that movement, he arranged for them to do their noviciate in a Trappist convent.   Their "charisma" is "adoration and compassion".  They have  Divine Office (minus Matins), rosary in common,  lectio divina, and one hour a day of adoration before the Blessed Sacrament in a life dedicated to friendship with the poorest and most neglected.  They also take an active part in the youth movement in which boys and girls dedicate up to three years of their life between university and work to "adoration and compassion" among the poor of the world.   These sisters live only a short distance from us.