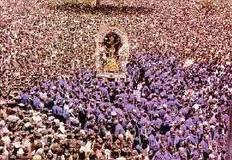 October is the "purple month" in Peru, the high point of the pilgrimage season, and of all the pilgrimages throughout Peru, the principal one, the best attended one, the one that elicits the deepest devotion, is the Lord of the Miracles in Lima.   It is a true icon in that it is not just a holy picture: it is a window into eternity, a means by which the "Lord of the Miracles" manifests his presence and through which he blesses the people and the city from harm, especially from earthquakes.  It was painted, not by a professional artist, but by a former slave who had been set free by his master because of the dedicated way he nursed the victims of yellow fever during an epidemic.   His name was Benito (Benedict)

He painted the picture of Christ on the cross on the interior wall of his house in 1650.  Later, people would talk of angel choirs being heard while he painted.   Having fulfilled his part in the story he died.   Then, on November 13th, 1655, there was an earthquake that destroyed a large part of Lima and Callao.   In Pachacamilla every adobe building was destroyed apart from the wall on which Christ was painted.   For fifteen whole years it remained,  open to the elements but unaffected by the weather. 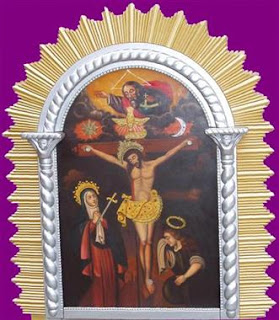 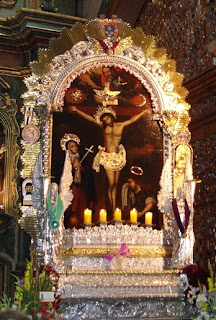 The story of ""El Senor de los Milagros" began when Andres de Leon saw the painting, the only thing that remained intact after the earthquake fifteen years before.   An energy seemed to come out of the painting, and Andres de Leon, who was suffering from a malignant brain tumour, was cured.   He told his friends.  The rumour spread; and devotion to the "Lord of the Miracles" began.

Pachacamilla was a poor area where native Peruvians had been moved from the sacred city of Pachacamac on the other side of Lima where there had been an ancient temple and oracle whose god had been invoked to save the population from eartquakes.   The people who came to worship at the wall of Benito's house were native Peruvians, slaves originally from Angola and ex-slaves as Benito had been.   Healings and other miracles were reported, and the crowds got bigger and bigger.   The authorities became alarmed at so many poor people and slaves meeting together so regularly and they decided to forbid the devotion.   They sent soldiers to disperse the crowd and to whitewash the wall; but one soldiers who climbed a ladder to erase the picture fell off and three others stepped forward to do the deed but something within them stopped them..    The crowd continued to grow.and the people became very vocal in their opposition to the order.   It was decided to make the whole thing official and, after having built a chapel to house the wall, a solemn Mass was sung there in the presence of the civil and ecclesiastical authorities.   After having won the day, the zeal of the people began to wain; and, perhaps, it would never have developed into what it has become if it had not been for the other earthquake.

On October 20th, 1685, at 4.45pm, there was a terrible eartquake which flattened most of Lima and Callao.  The chapel which the viceroy had built to house the picture collapsed, leaving the adobe wall still standing unsupported and frail.   It was decided that a copy of the fresco would be taken in procession every year to ask God to protect the city from earthquakes.   The Lord of the Miracles had taken over the function of the god Pachacamac.   In 1730, with the approbation of the King of Spain and the Pope, there was founded the Monastery of the Nazarenes, a convent of discalzed Carmelites where Benito's house had stood, the wall was included in the monastery church and the nuns were commissioned to look after the picture permanently.

The picture is of Christ crucified, but his resurrection is remembered in the title, "Senor de los Milagros".   God the Father and the Holy Spirit are represented at the top, while the Blessed Virgin with a sword in her heart and another figure that should be St John but many believe to be St Mary Magdalene.   The sun and the moon are on either side of the cross to remind us that the crucifixion of Christ is a cosmic event involving the whole of creation.

The procession of Senor de los Milagros in October is the largest Catholic procession and pilgrimage in the world.   Literally millions take part, and it happens twice, on October 18th and the 28th.  The Queen's coronation is not in the same class.   .   The people believe exactly the same about this picture as the Orthodox believe about their icons. On these days Christ is paying them a visit, using the picture to manifest his presence.   Women and children wear purple habits and men wear purple ties or arm bands, some throughout the whole month, and while they are wearing them this implies that they are abstaining from all kinds of things they do normally.   Senor de los Milagros, ten piedad!
Posted by Father David Bird O.S.B. at 20:12

maybe you have been running a blog quite some time?