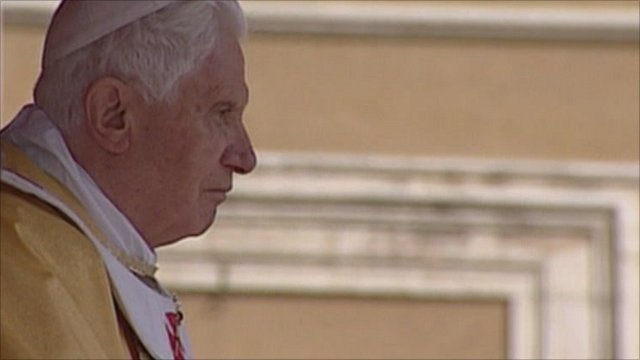 Pope Benedict XVI has officially recognised Australia's first saint, Mary MacKillop, a Melbourne-born nun who worked with needy children.
She was canonised with five others, including Brother Andre, a Canadian monk credited with miraculous healings.
MacKillop, who died in 1909, clashed with senior clergy and was briefly excommunicated, in part for exposing a sex-abusing priest.
Thousands of Australians are in Rome to witness the ceremony.
Pope Benedict XVI, canonised the six saints in St Peter's Square in front of some 50,000 people.
He declared that "throughout the Church they be honoured devoutly among all the saints".
Commitment Among those attending the Mass were hundreds of nuns from the order MacKillop helped found, the Sisters of St Joseph of the Sacred Heart.

"We've always believed that Mary was a saint," said 65-year-old Moya Campbell, a member of the order.
Father Thomas Casanova, a priest from New South Wales and a distant relative of MacKillop, said it was a momentous occasion.
"I've been looking forward to this since I was a child," he said.
Others wanted to recognise MacKillop's lifetime of commitment to poor people, including Australia's Aboriginal population.
"She supported Aboriginal people because she believed in supporting people who were disadvantaged," said pilgrim Melissa Brickell.
For anyone to become a saint, the Church has to recognise their intermediary role in two miracles. 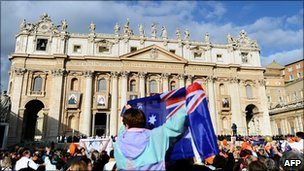 Australians were prominent at the Vatican ceremony
In MacKillop's case, both were in relation to people who were ruled to have been cured of cancer after praying for the nun's assistance.
Veronica Hopson was the first person MacKillop is said to have healed - she recovered from leukaemia in 1961.
On Sunday she told Australian TV: "I feel very fortunate that I was given the opportunity to live my life, have a family, have grandchildren, so that's a miracle."
Kathleen Evans, the second person MacKillop the nun is credited with healing, recovered from cancer in 1993. She attended the canonisation Mass and carried relics of St Mary to the altar.
"I think she would be delighted to see so many people looking at their own lives and considering how they can live better and care more," Ms Evans said in a statement.
Many Canadians were also in St Peter's Square to honour Brother Andre, who is thought to have healed thousands at his monastery in Montreal.
"He was wonderful. He healed many," Anna Diliddo, a teacher from Toronto, told AFP news agency.
Religious celebrity
Continue reading the main story

The process, which cannot begin until at least five years after the candidate's death, involves scrutinising evidence of their holiness, work and signs that people are drawn to prayer through their example:

Mary MacKillop was excommunicated in 1871, but the Church later exonerated her. She was eventually put on the road to sainthood by Pope John Paul II, who beatified her in 1995.
Australian Foreign Minister Kevin Rudd, who attended the Mass, has described MacKillop as "an extraordinary Australian woman".
Because of her role in exposing clerical abuse, some have called for MacKillop to made a patron saint of abused children.
In recent years, there has been a wave of cases around the world in which Church authorities failed to deal properly with priests accused of child abuse, sometimes just moving them to new parishes where more children were put at risk.
St MacKillop has become a kind of religious celebrity in Australia, where there is great anticipation about her canonisation, says the BBC's Duncan Kennedy in Rome.
She has been the subject of a musical, has stamps and pop songs in her honour and her image has been projected onto Sydney's Harbour Bridge.
Thousands of people attended a Mass in Melbourne's St Patrick's Cathedral to mark her passage to sainthood.
And all week, pilgrims have been converging on the chapel and museum at the site in North Sydney where she died.
Her mother Flora MacDonald was born in Fort William in the Scottish Highlands and later lived in Roy Bridge, while her father Alexander was born in Perthshire.
There is a shrine to the Blessed Mary MacKillop at St Margaret's Church in Roy Bridge. The nun visited the Lochaber village in the 1870s.
Posted by Father David Bird O.S.B. at 13:42