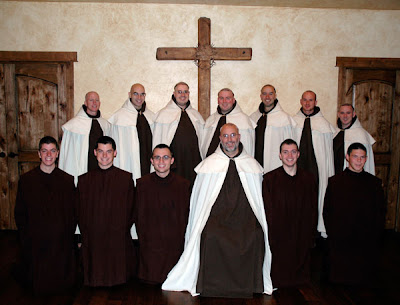 The monk becomes aware of his resurrection in the Risen Christ.
For many of our readers, the Monks of Mt Carmel are known for their absolutely wonderful "Mystic Monk Coffee", one of the ways they support their sacrificial life for the Lord. I encourage all of our readers to order it, drink it, and with every sip pray for these mighty men of God. However, there is so much more to their way of life. That is why this article is only a "teaser". I was so moved by the Monks of Mt. Carmel, I have more articles to come.The monastic life is one of the greatest treasures of our Church. There is some very good news! The monastic life is undergoing a great resurgence in our day.

The Monks of Mt. Carmel are a seed of the Springtime of the Catholic Church for the sake of the world.
Email

Print
FacebookDelicousMySpace
TwitterStumbleDigg
More Destinations
CODY, WY (Catholic Online) - As a budding theologian my favorite definition of a theologian was offered by a monk of the fourth century, Evagrius of Pontus. He wrote in his reflections entitled "Mirror for Monks": "The Knowledge of God is the breast of Christ and whoever rests on it will be a theologian". The Image evokes the beloved disciple John, the author of the fourth Gospel, depicted at the Institution of the Eucharist, the "Last Supper", with his head on the chest of Jesus the Christ. His Gospel narrative was the last to be written and is the most theologically reflective. Clearly, John was a theologian. He learned that theology in the school of prayer.
That has been proven by my own personal experience of monks. As a 'revert' to the Church, I had the privilege of spending 21 months in a monastery as a very young man. There, I began a lifelong journey of prayer. I also studied the early fathers of the Church. I was taught by a wonderful monk. He was the first of several monks who have graced my life with their gift of holy presence, making Christ so palpable by their interior life - one which overflows in a genuine transfigured humanity.
From my encounters with monks immersed in their unique and vital vocation, no matter how much formal theological study they have (and many are the greatest scholars the Church has produced), I have experienced that their depth of prayer makes them the best theologians. It is out of that storehouse of grace that they are able to help the faithful find the longing of every human heart, communion and intimacy with the God who has revealed Himself fully, in the words of Pope Benedict XVI, as the "human face of God" in Jesus Christ.
That is precisely how I experienced Fr. Daniel Mary of Jesus Crucified, the Prior of the burgeoning monastic community in Wyoming formally called "Carmel of the Immaculate Heart of Mary". I had an absolutely delightful conversation with him recently. I hope it is only the first of many. His love for the Lord and the Church was contagious.

This is clearly a monk who "rests his head on the breast of Christ." As a result, he is filled with the very life of God. It was the Apostle Peter who reminded us that we have been are "partakers of the Divine Nature".  (2 Peter 2:1)  In a very special way, Monks have always enfleshed the truth which that profound biblical passage opens up for those who walk through life with the eyes of faith.
The great lay theologian of the Orthodox Church, Olivier Clement once reflected on a letter of Anthony the Great, one of the most celebrated among the first monks of the unified Church of the First Millennium. He wrote " the monk becomes aware of his resurrection in the Risen Christ. The Spirit brings to birth in him the glorified body. 'The whole body is transformed and comes under the power of the Holy Spirit, and something I reckon is already granted to it of that spiritual body it will become at the resurrection of the righteous' (Anthony the Great, Letter I, 4) By transfiguration the monk becomes the priest of the world, and the world regains around him its original lucidity and meaning."
Too often, people mistakenly believe that the monk retreats from the world because of its "corruption". In fact, the monk retreats (in differing ways in accordance with their particular monastic response) precisely in order to transform the world by his prophetic witness and powerful prayer. The dedicated monk is an essential part of the Lord's plan for the Church. The Church is what the early Fathers called the "New World", being recreated in Christ. We who have been baptized never again leave the Church. We actually live in the Church and go into the world to bring all men and women home.
The monastic life is one of the greatest treasures of our Church. There is some very good news! The monastic life is undergoing a great resurgence in our day. This is a new missionary age. The Holy Spirit is at work! We need monks and mystics to help us in the task of setting the Church on fire once again with a love for the Risen Savior, so that she can win the world.