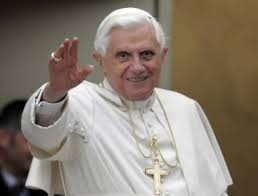 Student of the past, prophet of the future
By Father David Vincent Meconi, S.J
In his (now famed) Christmas Address to the Roman Curia (December 22, 2005) Pope Benedict contrasted the two ways of understanding the Second Vatican Council. While some have insisted on seeing the Council as a clear break from what went before, others maintain that although some aspects of the Church were given new expression, the essence of the faith and those truths upon which human salvation hinges did not change. Pope Benedict named the first position the “hermeneutic of discontinuity and rupture” and the second the “hermeneutic of reform.” Aware that the Church must continuously develop and reform, the Holy Father’s address makes it quite clear that such growth is always organic, an unfolding of the fundamental truths Christ first taught his Apostles.
Such an insight is surely rooted in Benedict’s own love of the Church and in his study and command of Catholic doctrine, but also, more particularly, in his love of the early Church Fathers. For what is of note in this Christmas Address is how the entire message is rooted in the thought of St. Augustine, the opening line of the address coming from one of the Bishop of Hippo’s own Christmas sermons “Expergiscere, homo: quia pro te Deus factus est homo—Wake up, O man! For your sake God became man” (Sermon 185). As a student, Joseph Ratzinger wrote one of his doctoral dissertations on St. Augustine’s ecclesiology; as Pope Benedict he included St. Augustine’s famed seashell on his papal coat of arms, thereby pointing the world to both the power of the sacraments as well as the inexhaustibility of Christian doctrine. (The story goes that one day Augustine took a break from writing his treatise on the Trinity and while strolling along the shore, came across a young boy using a seashell to displace the waters of the Mediterranean into a hole he had dug. Augustine naturally told the boy that this was an impossible task, to which the Christ-child responded: “And you will never penetrate the mysteries of God.”)

Immersed in the Church Fathers, Benedict realizes the organic structure of the Church: Christian truth is “from the beginning” and the Church’s role is to appropriate the mysteries of Christ’s life by humbly receiving what her founder reveals. Such transmission is never determined by what is novel or “relevant” but by the prayerful succession of the ancient “rule of faith,” that treasury of thought and of action given by Jesus to his people for all time. In an underappreciated section of Principles of Catholic Theology (1987), “Anthropological Foundations of the Concept of Tradition,” then-Cardinal Ratzinger relies on Irenaeus, Hippolytus, and St. Augustine again to argue that the human person is by nature a creature of tradition. That is, like the human person who is inescapably coming from somewhere and simultaneously tending to somewhere else, tradition too moves in both directions: it continuously recovers the truths expressed for yesterday while concurrently guiding the human person rightly into the future. In this way, writes Ratzinger, Christ’s Church is both the “ground control” and the “heavenly terminal”: both the measure of authentic growth as well as the goal toward which every holy person strives.
It is telling that whereas John Paul II dedicated a majority of his early Wednesday Addresses to (what has become known as) the theology of the body, Pope Benedict took the Christian people through the lives and the contributions of the Church Fathers. C.S. Lewis once wrote that we cannot late in the evening intelligently join a conversation that began midday. Benedict’s embrace of the early Church has rooted him firmly in this appreciation for continuity, proving that he is not only a student of the past but also a prophet for the future