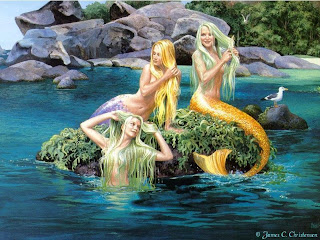 One sunny morning, I was crossing the town after Mass, when a small boy of about eight ran up and took my hand. “May I see the sirena please?” he asked. I searched in my vocabulary for the meaning of sirena and had a mental picture of Ulysses being lashed to the mast of his ship to stop him from following the enchanted sound of the sirens’ song which would lure him to his death. Something told me that, whatever the child wanted, it was not that. “No, I’m afraid I haven’t got a sirena,” I replied, thinking that, perhaps, it was a kind of sweet. Unlike the others who were to come, the boy believed me and ran off; and I immediately forgot his request. Little did I know that this was the beginning of a saga.

Two days later, there was a knock on my door, and a small group of secondary school kids were there wanting to see the sirena.

“I’m afraid I don’t have one,” I said, “but this is the second time I have been asked. What is a sirena?”

“Everybody says you have one,” they said accusingly. Then they explained that a sirena is a woman from the waist up but has the tail of a fish. It is the Spanish for mermaid – not a word I had ever had to use before. This was a very particular mermaid. She was ten years old, with fair, golden hair and blue eyes. According to the story which was widely believed, I had found her on the beach that was just outside my home; and she had a fish hook caught in her throat. I took her to the hospital next door and saved her life; and she gave me a scale of pure gold from her tail as a reward. I assured the boys that this tale was completely untrue, that I had never seen a mermaid in my life and don’t even believe that they exist. The boys went away sceptical and unsatisfied.

The number of people at the door who wanted to see the mermaid increased day by day; and, as the news spread, so did the area from which they came. It received a small paragraph in a newspaper and a radio station sent someone to check. Soon there was a crowd outside both my house and the hospital next door all day and every day. They came from far and near. I thought it was very funny and, apart from denying it when asked, I made no move to disillusion the crowd who would not take no for an answer anyway. On one occasion, however, when a group of schoolboys asked to see her, I said, “Yes.” They took a step back in fright because I hadn’t done this before.

“Do you want to see her or not? Now is your chance. You can go into all the rooms, and, if you see her, come and tell me, because I haven’t seen her myself yet.” They entered the house cautiously and began their search and then came out with sad faces, “There is no sirena,” one of them said as they went out with slumped shoulders, sad and defeated. But this did not stop the crowd from growing.

I was told that a Protestant pastor preached about it on Sunday. He said that this was another sign that the end of the world is coming – he was that kind of Protestant pastor – and he pointed out to his congregation, amidst the “alleluias” and “praise- the-Lords”, that they should note that this child of the devil is receiving hospitality from the Catholic priest, (“so we all know what side he is on!!”) A childless couple offered to adopt the mermaid, while other people scoured the beach for a sight of her parents “who must be looking for her anxiously.”

Many people asked themselves why I was lying, continuing to deny that I had a mermaid in my bedroom in a tank of sea water, when everybody knew that she was there. Obviously it was because I did not want the bishop to know, said some. Perhaps I had an unhealthy interest in her body, suggested others. No, said others, the reason is obvious. Everybody knows the mermaid has fair hair and blue eyes. Well, she is obviously not Peruvian. She is probably an English mermaid; and Fr David intends to smuggle her back to when he goes on holiday in two months time.

Then the television cameras came; and people from and later told me they had seen the interview. The journalist and I had a good laugh before the camera was ready; and my denial that any mermaid was lurking in my bedroom was believed when I said it in the interview because, as everybody knows, people never lie on television.

It was only very recently, many years later, that I learnt where the story of the mermaid came from. The parish house is at sea level and looks out onto the beach. There is also a row of buildings which are facing the beach on one side and the road on the other: one of these is a primary school. On a hot summer day during the morning break in 1996, the auxiliary in charge of discipline in the playground caught two little boys climbing over the wall that separates the school from the beach, and he took them to the headmistress. The boys protested that they were not trying to escape. Nothing was further from their minds than playing truant. They had only climbed the wall to look for the mermaid.

“What mermaid?” the headmistress asked excitedly, and the boys saw that she actually believed them. Well, as you know, nothing delights small boys more than taking their headmistress for a ride, especially when this involves escaping from a punishment that is due to them. They made up the rest of the story on the spur of the moment, and it spread like wildfire through the town, gathering credibility and details as it went. I would love to know who the children were.

That should be the end of the story, but true stories don’t always end where they should. About two weeks after I thought everything had blown over and the mermaid forgotten, a young man of about thirty came to the door, wearing a tin hat and the overalls of his firm. He asked me if it was true that a mermaid had been put up in the presbytery. He was interested because he had actually seen a mermaid about the time mine was in the news. He was working at the lighthouse, which happens to be on the most westerly point of South America, when the beam of what he called his “pirate light” lit up a rock in the sea. A mermaid was sitting on the rock combing her hair. He watched her for some time. I asked him if he had told people about it, and he replied that he had. I don’t know if he had been drinking; but that provides another source for the story, different from the one I heard from a teacher in the primary school. Perhaps his sighting, whatever it was, suggested to the boys the story they told. A fisherman from the fishing village told me that mermaids are seen from time to time on that rock; but it is advisable to ignore them because those who go out for a closer look never come back. So there is something in the Ulysses story after all.a_new_foundation.html