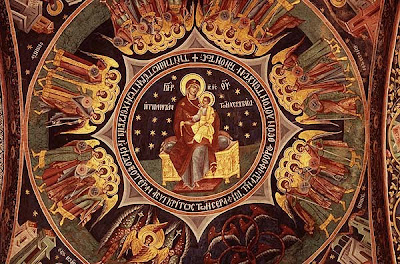 By Fr. Alexander Schmemann, The Services of Christmas

The Synaxis of the Most Holy Theotokos: On the second day of the feast, the Synaxis of the Most Holy Theotokos is celebrated. Combining the hymns of the Nativity with those celebrating the Mother of God, the Church points to Mary as the one through whom the Incarnation was made possible. His humanity - concretely and historically - is the humanity He received from Mary. His body is, first of all, her body. His life is her life. This feast, the assembly in honor of the Theotokos, is probably the most ancient feast of Mary in the Christian tradition, the very beginning of her veneration by the Church.

Six days of post-feast bring the Christmas season to a close on December 31. At the services of all these days, the Church repeats the hymns and songs glorifying Christ's Incarnation, reminding us that the source and foundation of our salvation is only to be found in the One who, as God before the ages, came into this world and for our sake was "born as a little Child." 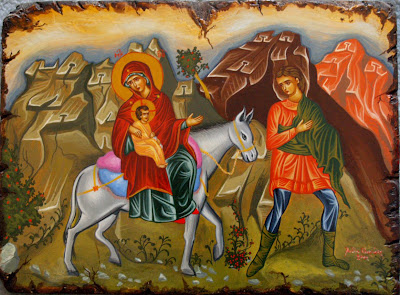 On the second day of the Nativity, the Christian Church gives glory and thanksgiving to the Most-holy Theotokos, who gave birth to our Lord, God and Savior Jesus Christ. This feast is called "the Synaxis'' because on this day all of the faithful gather to glorify her, the Most-holy Theotokos, and to solemnly and universally celebrate a feast in her honor. In Ochrid, it has been the tradition from ancient times that, on the eve of the second day of Nativity, Vespers has been celebrated only in the Church of the Most-holy Theotokos called the Chieftain [Èelnica]. All the clergy with the people gather together to glorify the Most-pure Mother of God.

HYMN OF PRAISE: The Synaxis of the Most-holy Theotokos

At the border between night and sunny day,
The dawn is rosy, pink and dewy.
The crimson dawn thou art, O Virgin given by God,
Precursor of the day, rosy and glorious.
Thou didst correct Eve and restore her to Paradise.
Do not withhold thy help from us sinners.
Israel crossed dry-shod over the Red Sea;
A cool spring flowed from the rock in the wilderness;
The bush burned but was not consumed-
As the dawn resembles the crimson eve,
So thou, O Virgin, dost resemble those foreshadowings.
O thou whom the Church calls the Mother of God,
Unknown to sin, not given to sin,
O Most-pure Mother of our Savior,
Because of thy purity thou wast chosen by God,
To bring down the Eternal Creator to earth.
That is why thou hast authority to pray for us,
And we have the joy of hymning and glorifying thee! 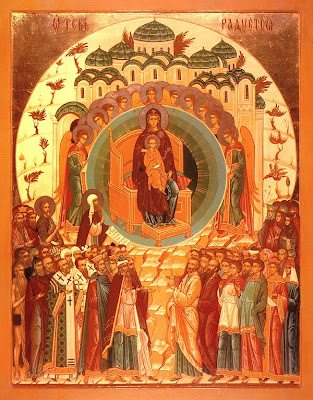 Apolytikion in the Fourth ToneThy Nativity, O Christ our God, hath shined the light of knowledge upon the world; for thereby they that worshipped the stars were instructed by a star to worship Thee, the Sun of Righteousness, and to know Thee, the Dayspring from on high. O Lord, glory be to Thee.

Kontakion in the Plagal of the Second Tone
He, who was begotten of the Father before the morning star, without a mother, becomes incarnate of you today, without a father. Wherefore, a star announces the good news to the Magi. Angels with shepherds praise your immaculate birth-giving, O Full of Grace.

Seasonal Kontakion in the Third Tone
Today, the Virgin bears Him who is transcendent, and the earth presents the cave to Him who is beyond reach. Angels, along with shepherds glorify Him. The Magi make their way to Him by a star. For a new child has been born for us, the God before all ages. 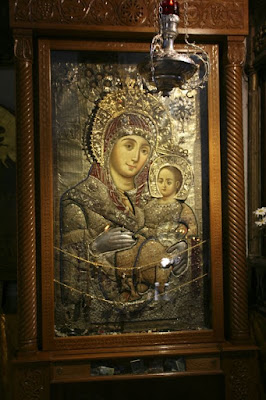 The miraculous icon of the Most Holy Virgin of Bethlehem (Παναγίας της Βηθλεεμίτισσας) is located in the Basilika of the Nativity of Christ in Bethlehem in a special place of veneration near the entrance to the Holy Cave in which Christ was born.

The icon is known for its sweet eyes and calm small which brings joy and sweetness to the hearts of the faithful. It is of unknown origin, though it is said it has its origins in Russia and was probably brought to Bethlehem by Tsarina Catherine the Great. The Holy Virgin had performed a miracle for Catherine, so Catherine donated her imperial jewelery to adorn the "Mistress of the World".

The holy icon of Panagia of Bethlehem celebrates on December 26, which is the feast of the Synaxis of the Theotokos. 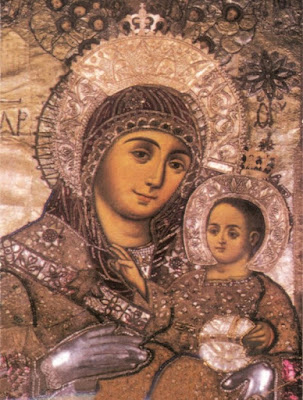 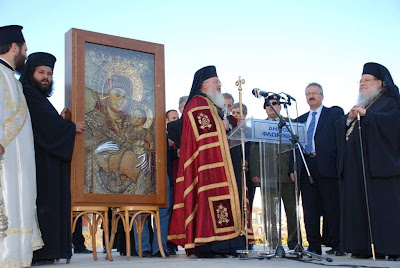