THE POPE WARNS THE CHURCH 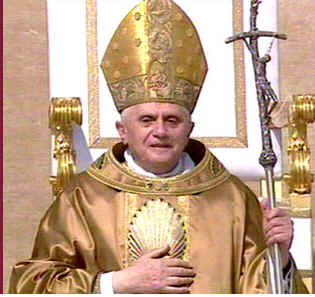 
The next video is about "THE CENACLE" founded by Mother Elvira. They are mostly ex-addicts who have sought and found re-birth through conversion to the life of prayer and penance advocated by Our Lady of Medjugorje. Some of their members have become religious sisters and priests, but most remain lay people, married and single. I celebrate Mass for them in Pachacamac once every two weeks, and they have desert days in our monastery. They have two homes for abandoned children here and there is a wonderful spirit and happiness. "By their fruits you shall know them."


The Pope Strikes Back


It is a nice question as to whether a true or a false accusation
provokes more outrage in the accused. So when, a few days before the
Pope’s late visit to this island, Cardinal Kasper said that arriving at
Heathrow was like arriving in a Third World country, he was much
excoriated by those who hate Cardinals as a matter of principle, and was
immediately accused of racism, the accusation against which no defence
is known.


Quite apart from the fact that the term Third World corresponds to
no racial category, the all too swift resort to the accusation always
puts me in mind of Lear’s remark in Act IV:


Why dost thou lash that whore?
Strip thine own back.
Thou hotly lusts to use her in that kind
For which thou whip’st her.


In other words, the accusation of racism is often but a smokescreen
for the accuser’s own doubts.


It is obvious to all who know Heathrow that the Cardinal’s remarks
about our largest airport could have been interpreted in another way
than racist: that its disorganisation, its atmosphere of always being on
the verge of chaos or collapse to be brought about by one more
passenger, its over-crowdedness, its sheer physical messiness, brings to
mind the urbanisation of the Third World. Has anyone ever heard of
people choosing to fly through Heathrow when an alternative presented
itself, just because they liked the experience of Terminal Three? The
very idea is absurd; the question answers itself; and while the tendency
or ability to muddle through might be an admirable one in some
circumstances, it certainly is not in the design of airports.


In other words, Cardinal Kasper’s terrible crime was to be right, to
draw attention to an unpleasant aspect of our reality from which we
would rather avert our attention because we cannot face the effort, and
no doubt the expense, that would be required to change it.


A great deal of the hostility to the Pope’s visit was likewise
caused by his having been right, at least in some things, such as the
insufficiency of consumerist materialism as a basis for a satisfactory
existence. There are few human types less attractive, surely, than
failed materialists, which is what the British, or at least so many of
them, now are. They consume without discrimination what they have not
earned: which is why many of them are so grotesquely fat as well as so
deeply indebted. Indeed, there is scarcely any kind of debt or deficit
to which we as a nation have not resorted in order to continue (at least
for a time) on our vulgar and degraded way. A nation that behaves thus
is quite without honour or self-respect, collective or individual. All
this Benedict XVI has seen with a perfectly clear eye; and if what
George Orwell once wrote, that we have now sunk to a depth at which the
restatement of the obvious is the first duty of intelligent men, we
might even call the Pope the George Orwell of our time.


Gratitude is seldom the reward of those who see an unwelcome truth
more clearly than others; quite the reverse. But Benedict’s ‘crime,’
apart from being German, goes much further than his failure (or worse
his refusal) to screen out the unpleasant consequences of consumerist
materialism from his vision, which it is the duty of all right-thinking
people. He lays down a ethical challenge to our utilitarian ways of
thinking; in other words, he is a heretic to be excommunicated from the
Church of Righteous Liberalism.


In pointing out some of the fallacies, oversimplifications, dangers
and empirically unfortunate results of contemporary rationalist
utopianism, the Pope is potentially provocative of the kind of spiritual
crisis that John Stuart Mill recounts in his Autobiography. When he was
twenty, Mill, who had hitherto been trained as a kind of calculating
machine for the felicific calculus, asked himself a question, with (for
him) devastating results:


Suppose that all your objects in life were realized; that all the
changes in institutions and opinions which you are looking forward to,
could be erected this very instant: would this be a great joy and
happiness to you?’ And an irrepressible self-consciousness answered
‘No!’At this my heart sank within me; the whole foundation on
which my life was constructed fell down. All my happiness was to have
been founded in the continued pursuit of this end. The end had ceased to
charm, and how could there ever again be any interest in the means? I
seemed to have nothing left to live for.


In other words, Benedict XVI presents not a challenge to this or
that piece of social policy, but to a whole Weltanschauung. And hell
hath no fury like a questionable Weltanschauung questioned.


Here it is necessary for me to declare an interest, or rather lack
of one. Just as one cannot write of the question of tobacco-control
without declaring that one owns no shares in a tobacco company, so I
must declare that I am not a Catholic, that I am not religious, that I
am not therefore an apologist for the curia or anyone else. I am, in
fact, not a systematic thinker at all, lacking the capacity or patience
for it. And I disagree with the Pope on many things, but I do not
therefore hate him.


The quite extravagant expressions of antagonism towards him — such,
for example, as that consideration be given to arresting him for crimes
against humanity — seem to me to bespeak a very odd, almost paranoid,
state of mind. And while I hesitate always to use Freudian concepts,
surely the idea of projection, the attribution to others of
discreditable inclinations, thoughts or behaviour that one has oneself
had or indulged in, is appropriate here.


As everyone knows, the Catholic Church has been embroiled in a
scandal about the sexual abuse of children by priests and the religious.
It is the Pope’s supposed complaisance towards and responsibility for
child abuse that has led people like Christopher Hitchens and Richard
Dawkins to call for his arrest for crimes against humanity, under the
doctrine of universal jurisdiction for such crimes. No one would say
that the church has acted always with appropriate expedition in dealing
with the problem.


But the problem is not only, or even mainly, that of the church,
quite the contrary. It is universally accepted that step-fathers, for
example, are many times more likely to commit both physical and sexual
abuse against children than biological fathers; and since
step-fatherhood has now become a very much more common relationship than
it once was, thanks to the social reforms of the last fifty years or so,
it is likely that the great majority of child abuse that occurs in this
country is committed by them. Moreover, it is a matter of common
knowledge that many mothers connive at such abuse because they wish to
retain the favours of the step-fathers.


It follows from this that, if the Pope should be arrested for crimes
against humanity, so should the following categories:


Feminists and all other proponents of lax marriage and easy divorce,
including journalists


All social workers and social security officials who have sought
advantages for or administered payments to non-widowed single parents
and no doubt many others.


I hope I need not say that I am not in favour of the arrest and
trial of perhaps forty per cent of the population between the ages of
twenty-five and sixty, or that I expect secular social ‘liberals’ either
to arrest themselves or each other, but that they should does seem to
follow from the argument of at least a few of their representatives.
Indeedhow, not very far beneath a veneer of libertarianism, lies an
authoritarianism that makes Benedict XVI look very liberal indeed. They
want arguments to be settled by arrest: in other words, who can arrest
whom, assuming that they will always be the ones to wield the handcuffs.


Given that so intelligent a man as Professor Dawkins, and others
like him, were so clearly illogical on the matter of the Pope’s visit,
are we not entitled to suspect a deep emotional confusion within them:
for example, one caused by a robust and unaccustomed challenge to a
brittle Weltanschauung?
__._,_.___
Posted by Father David Bird O.S.B. at 07:54