ICONS AND THE MYSTERY OF CHRIST

The Introduction to  Man, the Image of God: The Creation of Man as Good News| Christoph Cardinal Schonborn | Ignatius Insight

I start this meditation by looking at the feast of the Ascension. The angels say to those "men of Galilee" who cannot bring themselves to look away from the cloud that has hidden Jesus, carrying him away, "This Jesus, who was taken up from you into heaven, will come in the same way as you saw him go into heaven" (Acts 1:11).

More than thirty years ago, in the first edition of my book God's Human Face: The Christ Icon, I remarked concerning what the angels said,

The prediction that he would return "in the same way" as they had seen him ascend implies the task for the disciples left behind, really the Church, to keep alive the remembrance of his face.... The icon is an expression of his living remembrance: it commemorates not merely a man from the distant past, but him who as man was glorified through suffering and the Cross, who is alive now and "intercedes for us with the Father", and whose return to us has been promised. The icon is a connecting link between the Incarnation and the return, between the first and the last coming of the Lord. The icon not only perpetuates the memory of the Incarnation, it is also a constant reminder of the promised return of Christ. This is why the Eastern Church considers the icon of Christ an indispensable element of the profession of the Christian Faith. The Eastern Church sees the icon as a condensed version of the Creed. [1]

The icon of Christ: for many Christians, the Eastern tradition of icons, their painting and their spirituality, has become something like a rallying point, a place where all Christians can meet. Icons are present more or less everywhere in the Church, both Eastern and Western. Their language, their symbolism, and their influence seem truly to touch the hearts of many of our contemporaries. People have often wondered why, in our own day, the art of the icon has now come to be seen as a special way of expressing the Christian faith.

There may be a "fashionable" side to this (the accusation some of the Orthodox make against Western Christians, under the impression that their Eastern tradition is wrongly "used" by Westerners). I think there is something deeper here. Thesensus fidei recognizes in the Eastern tradition of icons a kind of "canonical" expression of our faith, an expression going beyond fashion and the cultural variations of Christian artistic language. Icons are not timeless; they do have stylistic variations, schools, "cultural colorations"á they are not static or immobile, the reproach often leveled against them. What is the secret of their attraction, then, the key to understanding their mystery? What is the reason for the great consistency in their expression?

I think that the ultimate reason for this is the Mystery of Christ himself: the Word Incarnate, God become man, who become "circumscribable", as the saints who defended images, Saint Theodore the Studite and Saint Nicephorus of Constantinople, love to say. Over and beyond all cultural influences, any links with pre-Christian iconographic traditions, and any artistic variations, there is a common basis, one single source for iconic art: that is the mystery of the Holy Face of Jesus Christ. There is this one single face, there is this Jesus whom the apostles knew, with whom they ate and drank, whom they saw transfigured and saw abused: radiant with glory on Mount Tabor and scourged and crowned with thorns. It is that one unique face, that of Jesus the son of Mary, the Son of God, which stuck in Peter's memory. It was the gaze of the One whom Peter had just denied and who was looking at him in a way that nothing on earth was able to erase from Peter's memory or remove from his heart. 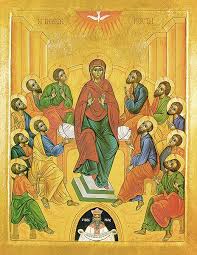 This Jesus is the basis of the icon, of its faithfulness (which some people describe—or more precisely, caricature—as an inability to change or develop), and of its unvarying attraction. It is because this is the icon of Christ that it attracts us. It is because we wish to see Christ that the icon speaks to us. It is because the faithful (and often even non-believers) can say, when they look at an icon of Christ, "That is Jesus!" that the icon speaks to them. It is not so much the artistic quality, although that is important and not to be neglected, since it is a true medium for the encounter with Christá thus it is not so much its status as a work of art that counts; rather: it is the strength of the presence of Christ himself that is important in the art of the icon.

I am not going to go into the discussion about the aesthetics of icons here, about the artistic aspect itself There are some competent studies about that. I want to draw your attention to a surprising fact that struck me when I was studying the literature of the iconoclast controversy in the eighth and ninth centuries, the great struggle for and against holy images in Christianity. In all that literature, I found no trace of any aesthetic debate. The question about the beauty of holy images plays practically no part here. At least, I found nothing about it. [2] How is that to be explained? I offered an initial explanation in God's Human Face: "Art as such was not a topic of discussion then. The interest focused on the limits of the use of art. The Byzantine iconoclasts tried to relegate art to the secular field." [3] The iconoclasts regarded art as permissible, as does Islam, but they thought it should be entirely restricted to the secular sphere. In a certain sense, iconoclasm represented a radical secularization of art, a desacralizing of artistic activity, which was reduced to what was purely decorative, to the ornamentation of secular life. Yet behind this rejection of any sacred character, there is more than a secularization of artistic activity. There is a certain concept of what is "Christian" and, thus, of what constitutes the Mystery of Christ. It is significant, in this respect, to note that the whole debate for justifying Christian art, the images of Christ and of his saints, turned around the Mystery of Christ.

In studying the controversy concerning images, I was struck by the clarity with which those who were defending images saw this debate, not as a question of aesthetics, but above all as a christological question. The Fathers of the Second Council of Nicaea (787) were much aware of this. For them, affirming the legitimacy of the icons of Christ was like setting the seal on the confession of his divinity (First Council of Nicaea) and his divine humanity (Chalcedon). The Orthodox Church celebrates the conclusive victory of those defending images in 843 as "the triumph of Orthodoxy", liturgically celebrated each year on the first Sunday in Lent.

The icon of Christ—a summary of the Christian faith! That may seem exaggerated. When we look more closely, it is by no means so. Allow me briefly to explain why, in two stages.

[A conference given at the Congress of Ecclesial Movements and New Communities, at Rocca di Pappa, June 24, 2006. Translated by Henry Taylor.]

Man, The Image of God: The Creation of Man as Good News

God created man in his own image, and the profound implications of this assertion are the subject of this book. Drawing on philosophy, theology, science, Scripture and art, Cardinal Schönborn reflects on man as the greatest of God's creatures and on the Christian understanding of his incomparable dignity that flows from this truth.

According to the Christian faith, all the works of God converge toward man, and find their goal in him. The world was made for man, and man was made for God. This "anthropocentrism" resounds like good news at a time when many find it hard to believe in God's special and personal providence for man. It is good news, indeed, that man has worth and his life has meaning because God bears an infinite love for him -- a love which is the very origin of creation and is the reason for the work of redemption.

Among the topics Cardinal Schonborn addresses are: Christ-the Loveliest of Men, The Exaltation of Man, The Basis of Man's Dignity, Faith in Art, God with a Human Face.

"Man is created by God and for God; he has an incomparable dignity because God, in creating him, has for him an infinite love, the very origin of creation and the reason for the work of redemption." -- Cardinal Christoph Schonborn