Just as Spanish Christians lighted candles on graves to show their disbelief in ghosts and their faith that Christ had turned dead Christians into saints, so an Orthodox saint in the same Spirit casts scorn on beliefs in vampires.  Again, this post we owe to Fr Ambrose Young, an American Orthodox priest.   Happy Halloween!!!

St. Nikodemos the Hagiorite On Vampirism 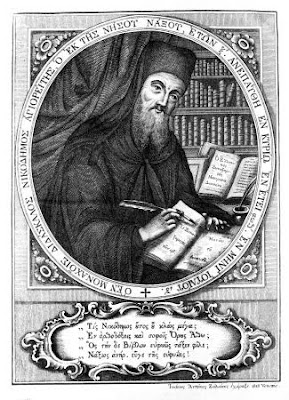 Canon 66 of St. Basil the Great

A grave-robber shall remain excluded from Communion for ten years.


Footnote By St. Nikodemos the Hagiorite

It is fitting that we add in the present footnote how great condemnation those priests or laymen deserve who open graves in order to find, as they say, the Vrykolakas*, as they call them, and put them to death.

Oh, to what a wretched condition and lack of knowledge present-day Christians have reached! Christian brethren, what delusions are those you have? What foolish and infantile imaginings are those in which you believe? What mockeries are those with which the demons separate you from an implicit belief in God, and make sport of you like silly children?

I tell you and I inform you with every assurance that Vrykolakas never occur, nor are there any in the world. Vrykolakas, as you call them, are nothing else than a false and childish prejudice born of your fear and unbelief; and they are a silly notion which fools you and tells you that the dead rise out of their tombs and come forth and trouble you. There are no Vrykolakas, because it is impossible for the Devil ever to raise a dead person and to make a corpse that has been dead a month or two have blood, or finger nails, or any bodily movement or motion, such as you imagine.

Vrykolakas are a silly notion, because, if one examines carefully those who claim to have seen Vrykolakas, he will find that after saying that someone else told them about it they finally come to believe that they themselves have seen them. That is my impression from having many times and in many places investigated the facts. Hence, my brethren, when you learn these, dismiss any such prejudice and imagination from your thought, and henceforth believe not that there are any such things as Vrykolakas in reality.

If, as a result of your paucity of belief in God the Devil ever obsesses you with any such imaginations, tell the priest to chant an Hagiasmo, or Sanctification Service, in that place, and through divine grace the activity of the demons will be terminated.

As for any persons that dare to open graves in order to strike or mangle a corpse, or to burn it, for the alleged purpose of putting to death with that blow or of burning the Vrykolakas, they ought to be canonized by the prelate not only as grave-robbers, but also as murderers. What am I saying? Why, such persons ought to be prohibited under severe penalties by the prelate from daring in the beginning even to open at all the graves of suspected dead persons.

See also divine Chrysostom (Homily 2 "On Lazarus and the Rich Man"), how he reproves those silly persons who believe that demons actually are in existence, which is the same as saying, the souls of those who have been murdered, or have been hanged, or have met a violent death. For he tells them that the souls of such persons do not become demons or Vrykolakas, but rather do those Christians who live in sins and who imitate the wickedness of the demons.

See also page 992 of the second volume of the Conciliar Records, where it is stated to have been a belief of the heresy of the Bogomils that demons inhabit bodies.

* Vrykolakas (Greek βρυκόλακας, pronounced /vriˈkolakas/), variant vorvolakas or vurdulakas, is a harmful undead creature in Greek folklore. It has similarities to many different legendary creatures, but is generally equated with the vampire of the folklore of the neighbouring Slavic countries. While the two are very similar, blood-drinking is only marginally associated with the vrykolakas. Read more here.