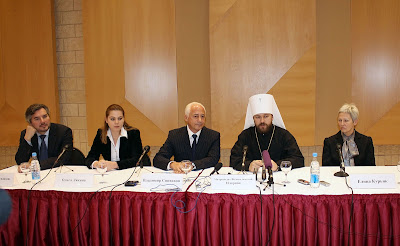 On December 9, 2010, a press conference on the Christmas Festival of Religious Music to be held with the blessing of His Holiness Patriarch Kirill of Moscow and All Russia on 9-23 January 2011 took place at the Moscow International Performance Arts Centre also known as the Moscow International House of Music. Its president Vladimir Spivakov and Metropolitan Hilarion of Volokolamsk, head of the Moscow Patriarchate’s Department for External Church Relations act as artistic directors of the Festival. Performing at the Festival will be the leading choirs from different countries of the world, including the Choir of Westminster Abbey (London, Great Britain), the St. Stephan of Decani Christ of the Cathedral of the Three Holy Hierarchs (Novi Sad, Serbia), the Cathedral Choir of Holy Etchmiadzin, the Moscow Synodal Choir, the Male Choir of the Moscow Sretensky Monastery, and the Choir of the Popov Academy of Choral Art.
The president of the Centre Vladimir Spivakov, the DECR chairman Metropolitan Hilarion, the Ambassador Extraordinary and Plenipotentiary of the Republic of Serbia to the Russian Federation Jelica Kurjak, deputy general director of the Centre O. Lyakina, and the Honoured Artist of Russia and precentor of the Synodal Choir Alexei Puzakov took part in press conference.
Metropolitan Hilarion told the press:
“The Department for External Church Relations sponsors the Festival on the part of the Church as foreign and non-Orthodox choirs will participate in this musical forum. We have decided to give a broad interpretation to the notion of “religious music.” Many people today perceive religious music as the one for liturgical services, composed by Bortnyansky, Kastalsky, and other professional church composers. Yet, if we consider this notion in a broader sense, it may include a great number of musical pieces for choir and for choir and orchestra composed on religious texts. This religious and musical treasure is inexhaustible, and even a hundred of such festivals will not be enough to present it to public. Performed at our Christmas Festival will be a well known and a less know music, as well as new pieces by our contemporaries who compose music on religious subjects being inspired by the Holy Scriptures.
“Our Festival scheduled for the days after Christmas is very important. On the one hand, the feast of the Nativity of Christ invites people to be religiously minded and helps them in that, while on the other hand there are not so many events in cultural and musical life due to the holiday season.
“Music is a special language in which people speak not only with one another, but also with God. It is not fortuitous that divine service in all major Christian confessions is accompanied by music. The Liturgy in the Orthodox Church is unthinkable without the singing of the choir; music is an integral part of our communion with God.
“People associate with one another with the help of music and can understand its language lacking any knowledge of foreign languages. One should open his heart to music to comprehend it.
“Besides, music is the language in which the Church speaks with the world.  Traditionally, church mission is perceived as performed by a preacher with the book of the Gospels or sermons in his hands, but the Church has spoken with the world over centuries through the works of art, icons, frescoes, church poetry and, certainly, music. It is not fortuitous that the Church, religion, and spirituality were practically banned at the Soviet time, religious music was also prohibited. People could hear “The All-Night Vigil” and “The Liturgy” by Sergei Rachmaninov only in one church in Moscow once a year.
“The Church today preaches the same eternal truths as it has been doing over centuries in the language of music. Music is a mighty missionary means of preaching and of moral education of people. Music cannot be spiritually neutral. There is music, which corrupts human soul, nurturing base instincts and vile passions, and there is music, which refines and spiritually uplifts people. I hope that people will hear that kind of music at our festival and every concert they attend will help their spiritual refinement and uplifting.”
Metropolitan Hilarion answered questions of the journalists. As to the significance of the first Christmas Festival, he noted that the Church lived not only within church walls and should use any opportunity to preach. “Religious music is a treasure that the Church has accumulated. It shares this treasure not only in churches, but at concerts as well. In this sense, Christmas Festival could be seen as an important missionary action. At the same time, the performance of choirs from other countries and other confessions will show that other Christian traditions have also accumulated spiritual treasure,” the DECR chairman said.
The National Philharmonic Orchestra conducted by Vladimir Spivakov will perform pieces from “Christmas Oratorio” and “The Song of Ascent” symphony by Metropolitan Hilarion, as well as “The Symphony of Psalms” by Igor Stravinsky and “The Chichester Psalms” by Leonard Bernstein.