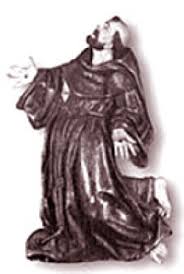 Lorenzo Scupoli was born in Apulia in 1530 and died in 1610.   In 1569, he  became a member of the Theatine congregation which was dedicated to the reform of the Church, especially the clergy, and to combat the Reformation of Martin Luther.   In 1577 he was ordained a priest; but in 1585 he was suspended a divinis after a false accusation and remained suspended till shortly before his death when he was completely cleared and his good name restored.   During the time of humiliation and frustration,  he accepted all that happened with humility, and offered his sufferings up to God.   If he were canonized he could be patron saint of suspended priests, because, for him, it was a way to sanctity.

In 1589, while suspended, he published "The Spiritual Combat" which went into sixty publications in twenty years and in several languages, noy only the usual ones, but also Greek, Armenian, Arabic and Japanese.

In Greece, it was translated by St Nicodemos of the Holy Mountain who was a mystic and spiritual father in his own right.   He is most famous for his compiling the Philocalia which is of immense spiritual importance in Orthodoxy and is one of the major causes of the revival of the Hesychast school of spirituality.   He also translated the Exercises of St Ignatius of Loyola, attributing them to a "wise man"..   He combined being profoundly loyal to his own Orthodox Tradition, while being completely open to ours, recognizing, in spite of the differences of emphasis, the common Tradition behind both.   Would that some abbots of the Holy Mountain were as open nowadays!!

In the 19th Century, "Spiritual Combat" was translated into Russian by St Theophan the Recluse (1815 - 1894) who also helped to translate the Philocalia into Russian.  His own spiritual emphasis was to aim at continuous prayer,not just praying frequently, but always.

I chose Lorenzo Scupoli as subject for this post because I heard him referred to in an Orthodox podcast as an Orthodox spiritual writer and decided to put the record straight; not snatching ownership for us papists but rejoicing in a common Tradition.  To read the Spiritual Combat yourself, please click on the title below.