I have been asked by many people about this stunning photo of Gothic windows that I use as the background for the title of my blog.   As you can see, they are windows in the Sainte Chapelle.   When I first saw them, my knees turned to water. It has been said that beauty is the imprint of the Holy Spirit on nature, and his Presence is almost visible in the Sainte Chapelle as in Handel's Messiah and jn the best classical music, as it is in a liturgy well celebrated.   Thus, I have no hesitation in presenting to you these videos and photos, hoping you will be all the better for having seen them. HISTORY
The Saint Chapelle rises above the rooflines of the royal palace. Miniature by the Limbourg brothers, ca 1400
The Sainte-Chapelle or 'Holy Chapel', in the courtyard of the royal palace on the Île de la Cité (now part of a later administrative complex known as La Conciergerie), was built to house Louis IX's collection of precious relics of Christ, which included the Crown of Thorns, the Image of Edessa and some thirty other items. Louis purchased his precious Passion relics from Baldwin II, the Latin emperor at Constantinople, for the exorbitant sum of 135,000 livres, though this money was actually paid to the Venetians, to whom the relics had been pawned. The relics arrived in Paris in August 1239, carried from Venice by two Dominican friars and for the final stage of their journey they were carried by the King himself, barefoot and dressed as a penitent (a scene depicted in the Relics of the Passion window on the south side of the chapel). The relics were stored in a large and elaborate silver chest, the Grand-Chasse, on which Louis spent a further 100,000 livres. The entire chapel, by contrast, cost 40,000 livres to build and glaze (until it was completed in 1248 the relics were housed at chapels at the Château de Vincennes and a specially built chapel at the Château de Saint-Germain-en-Laye). In 1246, fragments of the True Cross and the Holy Lance were added to Louis' collection, along with other relics. The chapel was consecrated on 26 April 1248 and Louis' relics were moved to their new home with great ceremony.

As well as serving as a place of worship, the Sainte-Chapelle played an important role in the political and cultural ambitions of King Louis and his successors.[2][3] With the imperial throne at Constantinople occupied by a mere Count of Flanders and with the Holy Roman Empire in uneasy disarray, Louis' artistic and architectural patronage helped to position him as the central monarch of western Christendom, the Sainte-Chapelle fitting in to a long tradition of prestigious palace chapels. Just as the Emperor could pass privately from his palace into the Hagia Sophia in Constantinople, so now Louis could pass directly from his palace into the Sainte-Chapelle. More importantly, the two-story palace chapel had obvious similarities to Charlemagne's palatine chapel at Aachen (built 792-805) - a parallel that Louis was keen to exploit in presenting himself as a worthy successor to the first Holy Roman Emperor.
source: from Wikipedia 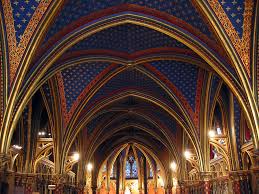 THE VIDEO BELOW IS NOT THE SAINTE CHAPELLE, BUT IT FITS THE MOOD
Posted by Father David Bird O.S.B. at 12:45