Special Christmas Greetings to Fr Dyfrig, to the parish priest and deacon, and to our friends in the Ukrainian Greek Catholic Parish in Gloucester, England.  Greetings also to Orthodox Members of Irenikon, to followers and readers of this blog.  I wish I could say something in staro-slav or Greek, but I can,t; therefore, in English, A HAPPY CHRISTMAS!!   Say a prayer for the Christians in Iraq and throughout the Middle East who are suffering persecution from Moslem radicals.
Christmas Resource Page
Posted: 24 Dec 2010 08:25 AM PST 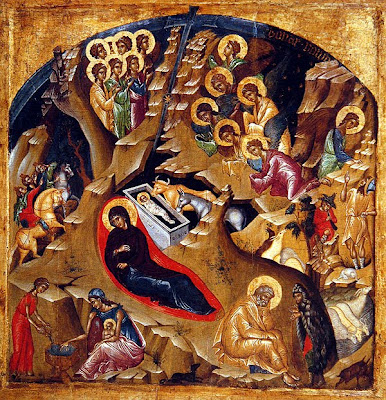 Christmas - the Capital of Feasts

Why Did God Become Man? The Answer of St. Athanasios

On the Incarnation of the Son of God

The Patristic Understanding of the Virgin Birth of Christ

Why Jesus Had To Be Virgin Born: St. Maximus the Confessor Explains

The 70 Weeks Prophecy of Daniel According to St. Jerome

The Magi and the Star: An Orthodox Understanding

St John of Kronstadt on the Nativity of Christ

Christmas 2008 With Elder Joseph of Vatopaidi

Patriarch Pavle on the Holy Nativity of Christ

Christmas Date Does NOT Have Pagan Origins

Dec. 20 - The Forefeast of the Nativity of the Lord

Christmas in Bethlehem: The Cross Banished From Souvenirs

Christmas Carols Sung At the Archdiocese of Athens

A 17th Century Version of "Christ Is Born"

Irmos - "A Star Has Dawned From the Tribe of Judah..."

The Christmas Kontakia of St. Romanos

What Shall We Offer Thee, O Lord

The Legend Of '12 Days of Christmas'

Does Christmas Have Anything To Do With Jesus?

The Christmas Tree and Orthodox Tradition

In Defense of the Christmas Tree

"The Gleaner: A Christmas Story" by A. Papadiamantis

The Twelve Days of Christmas in the Orthodox Church
Christmas Carols Sung At the Archdiocese of Athens (please click)
Posted: 24 Dec 2010 08:15 AM PST 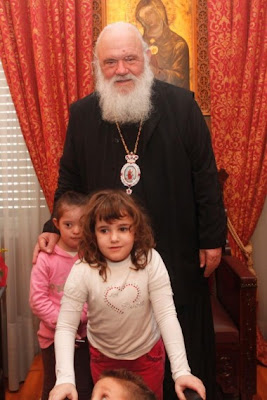 Christmas Carols were sung this morning, Friday 24 December 2010, to Archbishop Ieronymos of Athens and All Greece at the Archdiocese in Athens by children from various organizations. Traditional Cretan dances also took place.

The Archbishop heartily thanked everyone and wished them all a Merry Christmas and a Blessed New Year. 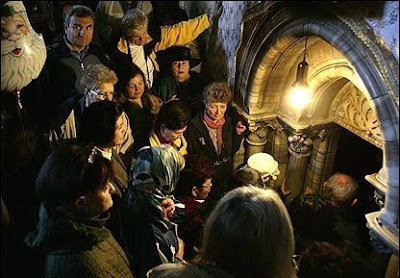 For fear of Islamic fundamentalism, textile workshops in Hebron and Jerusalem, produce and sell T-shirts and other items depicting the Church of the Nativity without the cross. Discrimination and economic crisis are forcing Christians to flee from the Palestinian territories and Israel. The risk is to see a future without Christians in the Holy Land. Interview with Samir Qumsieh, director of the Catholic television station Al-Mahed Nativity TV in Bethlehem.

This Christmas in Bethlehem, the cross has been banned from souvenirs for tourists and pilgrims in the Holy Land. Some textile workshops in Jerusalem and Hebron have begun to print and sell T-shirts depicting the Church of the Nativity in Bethlehem without the cross. Because of the growth of Islamic fundamentalism in the Palestinian territories, the cross was also removed from t-shirts of football teams. Interviewed by AsiaNews, Samir Qumsieh, journalist and director of the Catholic television station Al-Mahed Nativity TV in Bethlehem, said: "I want to launch a campaign to urge people not to buy these products - he says - because the removal of the cross is an intimidation against Christians, it is like saying that Jesus was never crucified. "

Like every year, thousands including authorities, faithful and tourists from all over the world crowd, the Church of the Nativity in Bethlehem for midnight mass on the night of 24 December. It will be celebrated by the Latin Patriarch of Jerusalem and will be attended by the highest offices of the Palestinian Authority.

Qumsieh says that the population is living these days with joy, but the situation for Christians is still dramatic. According to the journalist, the dialogue of recent years between Muslims, Christians and Jews has not changed the situation.

"In the Holy Land - said Qumsieh - the emigration of Christians is growing, even if the authorities refuse to give precise numbers. Every day there are people who flee to other countries. As Christians, we live in a constant feeling of fear and uncertainty, and if you live in constant tension and pessimism you can not plan anything.

According to the journalist, "people leave because there is no work and movement is restricted under Israeli control." Other factors are the internal problems of Palestine, such as the clash between Hamas and Fatah, which has repercussions on the economic situation. Qumsieh points out that from 2002 to 2010 the Christian population of Bethlehem has dropped from over 18 thousand to 11 thousand people. In Gaza, after Hamas came to power in 2006, Christians have fallen by about 3,200 units, from 5 thousand to less than 1800 in 2010. Only 15,400 Christians (2% of the population) live in Jerusalem, as reported in a study by the Jerusalem Institute for Israel Studies. They are 50% less than the 31 thousand registered residents in 1948, when Christians accounted for 20% of the population of the city.

Meanwhile, on the occasion of the celebrations for Christmas, the Israeli military has ordered troops deployed in the occupied Palestinian territories to facilitate the passage of Christian pilgrims at checkpoints. The military has also distributed a brochure explaining the importance of Christmas for Christians and is urging soldiers to avoid unnecessary discussions and obstacles at the borders with the West Bank. 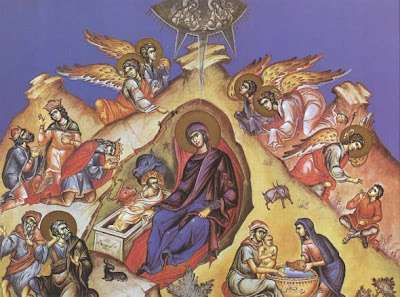 I behold a new and wondrous mystery! My ears resound to the Shepherd's song, piping no soft melody, but chanting full forth a heavenly hymn.

The Archangels blend their voices in harmony!

The Cherubim hymn their joyful praise!

The Seraphim exalt His glory!

All join to praise this holy feast, beholding the Godhead here on earth, and man in heaven. He Who is above, now for our redemption dwells here below; and he that was lowly is by divine mercy raised.

Bethlehem this day resembles heaven; hearing from the stars the singing of angelic voices; and in place of the sun, enfolds within itself on every side, the Sun of Justice. And ask not how: for where God wills, the order of nature yields. For He willed, He had the power, He descended, He redeemed; all things move in obedience to God. This day He Who is, is Born; and He Who is, becomes what He was not. For when He was God, He became man; yet not departing from the Godhead that is His. Nor yet by any loss of divinity became He man, nor through increase became He God from man; but being the Word He became flesh, His nature, because of impassibility, remaining unchanged…

And so the kings have come, and they have seen the heavenly King that has come upon the earth, not bringing with Him Angels, nor Archangels, nor Thrones, nor Dominations, nor Powers, nor Principalities, but, treading a new and solitary path, He has come forth from a spotless womb.

Yet He has not forsaken His angels, nor left them deprived of His care, nor because of His Incarnation has he departed from the Godhead.

And behold kings have come, that they might adore the heavenly King of glory;

soldiers, that they might serve the Leader of the Hosts of Heaven;

women, that they might adore Him Who was born of a woman so that He might change the pains of child-birth into joy;

virgins, to the Son of the Virgin, beholding with joy, that He Who is the Giver of milk, Who has decreed that the fountains of the breast pour forth in ready streams, receives from a Virgin Mother the food of infancy;

infants, that they may adore Him Who became a little child, so that out of the mouth of infants and of sucklings, He might perfect praise;

children, to the Child Who raised up martyrs through the rage of Herod;

men, to Him Who became man, that He might heal the miseries of His servants;

shepherds, to the Good Shepherd Who has laid down His life for His sheep;

priests, to Him Who has become a High Priest according to the order of Melchisedech;

servants, to Him Who took upon Himself the form of a servant that He might bless our servitude with the reward of freedom;

fisherman, to Him Who from amongst fishermen chose catchers of men;

publicans, to Him Who from amongst them named a chosen Evangelist;

sinful women, to Him Who exposed His feet to the tears of the repentant; and that I may embrace them all together, all sinners have come, that they may look upon the Lamb of God who taketh away the sins of the world.

Since therefore all rejoice, I too desire to rejoice. I too wish to share the choral dance, to celebrate the festival. But I take my part, not plucking the harp, not shaking the Thyrsian staff, not with the music of the pipes, nor holding a torch, but holding in my arms the cradle of Christ. For this is all my hope, this my life, this my salvation, this my pipe, my harp. And bearing it I come, and having from its power received the gift of speech, I too, with the angels, sing: Glory to God in the Highest; and with the shepherds, and on earth peace to men of good will.