FISSURES IN TIME: A PERSONAL REFLECTION ON THE NEWTOWN KILLINGS

The attached reflection, triggered by the recent killings at Townsend, comes from my friend Bonnie Thurston, a noted biblical scholar. Her forthcoming book, from Liturgical Press, is "Maverick Mark: The Untamed First Gospel." Bonnie is also deeply engaged in the International Thomas Merton Society."

Jim
(Thankyou, Jim: An excellent post; and, thankyou, Bonnie Thurston, for writing it.) 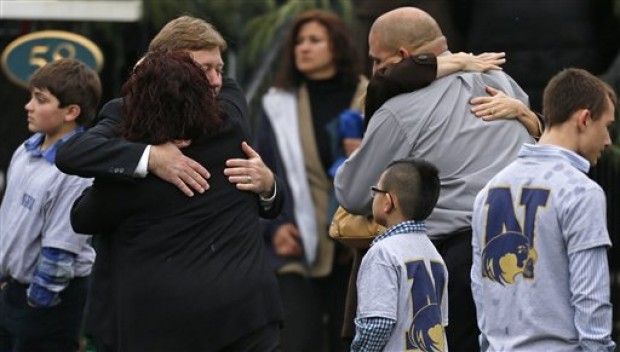 In the dark hours of the morning of December 14, 2012 I awoke from one of the worst nightmares I have had in years. It was the sort of nightmare from which one awakens sobbing and which makes one afraid to go back to sleep. As has become customary for me in Advent, I was resident in a Trappistine monastery, so did not know until the following day that on Friday the 14th someone went berserk, entered a grammar school for children 5 to 10 years old in Connecticut and killed 27 children and teachers. Full stop.

.
The birth of Jesus was followed by the slaughter of innocents. (Matt 2:16-18) This year it was also preceded in this way. “Rachel weeping for her children,” inconsolable. (Matt 2:18, quoting Jer. 31:15) We turn to our Lady knowing that she understands the grief of a mother whose child was murdered. That sword pierced her heart.

Still, one goes numb at such an atrocity, can hardly take it in. The monastery did what it could and should do, called a Day of Recollection, put Christ’s Presence among us, flanked by light, reminder that “The light shines in the darkness, and the darkness did not overcome it,” (John 1:5) wordlessly asked us to hold it all before the Light. Still, darkness can be very dark. With others, I knelt before the Blessed Sacrament and wanted to ask to carry some of the pain and anguish of the event, take it to myself from parents and loved ones and from God’s own broken heart. But I was afraid to ask fully and deeply, felt too fragile, and at the same time knew in some mysterious way I was already doing so.

People in the U.S.A. will, I hope, as our President hinted, call for much stricter gun control. But that will be a band-aid on the corporate jugular. So long as we are a violent people who promote a culture of violence and death, these outbreaks of Evil will occur. I could hear the demons chittering and dancing and wondered if those terrible dreams in the wee hours of the morning were connected in some way to what that poor boy in Connecticut was obviously at the time planning to do. Once Evil of that magnitude is set in motion, its ripples are devilishly widespread and unpredictable.
The locus of the problem is not elsewhere. I have no right to point fingers or assign blame. It is within me. Murder begins with my own violent impulses, my own darkness, my own woundedness against which I strike out. (Matthew 5:21-22) Ecce homo! I am the killer. Lord, have mercy!
The horror of such experiences, that reach even the very calloused heart, make it clearer than ever why people like hermits and solitaries, places like monasteries and contemplative communities, in short those choosing to be “outside the camp,” must exist. Every time there is a soul willing to open to and submit totally to God through the cross of Jesus Christ, a fissure, an “opening” is created in historical time for God to become operative in the world. But God is, in a sense, powerless and must wait for human volition to choose. God takes human free will absolutely seriously and in the Incarnation accepted flesh and its limitations. God invites, but does not use force.
The Evil One and his minions are not so respectful of the human person. They can ravish the soul or insinuate themselves into the soul in all sorts of nefarious ways, through addictions, what appear to be idle curiosity, the subtle negative influences by which most people are constantly bombarded. I am told even children are allowed to “play” video games the point of which is to kill. And we wonder why children commit carnage? We increasingly see acts of barbarity because our culture generally, and its “entertainment” in particular, slowly but surely callous the heart and lead persons to accept violence and perversion as normal. Evil has many entrées into human history, exerts pressure on souls in ways the love of God would never force them.
Monasteries and religious communities can be places where individuals who have “chosen for God” come together to facilitate each other’s continuing choice for and deepening in God. (Unfortunately, parishes are often too embroiled in and identified with the social and cultural “givens” to do so, although individuals in parishes, and often most surprising ones, can and do so choose.) So there is the “fissure,” the opening for God into time that is each soul’s and the opening that the community creates corporately. One imagines the corporate opening to be larger than an individual’s might be, but perhaps not, as God’s ways are not ours.
The balance between God and Evil in the temporal realm has always been terrifyingly fragile as, indeed, I have observed it to be in the spiritual realm. I believe that, somehow, in ways we may not be able to explain or “see,” each soul who abandons its ego striving at the foot of the cross, who surrenders itself to God and God’s purposes helps to right this precarious balance.
In the persons of Jesus, St. Paul and St. John, the New Testament indicates that eventually God will intervene and beat Evil at its own game. (See, for example, Mark 13, Matthew 24-25 and the Revelation to John.) This gives me hope. But in the interim, God depends upon us as individuals to be “fissures in time,” points at which divine love, mercy, forgiveness, gentleness and peace can flood into human time and history. I say with the Centurion, “Lord, I am not worthy.” (Luke 7:6) And the Lord replies, “I do not ask you to be worthy, only willing.”