Hildegard of Bingen: Voice of the Living Light
Mysterious, talented, colorful, and enigmatic woman, saint, and mystic. And Doctor?
By Sandra Miesel

Next October, Hildegard of Bingen (1098-1179) will join a most select company of saints if she is proclaimed a Doctor of the Church, as  reports indicate. To date, there are only 33 of these saints, whose exceptional holiness and wisdom have made significant contributions to our Faith. Hildegard would be only the fourth woman so honored, joining Teresa of Avila, Catherine of Siena, and Therese of Lisieux.
Among those luminaries, Hildegard blazes in colors all her own. Medievalist Peter Dronke describes her as “an overpowering, electrifying presence—and in many ways an enigmatic one.” The breadth and variety of Hildegard’s accomplishments are unique. Her voluminous writings encompass theology, prophecy, poetry, hagiography, medicine, and natural science as well as extensive correspondence with major figures of the twelfth century including Bernard of Clairvaux, Queen Eleanor of Aquitaine, and the Emperor Frederick Barbarossa. Hildegard is also the first known female composer in the Western world and wrote Europe’s first morality play—with accompanying music. She invented her own artificial language as well as an alphabet in which to write it. An ardent supporter of Church reform, she made four long preaching tours along the river valleys of southwestern Germany. There she addressed admiring audiences of clerics, monks and laity, an unprecedented privilege for a medieval woman. She achieved all this despite chronic ill-health and while serving as a Benedictine abbess for more than forty years
Hildegard was born near Mainz in 1098, tenth child of an ancient noble family. Her parents offered her as a living “tithe” to God by placing her in the care of a holy recluse named Jutta attached to the male Benedictine abbey of Disibodenberg. Hildegard learned to read from the Psalter and immersed herself in the Bible, her lifelong font of knowledge. At fifteen, she made her profession as a nun in the community that coalesced around Jutta. In 1136, after Jutta died, Hildegard was chosen superior. By 1150, the convent had become overcrowded. Despite grumbling from the local monks—as well as her own nuns--Hildegard built a new home for her community beside the Rhine at Rupertsberg near Bingen. A second foundation across the river at Eibingen followed fifteen years later. The later cloister still functions as the Abbey of St. Hildegard and enshrines her relics.
Nothing would have seemed extraordinary about Hildegard for the first half of her long life. She did not wish to publicize the visionary experiences she had been having since the age of three when a blaze of dazzling brightness burst into her sight. A diffuse radiance which she called her visio filled her field of vision for the rest of her life without interfering with ordinary sight. Hildegard came to understand this phenomenon as “the reflection of the living Light” which conferred the gift of prophecy and gave her an intuitive knowledge of the Divine. 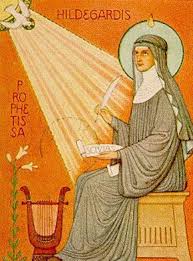 Hildegard’s visions were not apparitions or dreams. She scarcely ever fell into ecstasy but rather perceived sights and messages with the “inner” eyes and ears of her soul. She dictated what she “saw” and “heard” to secretaries while fully lucid. Because the astonishing images she described and directed artists to illustrate feature sparkling gems, shimmering orbs, pulsating stars, curious towers and crenellated walls, modern psychologists have suggested that Hildegard suffered from a form of migraine called “scintillating scotomata.” The debilitating illnesses that preceded or accompanied her visionary episodes might have been migraine attacks. Because supernatural communications are received according to the capacity of the receiver, neurology can offer insights on Hildegard’s particular repertory of forms. But it cannot explain away her experiences or the religious meanings she assigns to them. These were genuine occasions of contact between Hildegard and God.

In 1141—on a date she was careful to record exactly—heaven opened upon Hildegard as “a fiery light of exceeding brilliance” and a mighty voice commanding her to “tell and write” what she sees of God’s marvels. Like Jeremiah and several other prophets, Hildegard quailed at her call. Pleading her sickly female constitution and lack of formal education, she fell ill. But she confided in the convent’s provost, who shared the matter with his abbot at Disibodenberg who urged Hildegard to accept her call. She rose from her bed and set to work on her first book, Scivias.
Hildegard also asked advice from Bernard of Clairvaux who also encouraged her. Meanwhile, her local abbot notified the archbishop of Mainz who mentioned Hildegard to Pope Eugenius III, then visiting Germany. After a papal commission reviewed chapters of Scivias, the pope approved Hildegard’s writings and read portions to a regional synod at Trier in 1147.
Now certified by the highest authorities, Hildegard became a celebrity seer whose counsel was treasured by rulers, clerics, and laypeople from England to Byzantium. Visitors streamed to her convent seeking advice and cures from the “Sibyl of the Rhine.” (This fame was one reason why the Disibodenberg monks opposed Hildegard’s move to a new location.) Hildegard always distinguished between her own opinions and God’s. When she had no answer she would say so and claimed no heavenly authority for her medical and scientific writings.

Hildegard’s steady humility kept her on the straight way and protected her from censure. She clung to the Old Testament role of Prophet, presenting herself as a feeble instrument of the Almighty, pressed into service because sinful churchmen had failed to act. Similar “modesty” strategies have been used by other holy women and female leaders in male-dominated societies who invoke the Biblical theme of weakness overturning strength. 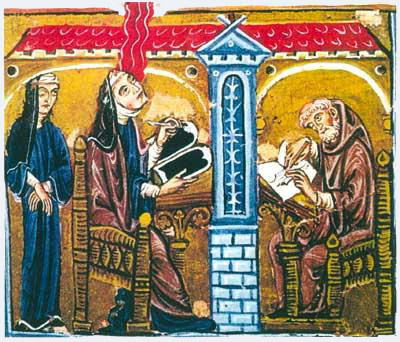 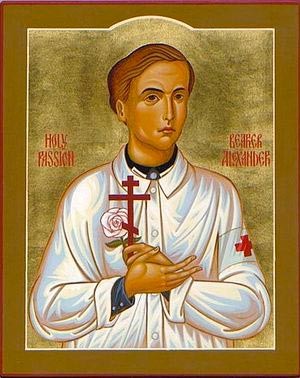 Saint Alexander Schmorell was glorified by the Russian Orthodox Church Outside Russia over the weekend. Born in Russia in 1917 and baptized in the Orthodox Church his family fled to Germany to escape the Bolshevik Revolution.  He remained deeply religious throughout his short life.  A gifted artist St. Alexander was a medical student when he was recalled to military service in support of the Nazi invasion of the USSR.  While serving as a combat medic on the Eastern Front he was horrified by the treatment of enemy prisoners of war and civilians.  In 1942 he returned to his medical studies in Munich where he helped organize the "White Rose" society dedicated to resisting Hitler and the Nazi regime.  In due course he and the other members of the resistance were arrested by the Gestapo.  Following a kangaroo court trial St. Alexander Schmorell was executed on July 23rd (NS) 1943 at the main prison in Munich.

The Russian Orthodox Church Outside of Russia has canonized Russian national Alexander Schmorell, a native of Orenburg, who was executed by the Nazi regime in 1943 for organizing an anti-fascist student group called the White Rose, the Church Bulletin publication reported.

ROCOR separated from ROC in 1927 because its members deemed that ROC leadership’s loyalty to the Bolshevik state was inappropriate.

The canonization took place in Munich’s Cathedral of Holy New Martyrs and Confessors of Russia and was led by Archbishop Mark of Berlin and Germany.

A procession with crosses and icons was held on Saturday in Munich to mark the canonization, the head of an Orenburg charity said. The procession was followed by a memorial service at Schmorell’s grave.

Schmorell, born in 1917, was the son of a German who moved to Russia in the 19th century. His mother was the daughter of an Orthodox Christian priest. In 1921 the family decided to return to Germany and moved to Munich, where Schmorell became a parishioner of a Russian Orthodox church.

After returning from the front in 1942 following years of service in the German army as a military doctor, Schmorell organized, together with his colleagues Hans and Sophie Scholl and Christophe Probst, the White Rose movement and started distributing anti-Hitler leaflets. They were guillotined the following year.


SLIDESHOW OF THE CANONIZATION (click)
All thanks to OrthCath


see more on St Alexander in this blog
Posted by Father David Bird O.S.B. at 22:39

Time passes on hand basically, I do think! Might that turn out to
be possible to provide you with your web site translated right into Chinese?
English will be my 2nd dialect.
Have a look at my website - Remedies For Genital Warts

I actually don’t be aware earn money found themselves the following, even so
believe that this information is unexpected.
I personally don’t realize whom you are on the other hand unquestionably you will definitely be a prominent blog writer,
if you're not presently.
Feel free to surf my webpage Instant Car Insurance Quote