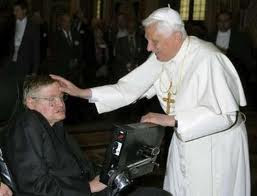 The famous theoretical physicist Hawking was recently interviewed by The Guardian, and revealed that he does, in fact, believe in and worship a god—the name of which is "Science":
What is the value in knowing "Why are we here?"
The universe is governed by science. But science tells us that we can't solve the equations, directly in the abstract. We need to use the effective theory of Darwinian natural selection of those societies most likely to survive. We assign them higher value.
I'm not a physicist, and science was not my favorite subject in high school, but I do know that science (from the Latin, scientia, "having knowledge"), as defined by about any dictionary worth buying, is "an area of knowledge that is an object of study" and/or "knowledge covering general truths or the operation of general laws especially as obtained and tested through the scientific method" (Merriam Webster). So how is it that the study of general laws, which are obtained and tested through the "scientific method"—a human construct and enterprise, correct?—governs the universe? And, no, I'm not being entirely flippant, because while I know that this surely must not be what Hawkings is saying, it iswhat he is saying. Put another way, he renders science as some sort of abstact, objective giver of truth, and thus seeks to do away with the possibility of God as understood by Christians (as he attempted to do last year). More from the interview:
You've said there is no reason to invoke God to light the blue touchpaper. Is our existence all down to luck?
Science predicts that many different kinds of universe will be spontaneously created out of nothing. It is a matter of chance which we are in.
Was that an answer? Argument? Or simply the pronouncement of a prophet of the god, Science? Should we blithely accept that logic, reason, order, structure, study, and even science can exist—and be proclaimed trustworthy to boot—in a universe/cosmos that came into existence through random chance, has no extrinsic meaning or purpose, and "just is"? Hmmm. It sounds sketchy, at best.


Actually, it's completely unfair to speak ill here of science, because it's not science's fault (since science is an area of knowledge that utilizes a particular method of study, and is thus impersonal) that Hawking seems to be misusing or playing fast and loose with it. Hawking is, whether he knows it or not, following the lead taken by Comte, who claimed (again, in rather pontifical style), "Theology will necessarily vanish in the presence of physics". He is a disciple of scientism, which is a philosophical, pehaps even theological, system of belief. The Dutch philosopher William A. Luijpen, in Phenomenology and Atheism (Duquesne University Press, 1964), wrote of how the "closed realm of the physicist" often leads scientists to embrace atheism. And:
Having resolved to question the objects and phenomena of nature only from the standpoint of measurements, [the physicist] deliminates his field of presence in such a way that nothing that is not quantitative can ever arise in it. In other words, the realm in which the physicist is interested is fundamentally closed. This does not mean that his dialogue with the world is ever finished and complete, but it means that his realm is, as a matter of principle, delimited in such a way that, from the standpoint of the thematizing project of the physicist, nothing can ever come into view except the quantitative. If, nevertheless, the physicist introduces something else, he thereby abandons the questioning attitude that is characteristic of him. For instance, he can be impressed by the greatness of what he sees and call is beautiful, but he thus goes beyond his pursuit as a physicist. In physical science itself nothing is "great" or "beautiful." At the same time, however, it follows that on the basis of his physical science along he can never deny that something is great or beautiful. (pp. 62-3)
A bit later, Luijpen argues, "All this clearly indicates that the physicist, on the basis of his science, lacks competence to deny the existence of the Creator-God, which is affirmed by the believer. The fact that such a denial has been made by scientists in the past, and is made even today, reveals a frightful want of insight into the nature of knowledge." This statement is all the more interesting when read along with the following remarks from Hawking's interview:
So here we are. What should we do?
We should seek the greatest value of our action.
You had a health scare and spent time in hospital in 2009. What, if anything, do you fear about death?
I have lived with the prospect of an early death for the last 49 years. I'm not afraid of death, but I'm in no hurry to die. I have so much I want to do first. I regard the brain as a computer which will stop working when its components fail. There is no heaven or afterlife for broken down computers; that is a fairy story for people afraid of the dark.
How, then, does science/physics inform us about "the greatest value of our action"? This is like watching actors testifying before Congress about farm bills or economics: everyone is very serious and there is much ponderous head-nodding, but does anyone really think that William Flowinghair, star of The Jaded Nightquest, should really be treated as an expert on the challenges of making a living on 5,000 acres of turnips in Iowa? Which is not to say that Hawking's knowledge or wisdom is necessarily limited to physics, or that he doesn't have a right to say anything at all about his beliefs regarding the Meaning of Everything. No, it is simply to note that when a physicist—even a theoretical physicist—moves into the realm of philosophical or theological musings, folks should keep in mind that he might not be on solid ground or expressing cogent ideas precisely because physics and science, properly speaking, don't tell us anything about "values" and the meaning of life.
Luijpen's remarks as similar to those found in a modestly-titled book, Introduction to Christianity (Ignatius Press, 2004; 2nd edition), originally published in 1968 by then-Fr. Joseph Ratzinger. In the chapter titled, “Faith in God Today”, Ratzinger outlined an argument for God’s existence based on intelligibility that is directly relevant to Hawking's remarks in particular, but also in general to the ongoing clash (supposed or real) between faith and science.


"This life is much too much trouble, far too strange, to arrive at the end of it and then be asked what you make of it and have to answer, ‘Scientific humanism.’ That won’t do. A poor show. Life is a mystery, love is a delight. Therefore, I take it as axiomatic that one should settle for nothing less than the infinite mystery and infinite delight; i.e., God." ("Questions They Never Asked Me," p. 417)
In a nutshell, Hawking can explain much about the physical world. But he cannot explain himself. He cannot account for the mystery of man. He would do well, in all of his genius, to consider these words from Pope Ratzinger:
God made the world so that there could be a space where he might communicate his love, and from which the response of love might come back to him. From God’s perspective, the heart of the man who responds to him is greater and more important than the whole immense material cosmos, for all that the latter allows us to glimpse something of God’s grandeur.
Related on Ignatius Insight:
• Excerpts from Chance or Purpose: Creation, Evolution, and a Rational Faith | Christoph Cardinal Schönborn
• The Mythological Conflict Between Christianity and Science | An interview with physicist Dr. Stephen Barr | Mark Brumley
• The Universe is Meaning-full | An interview with Dr. Benjamin Wiker, co-author of A Meaningful World | Carl E. Olson
• Deadly Architects | An Interview with Donald De Marco & Benjamin Wiker | Carl E. Olson
• The Mystery of Human Origins | Mark Brumley
• Designed Beauty and Evolutionary Theory | Thomas Dubay, S.M.
Posted by Carl Olson on Tuesday, May 17, 2011 at 12:01 AM | Permalink
Digg This | Save to del.icio.us
Posted by Father David Bird O.S.B. at 04:57