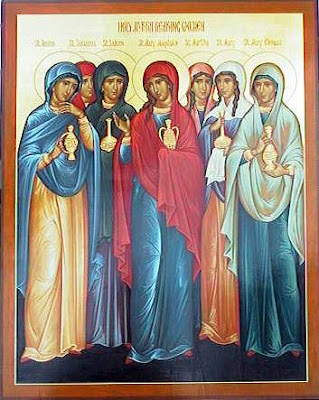 SUNDAY of THE MYRRH-BEARERS

On this day, the third Sunday of Pascha, we celebrate the Feast of the Holy Myrrh-Bearing women; and we also commemorate Joseph of Arimathæa, who was a secret disciple, and also Nicodemos, who was a disciple by night.

The women disciples bring myrrh unto Christ.
And I bring a hymn as it were myrrh unto them? 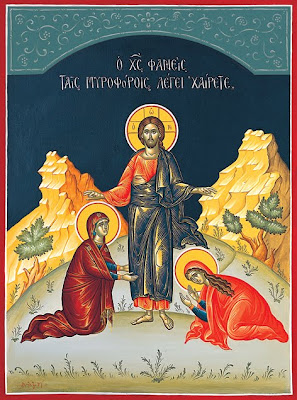 Of these Saints, the women were the first and unerring witnesses of the Resurrection of Christ, while Joseph and Nicodemos were witnesses of His burial, which are the primary and most essential elements of our dogmatic teaching. For Nicodemos was expelled from the synagogue as soon as he decided to part company with the Jews, while Joseph, after burying the Lord’s body, was cast by the Jews into a pit, from which he was snatched up by Divine power and brought to Arimathæa, his homeland. After arising, Christ appeared to him while he was still in fetters, and gave him greater assurance of the mystery of the Resurrection. Although Joseph suffered greatly at the hands of the Jews, he was no longer able to keep silent about this mystery, but boldly recounted to everyone what had happened. It is said of Nicodemos that, by virtue of his writings, he was the first to explain in detail the events surrounding the Passion and Resurrection of Christ, because, coming from the synagogue, he was better informed about the schemes and deliberations of the Jews, and, in short, he knew everything about them. And because, as we have said, Joseph and Nicodemos were reliable witnesses of the Lord’s burial, they were ranked together with the women who beheld the Resurrection. 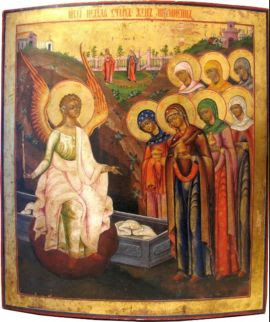 These women were the first to behold the Resurrection, and it was they who announced the glad tidings to the Disciples; for it was fitting that the sex which had first fallen to sin and had inherited the curse should be the first to behold the Resurrection and to hear the joyous greeting, having formerly heard the words: “in pain thou shalt bring forth children.” They were called Myrrh-Bearers, because Joseph and Nicodemos, being in a hurry to bury the body of the Lord on the Friday, since the next day was the great day of the Sabbath, anointed it according to Jewish custom, but not as they ought to have done; they only anointed it with aloes and spices, wrapped it in a winding-sheet, and committed it to the grave; for this reason, having an ardent love for Christ, as disciples of His, these women purchased costly myrrh and came by night, both for fear of the Jews and because the Law permitted them to mourn earlier in the day and to anoint the body, thereby making up for a deficiency that had been due to pressure of time. When they arrived at the tomb, they saw different sights: the two shining Angels inside the tomb, and the other sitting on the stone; after this, they beheld Christ and worshipped Him; St. Mary Magdalene asked Him about Himself as if He were the gardener. 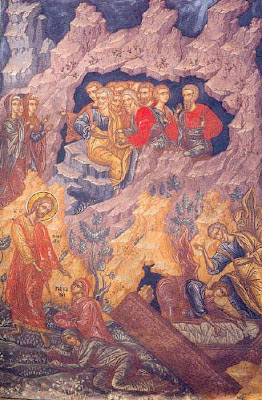 Many were the Myrrh-Bearers, but the Evangelists mentioned only the important ones, leaving the others aside. First of them all was Mary Magdalene, from whom Christ had cast out seven demons; after the Ascension of Christ, she went to Rome, as the story has it, and delivered Pilate and the High Priests to an evil death, after relating to the Emperor Tiberius the events surrounding Christ; she later reposed in Ephesus and was buried by St. John the Theologian; her Relics were translated to Constantinople by Emperor Leo the Wise. The second was Salome, who was a daughter of St. Joseph the Betrothed and whose husband was Zebedee; she gave birth to St. John the Evangelist and St. James. For Joseph had begotten four sons: James, called the Less, Joses, Simon, and Jude; and three daughters: Esther, Thamar, and Salome, the wife of Zebedee. Hence, when you hear in the Gospel about Mary, the mother of James the Less and Joses, keep in mind that she is the Theotokos; for the Theotokos was reckoned to be the mother of the sons of Joseph, and, as it turns out, St. John the Evangelist was a nephew of Christ, since he was the son of a sister. The third of the Myrrh-Bearers was Joanna, the wife of Chuza, the administrator and steward of King Herod’s household. The fourth and the fifth were Mary and Martha, the sisters of Lazarus. The sixth was Mary, the wife of Clopas, whom some call Cleopas. The seventh was Susanna. And there were very many others, as the Divine Luke records, who supported Christ and His Disciples from their own resources. 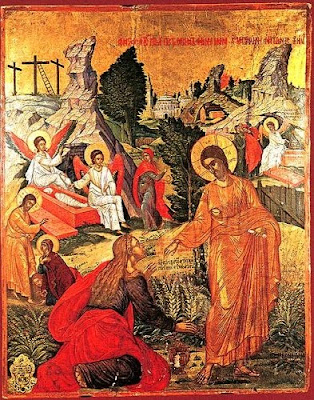 Because these women proclaimed the Resurrection and contributed greatly to assuring us, with utter certainty, of Christ’s Resurrection, the Church of God received the tradition of celebrating them after St. Thomas, for they were the first to see Christ risen from the dead, preached the message of salvation to all, and most excellently pursued the life according to Christ and as befitted women who were disciples of Christ.

By the intercessions of the Holy Myrrh-Bearers, O God, have mercy on us. Amen. 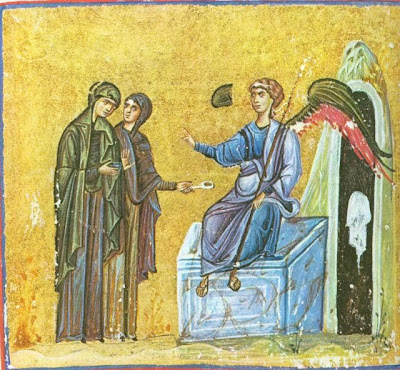 Apolytikion in the Second Tone
When Thou didst descend unto death, O Life Immortal, then didst Thou slay Hades with the lightning of Thy Divinity. And when Thou didst also raise the dead out of the nethermost depths, all the powers in the Heavens cried out: O Life-giver, Christ our God, glory be to Thee. Glory... The noble Joseph, taking Thine immaculate Body down from the Tree, and having wrapped It in pure linen and spices, laid It for burial in a new tomb. But on the third day Thou didst arise, O Lord, granting great mercy to the world. Both now... Unto the myrrh-bearing women did the Angel cry out as he stood by the grave: Myrrh oils are meet for the dead, but Christ hath proved to be a stranger to corruption. But cry out: The Lord is risen, granting great mercy to the world.

Kontakion in the Second Tone
When you said to the Myrrh-bearers, "Rejoice!", O Christ our God, You ended, by Your Resurrection, the lament of Eve, the first mother. And, You commanded Your Apostles to proclaim, "The Savior has risen from the grave."