Monks and MERMAIDS. Why Mermaids? 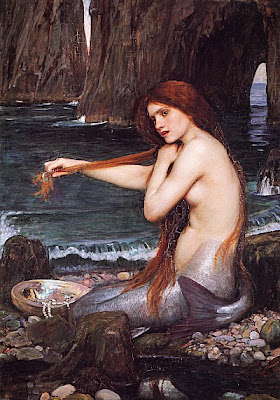 Outside the the mind of some crazed Celtic hemit on an island in the North Sea, what possible connection could there be between monks and mermaids?   Why call a serious blog on monastic life "Monks and Mermaids?   This is the story behind the name.

It all began on a very hot day in the summer of 1996, in northern Peru, four and a half degrees below the Equator.  I had just celebrated Mass and was crossing the square to go to my house and breakfast.   A little boy of about eight ran up to me, clasped my hand and asked, "Would you please let me see the 'sirena'?"  I didn't know what a sirena is, dismissing the picture of Ulysses strapped to a mast as irrelevant.   "I am afraid I do not have any sirenas" I answered.   He nodded and ran off, and I forgot the incident.

A couple of days later there was a knock at my door, and some secondary school boys were waiting for .  me with expectant faces.  "Can we see the sirena?" they asked.   I asked them what a 'sirena' is and was told, "Half woman, half fish".   I then said that I didn't have a sirena, nor did I believe that such ceatures exist.
"But everybody says you have a mermaid is your bedroom," one said, and the others nodded.  "What do they say?" I asked.   "That you were walking on the beach and came across a ten year old mermaid with blue eyes and golden hair, with a fishhook in her throat.   You took her to the hospital and saved he life.   In gratitude, she gave you a scale of pure gold from her tail.   Now she is in a tank full of sea water in your bedroom."

At that point, perhaps I should have directed the boys to my bedroom,  but I thought that a denial would be enough.  I denied it, and they went away disatisfied.   In the days that followed, more and more people came to stand outside my house with the hope of catching a glimpse of the mermaid,   Then it became a news story on local radio.   The crowds swelled from other cities and towns, from Sullana,.Puira, Chiclayo and Trujillo.   It was not long before I received a visit from a television crew.

The television interviewer asked straight out if I had a mermaid in my bedroom.   When I denied it he answered that he never thought I had, but that the rumour had spread all over the place.   A Protestant pastor had made it the subject of his sermon.  It was another sign of the end of the world,  he said, and people should take note that this child of the devil was being given hospitality by a Catholic priest.   I hooted with laughter at that. A couple wanted to adopt the mermaid because they had no children of their own; and people were scouring the beaches to look for the parents who must, they reasoned, be very preoccupied about their lost ten-year old child.   The camera crew departed, and the interview was seen by friends in other parts of Peru.

If everybody knew that Fr David had a mermaid in his bedroom, why was I lying?  Well, there were some with dirty minds.  "But she is supposed to be ten years old!" I exclaimed.   Another suggestion was that I didn't want the Archbishop to know.   That made sense.  If I had a mermaid in my bedroom I would have been careful not to let him know.  Once  I had had a pregnant girl in my house until after she gave birth to a child; and he never learnt about that.   I just happened to believe that anything is better than an abortion.   Others hit on an even better idea.   The mermaid had blue eyes and fair hair: she was obviously not a Peruvian mermaid!!   Fr David was going to England on holiday in two months and probably wanted to return her to British waters.

After having denied the mermaid's existence on television, people began to reluctantly believe me.   After all, as everybody knows, people don't lie on television.   However, in conversations with people afterwards, I learnt that the local fishermen believed in mermaids, and some even said they had seen them, and that there is a rock near the shore where they can be seen; and, if anyone tries to reach them, he disappears for ever.  When everything had died down and the mermaid had faded into the past, a young worker wearing the overalls and helmet of some company or other came to see me.   Is it true, he asked, that I had had a mermaid in the house?  The reason why he asked, he said, was that he had seen a mermaid combing her hair while he was working on the lighthouse.   He caught her in the beam of his helmet lamp and watched her for a short time before she disappeared.   I asked him if he had told anyone what he had seen, and he replied that he had: so it was the subject of conversation some days before the little boy asked me.

Only two or three years ago did I learn  from a school teacher how the story of my involvement with a mermaid came about.   Near the parish house, with its wall facing the beach, is the primary school of "Cristo Rey"; and on one sweltering hot day in 1996, two little boys of ten tried to climb the wall and so escape to spend a day playing on the sea shore, instead of attending classes.   However, they were caught by a teacher and were marched to the office of the headmistress.
"We were not trying to escape, Miss!" exclaimed one of them.
"What, then, were you trying to do?" asked the headmistress.
"We were looking for the mermaid," said the boy in desperation.
In her excitement, the headmistress forgot that little boys sometimes tell lies.
The boys saw that their headmistress was giving them a way out of trouble; and so they began their tale, all about the parish priest, Fr David, walking on the shore and finding a mermaid of their own age with a fishhook in her throat......

Good gravy, I didn't know Benedictines were funny! God bless you, I roared at this!