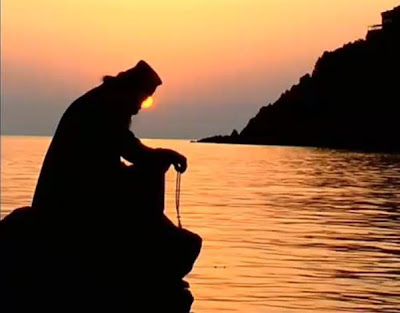 Posted by Macrina Walker
It has perhaps seemed remarkable to many a reader of The Way of a Pilgrim that the traditional formula for the perpetual prayer of the heart goes: “Lord Jesus Christ, have mercy on me, a sinner.” He may have been surprised that this centrepiece of the hesychastic tradition in the Eastern Church is actually a sort of penitential prayer. Anyone who has read the chapter about the tears of metanoia, though, will not be surprised. Rather, it will seem to him quite consistent that the Fathers finally agreed upon this formula, which we do not hear about in the early period of monasticism. For it reflects perfectly that spirit which from the beginning inspired the Fathers in their endeavours. (113)
In this third section of the third chapter of Earthen Vessels: The Practice of Personal Prayer According to the Patristic Tradition, Father Gabriel (Bunge) outlines the development of what has come to be known as the Jesus Prayer, which originated in the Desert tradition of using oft-repeated phrases in prayer, and which is rooted in an attitude that calls out to God for help. This practice of short invocations goes back to the origins of monasticism and soon became known outside of Egypt. Evagrius advocated frequent and uninterrupted prayers like “spear thrusts” that were often comprised of scripture verses. While Evagrius did not seem to know of any fixed formula, Saint John Cassian passed on the Egyptian tradition of praying “O God, come to my assistance, O Lord, make haste to help me.” Abba Ammomas advised a monk to recall the prayer of the tax collector – “God, be merciful to me, a sinner” whereas Abba Macarius the Egyptian, when asked “How should we pray?” answered:

It is not necessary to ‘rattle on,’ but one has only to stretch out one’s hands and say, ‘Lord, as you will’ and ‘as you know’, ‘have mercy on me!’ On the other hand, if a battle is impending, pray, ‘Lord, help me!’ He himself knows what is necessary and treats us with mercy. (116)
Whatever the differences in form, these “ejaculatory prayers” are all cries of help to God. This is what Evagrius meant when he recommended “praying, not like the Pharisee, but like the tax collector,” for

The spirit common to all of these ejaculatory prayers is the spirit of metanoia, of remorse, conversion, and repentance. Precisely that spirit, then, which alone is capable of accepting the “glad tidings” of “reconciliation in Christ”.
The time is fulfilled and the kingdom of God is at hand. Repent and believe in the gospel. [Mk 1:15]
Without “conversion” (μετἀνοια) there is no faith; without faith there is no share in the gospel of reconciliation. For this reason the sermons of the apostles, which Luke has preserved for us in his Acts of the Apostles, almost without exception end with this call for “conversion”. This metanoia, however, is not a single act, but rather a life-long process. The “spirit of repentance”, that is, humility that comes from the heart, is not attained once and for all. A lifetime is not sufficient to “learn” from Christ this essential feature, which, as he himself tells us, is his distinguishing characteristic. The practice of repeating over and over again – audibly or in one’s heart – this “supplication” (which was discussed in the previous chapter), in the spirit of the remorseful tax collector, is one of the best means of vigilantly maintaining an interior desire for genuine metanoia. (117-118)
These prayers were usually directed to Christ, even if, in the case of psalm verses, this was not always explicit.

The formula that later became usual, “Lord Jesus Christ, have mercy on me”, merely says explicitly what was meant implicitly from the beginning, namely, that “there is no other name under heaven given among men by which we must be saved.”, except through the Name of Jesus Christ. Therefore it is with good reason that the Fathers later gave particular emphasis to this salutary affirmation of “Jesus the Christ” – to the extent of developing a full-fledged mysticism of the Name of Jesus. For the person who prays with a “supplication” consciously takes his place among the blind and the lame, and so on, who cried out to Jesus for help during his life on earth. They did this in a way that is in fact appropriate only when one is turning to God – and thus they demonstrated more clearly than by any verbal profession their faith in the Divine Sonship of the Redeemer. (119-120) 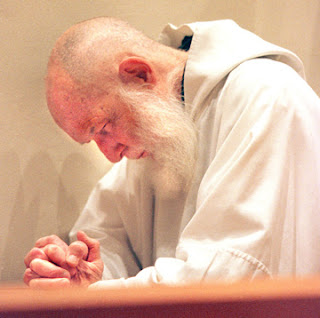 God you have made us for yourself - our hearts are restless


Almighty God,
you have made us for yourself,
and our hearts are restless
till they find their rest in you;
so lead us by your Spirit
that in this life we may live to your glory
and in the life to come enjoy you for ever;


through Jesus Christ our Lord
who is alive with with you and the Holy Spirit,
one God now and for ever.
Amen.


We humans are enfleshed yearning. St Augustine said it well at the start of his Confessions, "God, you have made us for yourself, and our hearts are restless till they find their rest in you." We constantly desire more, and better, and different. Cars, gadgets, toys. It is not just that we have a God-shaped hole alongside other differently-shaped holes, as if our television fills and satisfies our television-shaped hole. It appears to me that people try and put their television (replace with your own recent want-it) into their God-shaped hole. But our God-shaped hole, our yearning is infinite. No amount of televisions, no television of whatever quality or value, will ever fill it. Only God.


Some would say that our desire for a god, our desire for transcendence, our inability to satisfy our yearning, this is the source of the human creation of the concept of God. Yeah Right! [As the NZ Tui advertisements would have it]. In a comprehensible reality, which I believe I am part of, thirst points to the existence of water (somewhere - I might not be in the right place to satisfy that thirst). Hunger points to the existence of food somewhere. Sexual desire points to the existence of the possibility of its satisfaction. And so on. Might not our very yearning for transcendence, for a god - rather than argue for atheism argue more strongly for the One in whom my restless, yearning heart will find its rest?


Too quickly some spiritualities denigrate our desires. As if we should ignore them. Flee from them. I suggest that our Creator gave us our desires for a reason. I am not surprised that the subtitle of the monastic book Trappist is "living in the land of desire". I am not suggesting that all our desires, our yearning is satisfied in this limited world of space and time. The very opposite. We are creatures who do not find our ultimate fulfillment in this creation.


We might often during the day in our minds repeat Augustine's phrase "God, you have made us for yourself, and our hearts are restless till they find their rest in you." Augustine's prayer might become our own. Other similar ones might accompany us during the day as we chew them over: "my soul is yearning for you, my God" (Ps 42:1), "O God, you are my God, for you I long" (Ps 63:1), "You have seduced me, O God, and I have let myself be seduced" (Jer 20:7 - this last one was repeated many times in the film Into Great Silence).


Such short prayers, "arrow prayers", "ejaculations" (how close our prayer language can be to other intense human desires - see the Jeremiah quote above), can be a significant spiritual discipline, a Christian equivalent to a mantra, alongside other disciplines to sanctify the day.


This collect is an adaptation of the new collect prepared by the CofE Liturgical Commission based on Augustine's "quia fecisti nos ad te et inquietum est cor nostrum donec requiescat in te". That ASB collect has been revised again (it retains there its Pentecost 18/Trinity 17 position):

you have made us for yourself,
and our hearts are restless till they find their rest in you:
pour your love into our hearts and draw us to yourself,
and so bring us at last to your heavenly city
where we shall see you face to face;
through Jesus Christ your Son our Lord,
who is alive and reigns with you,
in the unity of the Holy Spirit,
one God, now and for ever.


The NZ revisers might have been more creative in the address of God, rather than once again returning to the default of "Almighty God", a title, whilst not contrary to Augustine, that was not used by him at this point.
Posted by Father David Bird O.S.B. at 17:06

Please add our blog to your blogroll.

Following the great blessings that came from the Year for Priests we thought that a Holy Year for Nuns would be a great blessing to the Church. You are very welcome to adopt the idea and we would be very happy if you would promoted it: