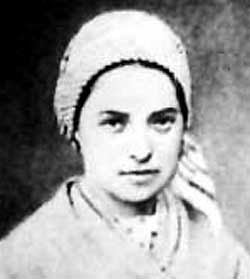 I had gone down one day with two other girls to the bank of the river Gave when suddenly I heard a kind of rustling sound. I turned my head toward the field by the side of the river, but the trees seemed quite still and the noise was evidently not from them. Then I looked up and caught sight of the cave where I saw a lady wearing a lovely white dress with a bright belt. On top of each of her feet was a pale yellow rose, the same color as her rosary beads. At this I rubbed my eyes, thinking I was seeing things, and I put my hands into the fold of my dress where my rosary was. I wanted to make the sign of the cross, but for the life of me I couldn’t manage it, and my hand just fell down. Then the lady made the sign of the cross herself, and at the second attempt I managed to do the same, though my hands were trembling. Then I began to say the rosary while the lady let her beads clip through her fingers, without moving her lips. When I stopped saying the Hail Mary, she immediately vanished. I asked my two companions if they had noticed anything, but they said no. Of course, they wanted to know what I was doing, and I told them that I had seen a lady wearing a nice white dress, though I didn’t know who she was. I told them not to say anything about it, and they said I was silly to have anything to do with it. I said they were wrong, and I came back next Sunday, feeling myself drawn to the place…. The third time I went, the lady spoke to me and asked me to come every day for fifteen days. I said I would and then she said that she wanted me to tell the priests to build a chapel there. She also told me to drink from the stream. I went to the Gave, the only stream I could see. Then she made me realize she was not speaking of the Gave, and she indicated a little trickle of water close by. When I got to it I could only find a few drops, mostly mud. I cupped my hands to catch some liquid without success, and then I started to scrape the ground. I managed to find a few drops of water, but only at the fourth attempt was there sufficient for any kind of a drink. The lady then vanished and I went back home. I went back each day for fifteen days, and each time, except one Monday and one Friday, the lady appeared and told me to look for a stream and wash in it and to see that the priests build a chapel there. I must also pray, she said, for the conversion of sinners. I asked her many times what she meant by that, but she only smiled. Finally, with outstretched arms and eyes looking up to heaven, she told me she was the Immaculate Conception. During the fifteen days she told me three secrets, but I was not to speak about them to anyone, and so far I have not. - from a letter by Saint Bernadet

Here are a couple of excerpts from Pope Pius XII's 1957 wonderful encyclical, Le Pelerinage de Lourdes, (Encyclical "Warning Against Materialism in the Centenary of the Apparitions at Lourdes...",, July 2, 1957):


The fiftieth anniversary of the definition of the dogma of the Immaculate Conception of the Blessed Virgin gave Saint Pius X occasion to bear witness in a solemn document to the historic connection between this act of the Magisterium and the apparitions at Lourdes. "Pius IX," he wrote, "had hardly defined it to be of Catholic faith that Mary was from her very origin exempt from sin, when the Virgin herself began performing miracles at Lourdes." (par. 21)
It could not have been otherwise. Everything about Mary directs us to her Son, our only Savior, in anticipation of whose merits she was immaculate and full of grace. Everything about Mary raises us to the praise of the adorable Trinity; and so it was that Bernadette, praying her rosary before the grotto, learned from the words and bearing of the Blessed Virgin how she should give glory to the Father, Son, and Holy Spirit.
We are pleased in this centenary year to adopt as Our home the homage rendered by Saint Pius X: "The unique glory of the shrine of Lourdes lies in the fact that people are drawn there from everywhere by Mary to adore Jesus Christ in the august Sacrament, so that this shrine - at once a center of Marian devotion and a throne of the Eucharistic mystery - surpasses in glory, it seems, all others in the Catholic world. ... (par. 23-24)
And if in her solicitude Mary looks upon some of her children with a special predilection, is it not, Beloved Sons and Venerable Brothers, upon the lowly, the poor, and the afflicted whom Jesus loved so much? "Come to me, all you who labor and are burdened, and I will give you rest," she seems to say along with her divine Son.
Go to her, you who are crushed by material misery, defenseless against the hardships of life and the indifference of men. Go to her, you who are assailed by sorrows and moral trials. Go to her, beloved invalids and infirm, you who are sincerely welcomed and honored at Lourdes as the suffering members of our Lord. Go to her and receive peace of heart, strength for your daily duties, joy for the sacrifice you offer.
The Immaculate Virgin, who knows the secret ways by which grace operates in souls and the silent work of this supernatural leaven in this world, knows also the great price which God attaches to your sufferings united to those of the Savior. They can greatly contribute, We have no doubt, to this Christian renewal of society which We implore of God through the powerful intercession of His Mother.
In response to the prayers of the sick, of the humble, of all the pilgrims to Lourdes, may Mary turn her maternal gaze upon those still outside the limits of the only fold, the Church, that they may come together in unity. May she look upon those who are in search, who are thirsty for truth, and lead them to the source of living waters. (pars. 56-59) 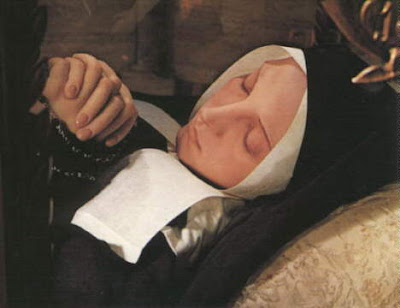 And from a homily given by Pope Benedict XVI in 2008 at Lourdes Rosary Square during his Apostolic Journey to France on the Occasion of the 150th Anniversary of the Apparitions of the Blessed Virgin Mary at Lourdes (Sept. 12-15, 2008):
Lourdes is one of the places chosen by God for his beauty to be reflected with particular brightness, hence the importance here of the symbol of light. From the fourth apparition onwards, on arriving at the grotto, Bernadette would light a votive candle each morning and hold it in her left hand for as long as the Virgin was visible to her. Soon, people would give Bernadette a candle to plant in the ground inside the grotto. Very soon, too, people would place their own candles in this place of light and peace. The Mother of God herself let it be known that she liked the touching homage of these thousands of torches, which since that time have continued to shine upon the rock of the apparition and give her glory. From that day, before the grotto, night and day, summer and winter, a burning bush shines out, aflame with the prayers of pilgrims and the sick, who bring their concerns and their needs, but above all their faith and their hope.
By coming here to Lourdes on pilgrimage, we wish to enter, following in Bernadette’s footsteps, into this extraordinary closeness between heaven and earth, which never fails and never ceases to grow. In the course of the apparitions, it is notable that Bernadette prays the rosary under the gaze of Mary, who unites herself to her at the moment of the doxology. This fact confirms the profoundly theocentric character of the prayer of the rosary. When we pray it, Mary offers us her heart and her gaze in order to contemplate the life of her Son, Jesus Christ. My venerable Predecessor, Pope John Paul II, came here to Lourdes on two occasions. In his life and ministry, we know how much his prayer relied upon the Virgin Mary’s intercession. Like many of his predecessors in the Chair of Peter, he also keenly encouraged the prayer of the rosary; one of the particular ways in which he did so was by enriching the Holy Rosary with the meditation of the Mysteries of Light. … As with all the events in the life of Christ, “which she preserved and pondered in her heart” (Lk 2:19), Mary helps us to understand all the stages in his public ministry as integral to the revelation of God’s glory. May Lourdes, the land of light, continue to be a school for learning to pray the Rosary, which introduces the disciples of Jesus, under the gaze of his Mother, into an authentic and cordial dialogue with his Master! 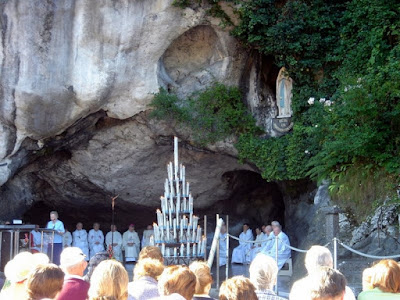