"Music and Faith in My Life and Vision"
Metropolitan Hilarion Alfeyev, archbishop of Volokolamsk and a permanent member of the Holy Synod of the Patriarchate of Moscow
Edward J. Pryzbyla University Center, Great Room
Feb. 9, 2011 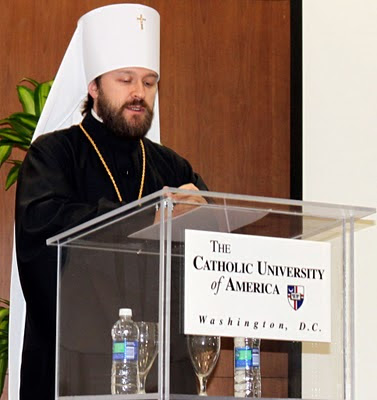 Mr. President, esteemed members of the Academic Senate, professors, teachers, students, dear friends!
First of all, permit me to express my profound gratitude for this invitation. It is a great honour for me to be within the walls of the Catholic University of America once again and to be addressing you. I was last here five years ago and at that time I spoke on Orthodox-Catholic relations. But today you have invited me in my dual capacity of churchman and a representative of culture. Acknowledging that I am not only a hierarch of the Russian Orthodox Church but also a composer, you have asked me to address you on the connection between music and faith as experienced by past and contemporary composers as well as by myself.

This applies also to modern, popular and youth music. There are compositions in popular music imbued with high spiritual content and are written skillfully (for instance, the famous rock opera Jesus Christ Superstar). No doubt, this composition is not in keeping with church criteria, but the author did not purport to present the canonical image of Christ. He achieved his objective outstandingly well by telling the story of Christ’s Passion in a language understandable to the youth and through the medium of contemporary music. I appreciate this music more emphatically than I do the works of many avant-garde composers, since the latter sometimes eschew melody, harmony, and inner content.
Some believe that there cannot be works of art dedicated to Christ except those created within the Church. I do not completely agree with this. Of course, the Church is the custodian of Christ’s teaching and the place of His living presence, but the Church should not seek to “privatize” Christ or declare Him to be her “property.” We should not repeat the mistakes of the Catholic Church made in the Middle Ages. The image of Christ can inspire not only church people, but also those who are still far from her. One should not forbid them to think, speak and write about Christ, unless they are moved by a desire deliberately to distort Christianity and to insult the Church and the faithful.
If a composition is bright, impressive and grips the listeners, if it makes them empathize emotionally with the Gospel events and even weep, if it arouses profound feelings in them, then it deserves high praise. It may be that we meet professionalism and musical skill in works which do not touch our hearts. It may also happen that a composition based on a religious subject turns out to be secular in its content and lacks spirit.
The way to the Christian faith often begins with a discovery of the living Christ, rather than a recognition of the church’s dogmatic truths. Christianity is a religion focused on the living Man, a historic person. The person of this Man appeals astonishingly. It may well be the case that a composition on a Gospel subject, though written by a non-Churchman, is imbued by a veneration of Christ. Many may begin their way to Christ and to the Church through such a composition, even if it were not altogether “canonical”
Posted by Father David Bird O.S.B. at 12:58