A Gifted Boy
Today is also the memorial of Blessed Rafael Arnáiz Barón (1911- 1938), a Trappist Cistercian Oblate of the Abbey of San Isidoro de Dueñas in Spain. I commemorated him at Mass, using Eucharistic Prayer III. Rafael Arnáiz, -- or Brother María Rafael as he was known in his monastery -- was born on 9 April 1911 in the city of Burgos, Spain. He was the first of four sons born to an upper class family with profoundly Catholic values. As a boy Rafael went to Jesuit schools. As Rafael's personality emerged and affirmed itself, it became evident that he had a rich sensibility, as well as intellectual, artistic, and spiritual gifts.
Fully Alive
Rafael was not, by any means, a pious curmudgeon nor was he one of those morbidly pious adolescents without social skills. He was handsome. He loved beauty. He was open to the good things the world had to offer. Rafael was joyful. The rich artistic side of his personality was tempered and perfected by grace.
The Monastic Enchantment
In September 1930, after graduating from Secondary School, Rafael spent his summer holiday with relatives near Avila. During that fateful summer he had his first exposure to monastic life at the Trappist Abbey of San Isidoro de Dueñas. The Cistercian silence called to his soul. The chant of the monks enchanted him. The solemn Salve Regina at the end of Compline took hold of his heart. Three years later, after completing studies in architecture, Rafael entered the monastery as a postulant and, shortly thereafter, was clothed in the white habit of the Cistercian novice.
The Cross
Rafael had only four more years to live. A few months after entering the monastery, he was diagnosed with a virulent form of diabetes. The illness brought with it melancholy and perplexity. Three times the novice’s superiors sent him home to rest and recover his strength. Drafted into the Nationalist Army at the very height of the Spanish Civil War, Rafael was declared unfit for active duty. Returning to the monastery for the last time, he was received as a regular oblate, that is, a man living within the cloister without vows and following a personal rule of life approved by the abbot. Regular oblates were, at that time, somewhat marginalized in monastic communities. Their peculiar status -- monks living without vows and without the security that comes from having made profession -- was not without its own challenges. Rafael entered fully into the vocation of the oblate, understanding that the oblate is destined for the altar, that is, for sacrifice.
Contradictions and Uncertainties
Blessed Rafael, in spite of the brevity and discontinuity of his monastic experience, lived it fully. He remained faithful in the face of bewildering contradictions, uncertainties, and apparent failure. He found the Will of God in weakness, in illness, in war, in the inability to make monastic profession, and in the sufferings inherent in community life.
Maria, Spes Nostra
The Virgin Mary was the love and consolation of Rafael’s life. “It is a pity,” he wrote, “that David [the psalmist] didn’t know the Most Holy Virgin! What marvelous things he would have said about her! A heart as big as his would certainly have been full of love for Mary! Mary! If only I knew how to write!”
Humble Unto Death
Brother Rafael Maria was humble because he accepted one humiliation after another without ever despairing of the mercy of God. He died stripped of everything, without having fulfilled even the legitimate human aspirations that so appealed to him. Configured to the poor and crucified Jesus, he died in the splendour of the resurrection on 26 April 1938 at the age of 27.
A Model For Today's Youth
Pope John Paul II proclaimed Rafael a model for today’s youth and beatified him in 1992. In some ways Blessed Rafael reminds me of the Passionist Saint Gabriel of the Sorrowful Mother; in other ways he reminds me of Saint Benedict Joseph Labre, and also of Blessed Marie-Joseph Cassant. I wonder if his life did not, in some way, inspire that remarkable novel about Cistercian life,Cosmas, or the Love of God by Pierre de Calan.
The whole community is gathered in adoration
to ask the Lord for peace,
to pray for those who are dying and to make reparation for so many sins . . .
But one mustn't spread discouragement. . . .
When we ask for mercy and pardon, we are doing as David did . . .
that is, the Lord will blot out all our sins and those of the whole world,
not by any poor merits of ours,
but by the multitude and the greatness of His mercy.
Blessed Rafael Arnáiz Barón
August 2, 1936 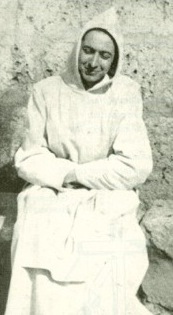