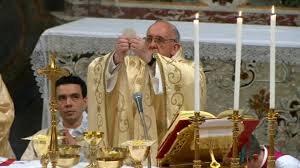 No genius is needed to figure out that Pope Francis is not a liturgist the way Pope Benedict was.
But the fear that Francis’ papacy may mark the “end of the reform of the reform” of the liturgical changes that were introduced after the Second Vatican Council is, frankly, unfounded.
Let me present the evidence.
Although his liturgical gestures as pope have not amounted to much so far, his ministry in the Archdiocese of Buenos Aires convincingly shows his mindset on the liturgy.
In Buenos Aires, then-Cardinal Bergoglio did not express significant interest in the extraordinary form of the rite. However, he put up no resistance to it either. Following Summorum Pontificum, he made the traditional Mass readily available. In fact, Buenos Aires is probably the Latin-American city with the largest number of Masses celebrated in the extraordinary form.
His lack of major interest was not hostility or indifference. Instead, he was concentrating on a far more daunting task: making sure that all of the faithful in his archdiocese had access to a decent Mass.
Let me explain. In Latin America, beside the beautifully and carefully celebrated Masses associated with the major popular devotions, liturgical abuses are still alive and constitute a massive problem in the region.
It is not a situation of omitting or changing the rubrics here and there. The liturgical problems are much more serious. They consist of events like priests “concelebrating” the Mass with the youth at the rhythm of tropical songs in Colombia; “consecrating” cakes with Guayaba marmalade in Venezuela; a “reggae” Mass in Panama; or a priest celebrating with vestments portraying Batman and Robin while squirting holy water with a green-and-red water pistol in Mexico.
This is no exaggeration. Such abuses are happening now.
Cardinal Bergoglio’s efforts for reform in Buenos Aires were not exclusively aimed at the liturgy. He sought to change priestly and sacramental life in general.
One of the most important and successful transformations in the archdiocese, with a significant impact on liturgy, was the cardinal’s approach to the “villero” priests.
“Villa miseria” (miserable town) is the name Argentineans give to shanty towns in major cities. The villero priests were those who dedicated their pastoral ministry to work in these impoverished, usually very violent urban environments.
Although full of pastoral zeal, most of them were identified with Latin America’s theology of liberation, which incorporated Marxist ideas into Christianity as an indispensable means of understanding and dealing with social injustice. And, in general, they had a rebellious attitude towards authority, liturgical rubrics included.
In an interview for a book I recently finished about Pope Francis and his fellow Argentinian Jesuits, Jesuit Father Ignacio Perez del Viso, who taught Jorge Bergoglio as a seminarian, explained that, as archbishop of Buenos Aires, he completely changed the dynamics of the priests and the shanty towns they served.
Father Ignacio explained, “In the ’70s, most bishops would be in constant tension with the villero priests, and, every now and then, one of them would be suddenly transferred or removed altogether.”
“By the ’90s, bishops would tolerate them … but Bergoglio, from the moment he became auxiliary [bishop] in Buenos Aires, changed all that,” he said.
The difference was that Cardinal Bergoglio embraced the priests and their ministry. He would visit them in the shanty towns, send them to rest if they were tired and replace them himself at their parish for a few days. He would personally take care of them if they were in bed sick — essentially, he looked after their particular needs.
The only time he removed a villero priest from a shanty town was to protect him from a local drug lord who sent death threats.
And with the same fatherly solicitude that he used to care for his priests, the archbishop requested that they return to wearing clerics; refrain from using “batata” (an Argentinean sweet potato) instead of unleavened bread to celebrate Mass; and use songs from Catholic songbooks rather than political or secular songs.
Most often, he used persuasion with his pastors to transform the liturgical abuses in Buenos Aires, but also, in the words of a fellow Jesuit, “he never flinched when tough measures were required.”
With the process of secularization and stiffer selection criteria applied to priestly vocations, the number of seminarians dropped during Cardinal Bergoglio’s years as archbishop. But friends and foes agree that the quality of the celebration and preaching dramatically improved in the archdiocese.
I can personally attest that a Catholic’s chances to attend a well celebrated Novus Ordo Mass, with an edifying homily, anywhere in the city on any given day, are very, very high. As someone who travels Latin America and the U.S. on a regular basis, I can attest that very few other major urban areas, if any, can provide a similar rate.
Rich, traditional liturgical gestures at Mass are highly edifying. I have the blessing of living in an archdiocese led by an archbishop who is an expert in the theology of the  liturgy, and I attend a parish with similar treasures.
But the number of Catholics who live under the liturgical tyranny of well-meaning priests who believe that the Mass is theirs and not the Lord’s is way too high in the U.S., in Latin America and around the world.
Returning to the faithful the right to attend a Mass that more fully transmits the experience of actually being the summit of Christian life is still a pending revolution, in many regions.
Pope Francis’ vision of the liturgy as a crucial part of personal conversion, as well as his pastoral experience in Buenos Aires, should be a source for hope rather than suspicion.
This task is Herculean, but let’s just give him time.
Alejandro Bermudez is the translator of On Heaven and Earth, a dialogue between Cardinal Jorge Bergoglio and Rabbi Abraham Skorka (Image Books, 2013).
Read  http://www.ncregister.com/daily-news/pope-francis-and-the-liturgy#ixzz2T5MS5g1i