CHRIST REVEALS HIMSELF TO EACH ONE OF US, NOT IN THE ABSTRACT, BUT THROUGH CONCRETE EXPERIENCES 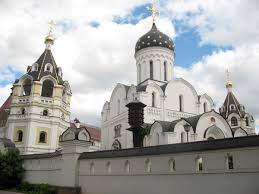 When I went to stay with the nuns of St Elizabeth's Monastery in Minsk, I was met at the airport by a  young man called Anton, one of the many people who serve God by working and praying with the nuns of Minsk.   All those I met were highly intelligent and delightful companions.   He wrote to me yesterday and, as you see, speaks and writes excellent English.   I think this letter gives us a feel of what it is like to Orthodox in Minsk at Pascha.

If anyone who reads this and lives in Canada, in Toronto, Ottawa or Montreal and would like to help, please get in touch with St Elizabeth,s Convent whose address can be found in their page above.  Here is the letter, minus personal details:

As we are going through joyful Easter days we hope to keep this joy in our hearts. Easter celebrations were quite massive here - we had over a thousand people who took holy communion at the night Easter service only (and we had three more Liturgies in the morning!). Then we had our traditional Liturgies at the boarding homes and we also visited patients of different departments of the Hospital and celebrated Moleben (Paraklesis). To everyone's enjoyment we had a concert in the evening with music, poetry and singing involved (I participated with a couple of songs performed with a small band). A few days after a large group of sisters with Father Andrey in the lead visited The Holy Dormition Pskovo-Pechersky (Pskov-Caves) monastery and the Island of Zalit, which, as you definitely know, became known because of the holy life of Elder Nikolai Gurianov who lived there and helped many people who came to him for spiritual help and advice. By God's grace life goes on here in Minsk. The Convent is continuing to grow in numbers which is reflected in construction of new buildings and also many new projects. More importantly, the spiritual life here is not ceasing as well. The Convent had nine new monastic vocations this year - a fact that means much to us, and Father Andrey is putting much hope in it as he stresses its importance. We were also blessed by some remarkable visitors recently. I am going to visit Canada in Summer (Toronto, Ottawa and Montreal). We are looking for any opportunity to display our items: religious or secular events, festivals, street markets, fairs, street holidays and art exhibitions that are sometimes run by city authorities, Christian organizations (pilgrimages, conferences) or communities based on ethnicity (Russian, Belorussian, Ukrainian, Polish centers etc).

GOD IS FOUND, NOT SO MUCH IN BOOKS, AS IN MONASTERIES.

Carrying in image of the "Resurrected Lord" on Easter Day, Ayacucho, Peru.

The Archbishop of Turin venerating the Shroud of Turin, amid claims that new research is in favour of its authenticity

The catholic religion is the foundation of most of the significant festivals in South America. Easter being the most prominent for many, however there are many others and for travellers heading to the region, you should have a look into seeing if any events will be on while you’re there. Carnival is most famously celebrated in Brazil, however it is also celebrated in various ways through the majority of South America.

The weeklong hedonistic experience of Rio Carnival and all other carnivals in South America is actually a celebration of the beginning of Lent. The word ‘carnival’ is said to have originated from the Spanish word for meat (carne) and is a contraction of a phrase meaning ‘farewell to meat’. This is in reference to the preparation for the fasting period of Lent, where all meat and animal products such as eggs, butter and milk are used up. So those more familiar with making a few pancakes in honour of this time, Rio and other parts of Brazil offer a lively alternation. Other significant places to celebrate carnival include Salvador, also in Brazil, and Barranquilla in Colombia. When I was in Peru for Easter, I spent it at a slightly lower profile celebration in the Apurimac region of the southern Andes region. The events were very similar to other parts of the country in regards to the celebrations and processions. I’m not a religious person, but thought the celebrations very interesting, and found it impressive that nearly everyone in the town came together for it. On the night of Holy Friday everyone in the town stayed out all night in an area around the church. to keep them going through the night there was stalls set up selling a range of food a drink. Local Chicha beer (a week beer made from corn) together with besitos (small sweets traditionally taken at Easter time) where the most popular offerings. There was a long procession with effigies of Christ on the Cross and the Virgin Mary carried through the streets. The overall mood was very somber and serious as this was the part of the week where Christ's death was portrayed. Then very early Saturday morning, after a long church service is completed, everyone went to light a small white candle in the church. This itself took several hours due to the amount of people queuing at the doors of the church. It seemed as though everyone in the town was thee to pay their respects. After the night’s events, I went to catch up on some sleep and was awoken around 1pm on the Saturday to join the family with which I was staying for a traditional Easter meal. Throughout most of Peru the Easter feast is known as Doce Platos, which translates as twelve dishes, and is a particularly filling meal made up of 12 separate courses, many of which seemed to be full sized portions. Around half way through the meal nearly everyone begins to struggle, most of the remaining dishes are picked at and left half eaten. With this begins the celebration of the resurrection of Christ, and the remaining celebrations take on a more joyful air. (Peru Photos)
In Oruro, Bolivia, carnival celebrations happen around the same time of year, but take on a slightly darker theme. The indigenous populations in the area blended the catholic teachings of the Spanish, with their own pagan rituals. The Diablada (devil dance) is particular kind of devil worship, owing it’s origins to the mining community who used to perform sacrifices to the devil to protect the miners, in the belief that Satan was their protector when underground. The events in Oruro involve this devil dance as well as other processions decorated with colourful costumes and mask. This event has also influenced another festival the other side of the Andes in Chile. This festival takes place in the village of La Tirana, inland near the Bolivian border in northern Chile, and again takes on a seemingly contradictory blend of the catholic religion with some indigenous devil worshipping, with lots of colourful masks and costumes.

Whilst Catholicism is the dominant religion in South America, people there seemed to be very tolerant of other religions and religious conflict is extremely rare. As a result of this many of the festivals you will witness are in celebration of more than one set of beliefs and whilst often rooted in Catholicism, can also include evidence of their own indigenous cultures and traditions. This makes for some fascinating celebrations and a large degree of regional variety. So make sure you seek out these festivals on your travels, and if the better known events like Rio Carnival are not your thing, venturing of the beaten track at these times, and you’ll likely find some equally intriguing event.

Part of another answer on the same page:

Food is an important part of Easter, especially on Friday where eating meat is not allowed but people instead eat fish in a variety of preparations, my favourite used to be the typical Chupe de Viernes (Friday Soup) made with Crayfish, cheese, milk, potatoes and vegetables. People eat as well variety of desserts like Mazamorra Morada (Jelly made from starch and fruits and colured with purple corn) or rice pudding. On sunday it’s typical to eat in Arequipa the “caldo blanco or seven meats soup” made with beef, lamb, chicken, pork, charqui (dried meat), goats and potatoes and vegetables to celebrate that Jesus is alive again.

Very early on sunday morning the morning in my local square and in many parts across my city a puppet of Judas is burnt and he always makes a will that is usually very funny.