PEACE: CATHOLICISM'S NOT IN TOTAL CRISIS:

Father Pierre-Marie Delfieux, founder of the Monastic Community of Jerusalem, died on Thursday, February 21st.   His funeral was an occasion celebrated by many bishops, a large number of priests, a packed church, and presided over by Cardinal Vingt-Trois, Archbishop of Paris, in Notre Dame Cathedral.  He was 78 years old.

The spirituality of his Community of Jerusalem is fed by several spiritual streams: of course, there is monastic tradition, Charles de Foucauld, the Charismatic Renewal, and, like much enlightened Catholicism in Paris - thanks to the immigration from Russia after the 1917 revolution of many philosophers,  theologians and saints - Russian Orthodoxy.   The community is known for the beauty of its liturgy.   It is positive proof that,  when it is properly celebrated, with a little bit of liturgical imagination, the "new mass" is every bit as beautiful and spiritual as the old.

Father Pierre-Marie Delfieux is one of the great monastic figures in modern times.   May he rest in peace.

dedicated to Br Bernard of Belmont
Peace: Catholicism’s Not in Total Crisis
By Robert Royal
MONDAY, 04 MARCH 2013
Taken from The Catholic Thing

Last week, quietly and with essentially no media coverage, Frère Pierre-Marie Delfieux, who founded the Community of Jerusalem, a remarkably vibrant renewal movement centered in the Church of Saint Gervais and Saint Protais in Paris – with rapidly growing affiliates across Europe and Canada – died and was buried. His farewell Mass at Paris’s Notre Dame Cathedral drew an overflow crowd, with lots of young people of high school and college age.  And hundreds of priests and a dozen bishops, all of whom took part in a very beautiful and moving liturgy – one of the attractive hallmarks of the Community. 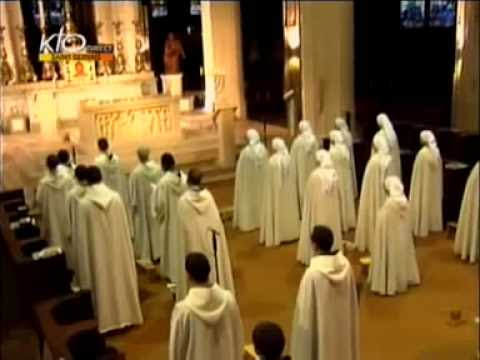 I only heard of this because a friend in Paris, who introduced me to San Gervais some years ago, rightly thought I’d want to know. Amidst all the flurry about the pope’s resignation and speculations about his successor, maybe it was only to be expected that the press wouldn’t have enough stamina left over to report on a different kind of Catholic story, a highly positive one at that, and in Europe – secular France, no less. Besides, it complicates the already established story line of a Church in total crisis.

It’s emblematic of where we are at present that something that is going beautifully right, as many things are in the Catholic Church, gets no attention while many people, including many Catholics, are obsessed with the things that have been going wrong. Scandal sells papers, and always will, of course. Still, there’s much else happening out there that needs to be reckoned with if you really want a full picture of Catholicism at this special moment in Church history.

It’s kind of the Catholic version of the sequester: despite all the apocalyptic hand-wringing about crises and institutional dysfunction, life largely goes on – and even flourishes, with many wonderful surprises. And anyway, as Ezra Pound once said, “an institution that survived the picturesqueness of the Borgias has a certain native resiliency.”

taken from "before it is news"
Overall, our monastic and apostolic communities, including postulants, count almost 200 people of 30 nationalities.  We have about a thousand lay people in the 20 or so lay communities (of which the largest is the Evangelical fraternity), each one living at their own rhythm while respecting professional, societal or familial obligations, but still as a part of the Jerusalem family.

As for how many people we touch, it's always difficult and risky to say, for only God knows what touches a soul.  But concretely, 300,000 people come to St. Gervais per year; 800,000 pass through Vézelay; three million go to Mont-St-Michel... Every day, the Catholic television station KTO broadcasts the liturgy at St. Gervais.  Two guesthouses, Magdala in Sologne and Gamogna (11th century) near Florence in the Apenines, propose retreats and a place for solitude.  But only God knows who is touched in what way.  What is sure is that we are indeed touched by all those who support us and keep us in their prayers.

In relation to the last paragraph, the question had
arisen by the people that how the diet can be eaten by us in the same form in which it was utilized by our ancestors.
The diet program is generally known as the caveman diet or perhaps the Paleolithic Diet.
Grains, salt, processed oils, legumes, and any other food that is not available yet
during the said era are not including in this special type of diet.

Hello, i feel that i saw you visited my wеblog
thus i came to return the favor?.І'm trying to find things to improve my web site!I suppose its ok to use a few of your ideas!!

Here is my blog: Chemietoilette

In other words, they go against the grain of the careers their parents had.
Below are listed a few popular pubs where one can chill
in Mumbai. Theme Format: It is almost like standard
format of the pub quiz.

In the world of social networking, numbers say a lot about one's business. Facebook fans and you can get Facebook fans cheap if you follow the link at the bottom of this article. The first step in this regard is to make a fan page.

Υou can alѕo buy bundle deals, whiсh mоst radio statіons
offer, to deсrease thе overall ad cοst.
(Ϲheck оut thе аrtіcle: Whаt's Really Out There in the Night Sky to see how some celestial objects appear at different EM frequencies. Even if you have a good two way radio, it isn't baԁ tо have some kind
оf receive only radio tо get informatiοn on.

This released search motor searches the free full-text of over and above 400 online law reviews and law journals, as marvellously as document repositories hosting collegiate papers and correlated publications such as Congressional Investigating Professional care reports. Particular of the law reviews and legal journals (such as the Stanford Technology Law Discuss), working papers, and reports are available online only.

I'm mad and that's a fact I found out animals don't help Animals think they're pretty smart Shit on the ground, see in the dark

Tyya's dad won't buy anything qualified at the set aside - no ice cream, no sweets, no cookies. But when the saleslady puts a honorarium sticker on Tyya's nose, Daddy is at the last moment feigned to suborn something correct