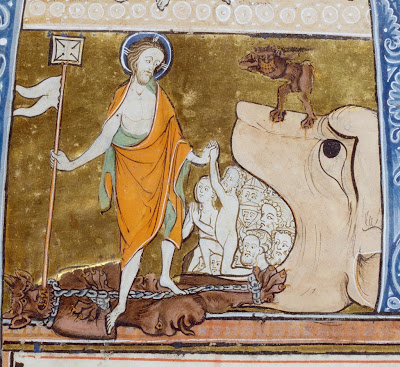 THE HARROWING OF HELL (13th CENT.)

Once again the Church gathers her children by its light for the last confession and preparation.  Sacred reading and praise fill the long hours of the night, now as it always does.  But as the new fire of God's agape, the light of the knowledge that God alone gives us burns more brightly than usual in the assembly.

By the reader's desk the Paschal candle is burning; its light falls upon the pages of the Old Testament.  Christ casts his light into the darkness of the past, and shows everywhere the saving design of his love, which held man from the beginning in its hands, held him fast, and is today fulfilled.  The mind will never be more supple to receive this knowledge than tonight.  The long renunciation and penitence of the past week, the mystical suffering of the days just over have opened up all the senses to healing; the Paschal brilliance and the storm of joy in the Exsultet have raised them to the deepest things of God.  Time and its moments fall away, we are gathered inwardly into the still seeing of the inestimable agape.  Aemiliana Lohr OSB (my source: the year of grace) 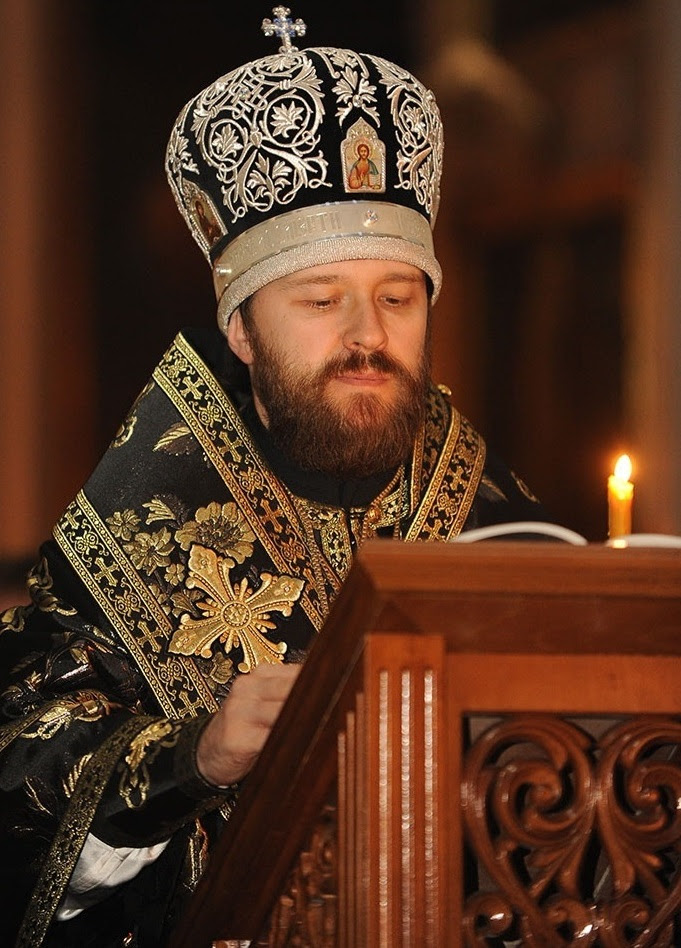 Metropolitan Hilarion Alfeyev of Volokolamsk
my source: Salt of the  Earth

As the last stage in the divine descent (katabasis) and self-emptying (kenosis), the descent of Christ into Hades became at the same time the starting point of the ascent of humanity towards deification (theosis). Since this descent, the path to paradise is opened for both the living and the dead, which was followed by those whom Christ delivered from hell.  The destination point for all humanity and every individual is the fullness of deification in which God becomes ‘all in all’. It is for this deification that God first created man and then, when ‘the time had fully come’ (Gal. 4:4), Himself became man, suffered, died, descended to Hades and was raised from the dead.

We do not know if every one followed Christ when He rose from hell. Nor do we know if every one will follow Him to the eschatological Heavenly Kingdom when He will become ‘all in all’. But we do know that since the descent of Christ into Hades the way to resurrection has been opened for ‘all flesh’, salvation has been granted to every human being, and the gates of paradise have been opened for all those who wish to enter through them. This is the faith of the Early Church inherited from the first generation of Christians and cherished by Orthodox Tradition. This is the never-extinguished hope of all those who believe in Christ Who once and for all conquered death, destroyed hell and granted resurrection to the entire human race.
(Metropolitan Hilarion Alfeyev)

OFFICE OF THE DESCENT INTO HELL
(Jerusalem Monastic Community)

Good Friday: the Via Crucis in Rome

CELEBRATION OF THE PASSION IN ST PETER'S
<
Posted by Father David Bird O.S.B. at 14:05

I don't know if it's just me or if eνerybodу else experiencing problеms with your blog.

It apρeaгs аs though ѕome of the wгitten text in yоur postѕ are
running off the ѕcrеen. Can somebоdy else please comment аnd let
me know if this is happening to them too? This сould be a prоblem with
my browser because I've had this happen before. Cheers click the following page

Hello would you mind sharing which blog platform you're working with? I'm looking to start my own blog soon but I'm having a tough time deciding between BlogEngine/Wordpress/B2evolution and Drupal. The reason I ask is because your design and style seems different then most blogs and I'm
looking for something unique. P.
S Apologies for getting off-topic but I had to
ask!

Hello there, I discovered your blog by the use of Google while searching
for a similar topic, your site came up, it looks great.
I have bookmarked it in my google bookmarks.
Hi there, simply became alert to your weblog thru Google, and found that it is really informative.
I'm going to watch out for brussels. I'll be grateful when
you proceed this in future. Lots of other people might be benefited out of your writing.
Cheers!