Mary Alexopoulou: The Singer Who Became A Nun


The story of Mary Alexopoulou, a successful musician of the 1960's and who today is an abbess named Theonymphi (tr. Bride of God), can be divided into two parts: first as a singer until 43 years of age, and second with the life she lives now among the faithful in her monastery not far from Athens. As a servant of the Lord, she has chosen to serve Him forever. The following are her own words from an interview, followed by videos of her as a singer and as a nun. Life As A Singer

"My father never wanted me to have anything to do with dancing. Nor with singing. Some friends of my grandfather, who were musicians, finally convinced him. They told him: "Why do you prevent Mary? She has such a beautiful voice! Allow her to evolve through song." Eventually one of them, who played in an orchestra in the Village Taverna in Ekali, promised to take me there to sing and bring me home in the evening. My father trusted him and that's how I got started. After my first record, I went and sang at the Festival of Thessaloniki. I sang one song of Mavromoustaki with Cleo Denardou, called the "Feast". There I won, getting first prize. I also began to make a lot of money at night. Then I had little time to go to church, although I had learned to do so from my family. Inside me, however, I had great sorrow. Then I had success with a song by Katsaros at a song festival in Malta, where again we received first prize. It was a time when I heard a lot the song I sang, and everyone in the area knew me. Nonetheless, all my love songs I sang I dedicated to God, trying as much as I could to go to heaven. So much did I love Him." 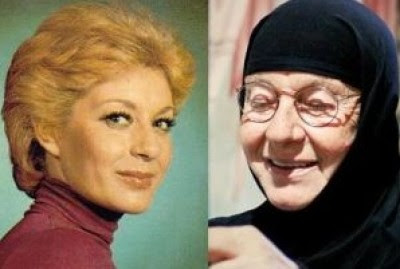 The Death of Her Daughter

"In the meantime I married, I had two children, two daughters, my Constantina and Eleutheria. My husband did not want me working in nightclubs so he prevented me. This was the time when I sang "Bampola" which everyone was singing and playing on the radio. After four years something went amiss with my husbands work and I had to go back out to work. This was painful for me, as I lost my flow. Further, with the money I made from the song, I started making healthy food shops that I wanted to make into a large chain. In 1984 my Constantina was 18 years old, shortly before leaving to study Political Science abroad. One morning she took the car from our house to go to the shop in Kifissia. At the turn of Agia Marina in Koropi she got into an accident with a truck. It was instantaneous. Then I realized that everything was vain. We are nothing. Only dirt." 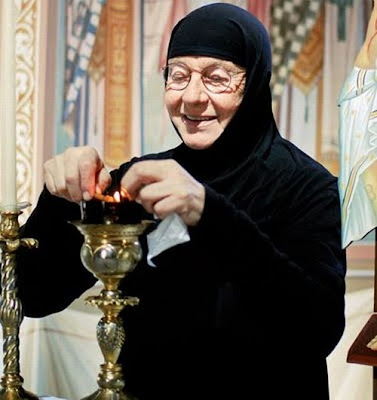 "In 1992 I created my hermitage. People come here from all over the world, Greeks from abroad and Cyprus. Miracles occur with children who have problems. Panagia the Theonymphi is everywhere and guards them. I do not want you to write exactly where the monastery is, because I do not open to anyone, except only on Sundays. Those who wish in their soul to come here and meet me and venerate should be sure, my child, that they will find me. As many nuns live here - novices or not - did so by their will. Half the monastery is avaton [prohSource: Translated by John Sanidopoulosibited to men]."