EXALTATION OF THE HOLY CROSS

The cross is raised and appears above the earth, which until recently malice had kept hidden. It is raised, not to receive glory (for with Christ nailed to it what greater glory could it have?) but to give glory to God who is worshiped on it and proclaimed by it.

It is not surprising that the church rejoices in the cross of Christ and robes herself in festal clothes, revealing her bridal beauty as she honors this day. Nor is it surprising that this great throng of people has gathered to gether today to see the cross exposed aloft and to worship Christ whom they see raised upon it. For the cross is exposed in order to be raised and is raised to be exposed.

What cross? The cross, which is a little while ago was hidden in a place called "The Skull" but now is everywhere adored. This is what we rejoice over today; this is what we celebrate.   This is the purpose of the present feast; this is the manifestation of the mystery.


For this hidden and life-giving cross had to be exposed, set on high like a city on a hill or a lamp on a stand, for all the world to see......


We are celebrating the feast of the cross which drove away darkness and brought in the light. As we keep this feast, we are lifted up with the crucified Christ, leaving behind us earth and sin so that we may gain the things above. So great and outstanding a possession is the cross that he who wins it has won a treasure. Rightly could I call this treasure the fairest of all fair things and the costliest, in fact as well as in name, for on it and through it and for its sake the riches of salvation that had been lost were restored to us.


Therefore, the cross is something wonderfully great and honorable. It is great because through the cross the many noble acts of Christ found their consummation - very many indeed, for both his miracles and his sufferings were fully rewarded with victory. The cross is honourable because it is both the sign of God’s suffering and the trophy of his victory. It stands for his suffering because on it he freely suffered unto death. But it is also his trophy because it was the means by which the devil was wounded and death conquered; the barred gates of hell were smashed, and the cross became the one common salvation of the whole world.


The cross is called Christ’s glory; it is saluted as his his triumph. We recognize it as the cup he longed to drink and the climax of the sufferings he endured for our sake. As to the cross being Christ’s glory, listen to his words: Now is the Son of Man glorified, and in him God is glorified, and God will glorify him at once. And again: Father, glorify me with the glory I had with you before the world came to be. And once more: “Father, glorify your name”. Then a voice came from heaven: “I have glorified it and will glorify it again”. Here he speaks of the glory that would accrue to him through the cross. And if you would understand that the cross is Christ’s triumph, hear what he himself also said: When I am lifted up, then I will draw all men to myself. Now you can see that the cross is Christ’s glory and triumph((St Andrew of Crete)

A Wondrous Vision of the True Cross 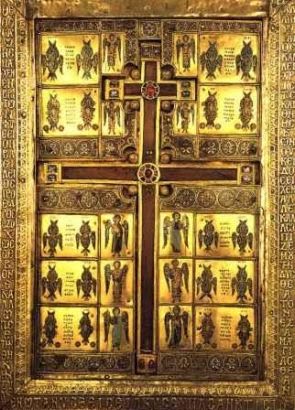 
One time a poor monk named Gennadios came to the Sacred Monastery [of Dionysiou on Mount Athos] from New Skete of Saint Paul to seek charity. He was an old man over seventy years in age. Our abbot, Archimandrite Gabriel, gave him whatever he wanted, even in conversation and in the spiritual life. The old man among others confessed the wondrous vision below, and which testifies to his virtuous and holy life.


On 14 September in 1967, Xeropotamou Monastery celebrates because it has the large Honorable Cross which also has a hole to which the Lord was attached. Because of the feast he also went to celebrate with them and venerate the All-Holy Wood. During the time of veneration at the end of Orthros, the old man came into ecstasy, and saw that flames of fire came out of the Honorable Wood and the entire surrounding area, as if it was on fire. Seeing this in ecstasy he was amazed and said to himself: "How do the brother monks approach and embrace the Honorable Cross and do not burn?" And how would he himself approach and venerate? It seemed to him totally impossible. When it came time for him to venerate he pleaded to the Panagia from the depth of his soul and heart to help him to approach. And, O the wonder!, the flames he saw extinguished and thus with courage and much reverence he approached and venerated.

This is Holy Thursday, but the best rendering of "Nos autem gloriae" that I could find on youtube.    The same feast celebrated by the Armenians This is the Exaltation of the Holy Cross (Orthodox)