HOMILY ON THE FEASTDAY OF THE DEDICATION OF OUR ABBEY CHURCH 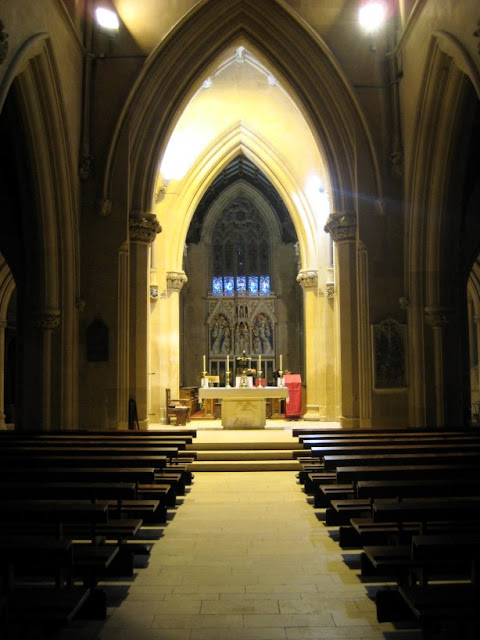 We all know how important Sunday is.   We know that, liturgically, is is to be preferred to most feasts, to all feasts apart from those of Christ and Our Lady.  Is it not a surprising thing that we do not celebrate the Sunday liturgy today, in spite of being a Sunday?    Does it not show a false sense of Christian priorities to inflict on you the celebration of a local feast, almost a domestic feast, when you have come here to celebrate the Sunday liturgy in communion with Catholics all over the world?   True, it was once a cathedral, the first Catholic cathedral since the Reformation to sing the whole Divine Office every day.   True, it is in this church that Gregorian chant was re-introduced into the United Kingdom for the first time since the Protestants had outlawed it.   Many in England believed its opening heralded a new stage in the struggle to return England to the Faith.   In that spirit, Belmont was given a relic of the True Cross that had been given by the Patriarch of Jerusalem to Richard the Lion-Heart, which was kept with the crown jewels, and was given to the Jesuits of Ghent by Queen Henrietta Maria who took it with her when she fled to the continent.   It is now in the chapel of St Benedict.   At the consecration of this church, the Mass was celebrated by Dom Gueranger, founder of Solesmes.     Belmont has been associated with many events in the history of the Catholic Church in England and Wales; but none of this justifies doing away with Sunday Liturgy and replacing it by our own little feast.

However, how can we go on thinking that way if consecration turns a church into the very centre of the universe, the place where heaven and earth join and become one.   \the walls and the altar are consevrated, first with water in the name of the Father, Son and Holy Spirit, and then with chrism, just like the Christian who goes through Baptism and Confirmation; and the altar becomes the holiet place on earth because of what it is put aside to do.   It is the altar that makes a building a church.   Without it, it is at best a prayer house.   It was the altar in Jerusalem that sanctified the gift in the sense that those who offered the sacrifice knew that it was accepted by God (was "sanctified") because it was offered on an altar where God's covenanted Presence was.  For that reason they could offer sacrifice nowhere else.   Because the Samaritans offered sacrifice on a mountain top, there was no guarantee that that their offerings were accepted by God because they were offered outside the covenant.  The Samaritans had a different version of the covenant based on pre-Davidic sources.   Hence the question from the woman at the well.

The Gospel for the Dedication of a church that we are using today is that of the Samaritan woman at the well who asks Jesuswhoare right, the Jews who say that it was necessary to worship in the Jerusalem temple, or the Samaritans who worshipped on the mountain.   Jesus answered that the Jews were right because salvation was with the Jews; but that the time was coming and had already come when they would worship neither on the mountain nor in the temple, but would worship in spirit and in truth.

It must be understood that the Samaritan woman was not talking about worship in general.   All Jews, Samaritans and disciples of Jesus accepted that we can pray anywhere, and that they had to pray with honesty and for the right reasons.   This conversation was about SACRIFICE which, alone, was restricted to Jerusalem by the Jews and to the mountain top by the Samaritans.   Hence,   Our Lord;s reply is highly significant.   The time would come when sacrifice would not be offered on the mountain, nor in the temple, but in spirit and truth.   What sacrifice is offered in spirit and in truth?   It is Christ's very own sacrifice, offered by him once and for all on the Cross and becomes our means of approaching God every time we offer up the Eucharistic Sacrifice.

The Jerusalem altar did not look anything like the altar we use.   It was very high, and to get to the top it was necessary to climb a ramp.  On the top there was a continuous fire burning hwere the sacrifices were consumed.   It did not take long for the Fathers of the Church to see the Holy Spirit as the Christian equivalent of the fire on the altar.   St John Chrysostom draws a parallel between the Elijah's prayer to God asking God to send fire from heaven upon the sacrifices he had doused with water in the presence of the priests of Baal and the prayer of the priest over the bread and wine.   He imagines the sanctuary filled with angels and silence throughout the heavenly host when the Father sends down the Holy Spirit on the bread and wine, transforming them into Christ's body and blood.   In the same tradition, an Orthodox writer has written:

The altar is the holiest place on earth.   The majesty of God descends on the altar when the bloodless Sacrifice of Christ is performed on it. 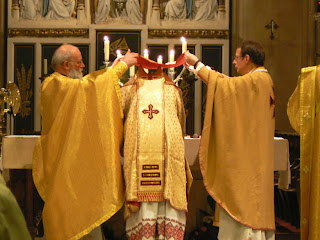 The altar is as holy as the Jordan because the heavens are opened and the Father manifests his Son to us in the power of the Spirit.
It is an altar of sacrifice, representing Calvary on which Christ's body was laid.
It is God's throne or his Mercy Seat upon which Christ's blood is sprinkled for our atonement and from which God in his Mercy showers his Grace on all human kind.
The altar reminds us of Christ's tomb because it is from here that the risen Christ comes to save us.
It is the holy table of the messianic feast upon which we celebrate the Marriage of the Lamb.
It is united to the altar in heaven because on it lies the same Offering for all human kind as lies on the altar in heaven.
It is the place where heaven and earth are joined and where the Parousia or Second Coming is anticipated and savoured.

Is it not a wonderful thing to step back, look around, and realize how privileged, how honoured and how challenged we are to be here and to be able to call it our church?