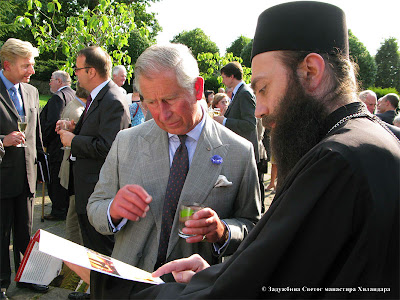 Specifically, on Thursday afternoon, about 100 guests from the United Kingdom, Europe, the U.S. and prominent members of the Serbian Diaspora, gathered to raise money for lab equipment to maintain icons and manuscripts, which are part of the priceless treasures of Hilandari Monastery.

It should be noted that the Head of the Foundation of Hilandari Monastery, Milinots Radic, said the charity event was organized by Prince Charles to support the Monastery.

"We also had two other charity events in London, and the money received was for the rehabilitation of bakery equipment and and library of the Monastery," added Mr. Radic.

Prince Charles regularly visits Mount Athos and Hilandari Monastery, during which he saw up close the size of the destruction caused by the fire on 4 March 2004. 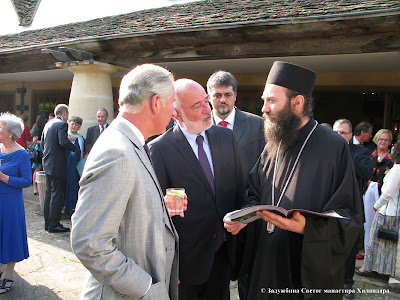 It is true that Prince Charles and his father the Duke of Edinburgh, honorary members of the Friends of Mount Athos in the United Kingdom, contributed actively to Mount Athos and the Monastery (see here, here, and here).

The Abbot of the Monastery, Archimandrite Methodios, in his statement said that the Prince of Wales cares for the course of the reconstruction of the Monastery, but the work has been affected by the economic crisis, as the Serbian and the Greek Government is unable to contribute.

It is worth noting that the abbot of Hilandari, Methodios, met with Prince Charles, where he was briefed on the rehabilitation work and especially for the restoration of the west wing. 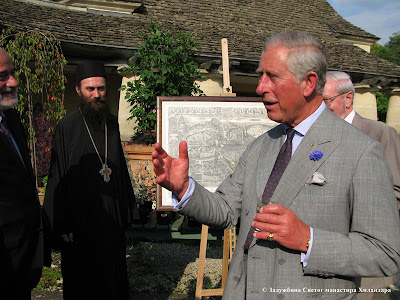 Prince Charles reported on the sustainable development of the Monastery and told the abbot that some money will be invested in vineyards and olive trees, which will contribute to the normal life of the Monastery.

Finally, the abbot of Hilandari during his stay in the United Kingdom visited the Church of St. Sava in London, and the Monastery of St. John the Baptist in Essex.


THIS HAS NOTHING TO DO WITH THE ABOVE: THE TROOPING OF THE COLOUR 2011