THE FEAST OF THE TRANSFIGURATION

(please excuse my choosing thge easiest of options.  I am recuperating from an eye operation)

TRANSFIGUATION: CENTRE OF THE EVANGELICAL NARRATIVE by Fr Thomas Hopko
(for podcast, click above)

:
"The Saviour's Transfiguration", an early-15th century icon from the Tretyakov Gallery, attributed to en:Theophanes the Greek. 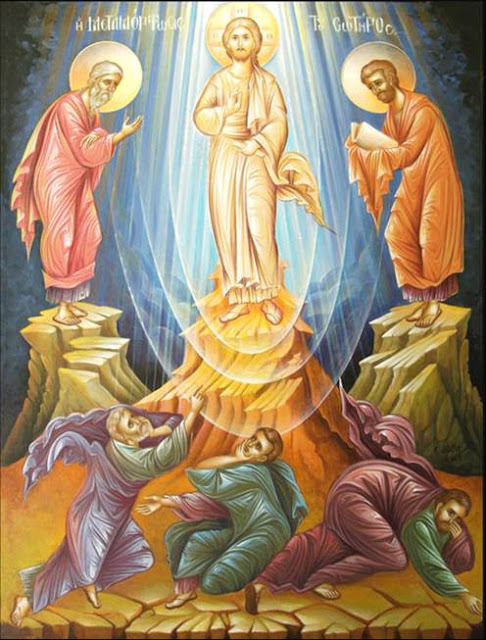 By George Mantzarides
Professor at the School of Theology,
University of Thessaloniki

The Transfiguration of Our Savior has a central place in the Orthodox Church and in Orthodox theology.

It is the event that reveals the glory of the Church and of the faithful. It is a witness to the new reality introduced by the coming of Christ in history.

During His Transfiguration, Christ revealed the Uncreated Glory of His Divinity within His human nature. At the same time, He took up those surrounding Him into His Uncreated Divine Glory. Moses and Elias participated in the same radiance as Christ. The only difference is that Christ is the Source of Divine radiance, whereas the others are recipients thereof.

The reason why Christ was transfigured before His Disciples was that the day of His Crucifixion was approaching: “That when they should see Thee crucified, they might know Thy Passion to be voluntary....”1

By His Transfiguration, Christ, on the one hand, bears witness to His Divinity, which His Disciples had confessed shortly before through the mouth of the Apostle Peter; and, on the other hand, He offers an initial experience of the coming of His Kingdom.

The fact that we celebrate the Transfiguration on August 6 perhaps does not help us to remember its direct relationship with the Cross of Christ. Only when we consider that a few weeks later, on September 14, we celebrate the Universal Exaltation of the Precious Cross — which is reminiscent of Great Friday — do we find its historical connection with the Feast.

And we should not reckon it fortuitous that the Church has instituted another Feast in this place: the Feast of the Theologian of the Light of Mt. Tabor, St. Gregory Palamas. Thus, the Second Sunday of Great Lent, five weeks before Pascha, is dedicated to St. Gregory Palamas.

Moreover, it is significant that in all three Synoptic Gospels the event of the Transfiguration is related immediately after Christ’s declaration that “there be some of them that stand here, which shall not taste of death, till they have seen the Kingdom of God come with power.”2 Hence, as Patristic Tradition also emphasizes, the Transfiguration of Christ comes as a revelation of the Kingdom of God “with power.”

By His Transfiguration, Christ confirms and strengthens faith in His Divinity, which His Disciples had already confessed.

During His Transfiguration, Christ did not assume something that He did not previously possess; rather, He reveals — once again, according to the measure that His Disciples could receive it — the Glory that He always possessed as God-Man. In other words, the Glory that His Disciples saw on Mt. Tabor was not some transitory phenomenon, but rather the eternal Light of the Divine Nature of Christ. One of the hymnographers of our Church declares this when he says: “Thou wast transfigured on the mountain, O Christ our God, showing to Thy Disciples Thy Glory as each one could bear it.”3

The Light of the Transfiguration is the Uncreated Light of the Kingdom of God, which came into the world with the coming of Christ. Of course, the Kingdom of God, being without beginning or end, is not limited by time; rather, it transcends and transforms time. It does not begin at the end of history, but rather already exists within and above it, and it will continue to exist beyond history.

In reality, that is, the coming of the Kingdom of God “with power” is nothing other than its revelation “with power.” This is not the arrival of something that did not previously exist; instead, that which existed and will always exist is revealed.

Just as the Uncreated Light, which was revealed during the Transfiguration to the Disciples, existed from before the ages and abides eternally in the Theanthropic Hypostasis of Christ, so also the Kingdom of God, which came into the world with Christ, is sometimes revealed to the faithful as a precursor of the Age to Come.

The Christian Faith is not based on some moral principle or ideology; rather, it is founded on the revelation of the Kingdom of God in Christ within history. The testimony of the Apostle Peter, in which he makes precise reference to his experience of the Transfiguration in order to proclaim the truth of the Christian message, is striking: “For we have not followed cunningly devised fables, when we made known unto you the power and coming of our Lord Jesus Christ, but were eyewitnesses of His majesty.”4

Without experience of the Heavenly, man is not freed from earthly temptations. The Apostles of Christ, Martyrs, Saints, and ascetics of the Church would not have been able to gain victory over the world and to offer everything to Christ had they not had some taste of Heavenly bliss.

One obtains adoption in Christ in the present life. “Now are we the children of God,” writes the Apostle John the Evangelist, “and it doth not yet appear what we shall be: but we know that, when He shall appear, we shall be like Him; for we shall see Him as He is.”5

Man acquires a sense of adoption in Christ in his life by keeping the Divine commandments. By self-abnegation and offering oneself to God and to the Will of God — which constitutes a form of death — the believer becomes a participant of the Divine Life and Kingdom.

The taste of eternity does not begin after the Cross, but rather with the Cross. Obedience to the Will of God “unto death” already constitutes participation in the resurrection. Just as the Glory of Christ begins with the Cross, which crushes the powers of the Evil One, so also the glory of Christians begins with voluntary acceptance of death for Christ, Who crushes the old man and reveals the new.

The Transfiguration of Christ is preparation for the Cross. And the Cross of Christ is the commencement of His Glory as man. By His Transfiguration, Christ does not acquire anything new; rather, He strengthens His Disciples in view of His Crucifixion. His Disciples are in need of this strengthening, in order to face the Cross of their Teacher, as well as their own cross, later, for the Name of their Teacher.

The above is an excellent lecture; but, at one point, I must part company with it.   It is devilishly difficult to translate one lot of ideas, formed in one cultural context, and to insert it into a set of ideas formed in another tradition.  The speaker finds it difficult to see the western doctrine of created grace within an Orthodox context.  He  is speaking of what we mean by created grace when he says that only Peter, James and John could see Jesus transfigured because their sight, soul, personality etc, need to be purified in order to see what they saw.   Who or what purified them?   The Presence of the Holy Spirit.   Why is this purification, elevation or transformation called "grace"?   Because it is brought about by the uncreated activity of the Holy Spirit, not by the efforts of the person, who, however, must collaborate with the Spirit.   Why, in the Western tradition, is it called "created"?    Because it is the created person and his faculties that are being transformed by the Holy Spirit:   Uncreated grace is the effect on the human being of the Holy Spirit,s active presence.   It is NOT some created substance that mediates between God and the human being, or has an independent reality distinct from God's uncreated presence and the human being who is being changed by that presence..  It is the Holy Spirit (uncreated Grace) who makes possible our sharing in the divine, trinitarian Life: it is our human lives that benefit from created grace because it is they who are sharing.   The notion of "created grace" is more about whether the active presence of the Holy Spirit makes a real difference to human beings, as Catholics believe, or whether it changes our relationship with God externally without really transforming US, as some Protestants believe.  When you go from an Augustinian context to that of the Eastern Fathers, the very questions can subtly change their meaning or significance.

Having said that, I acknowledge that there are real differences between the theology of East and West; and I prefer the Eastern approach because, with its emphasis on the central role of the divinized flesh of the Jesus Christ, it is more in keeping with the eucharistic nature of both the Church and of the Christian life.
Posted by Father David Bird O.S.B. at 22:50

http://www.provokator.org/polls/you-take-public-bus-30min-free-seats-spiked-hair-hiphopper-granny-roma-girl-bus-driver-where-d http://www.astronomylive.com/content/eye-safety-during-solar-eclipse
buy facebook likes buy facebook likes 1000 facebook likes
i m not able to open and surf microsoft and microsoft related websites...... like www.microsoft.com support.mmicrosoft.com download.microsoft.com and etc... but apart from "microsoft & microsoft related website",im able to open and surf all other websites..including antivirus websits.... on the advice given by other people in forums regarding "can't open microsoft website " as said by them i did complete virus scan with avg8 and 9 (updated definations) and complete malware,spyware and adware scan with super antispyware(updated definations) and spydoctor(updated definations) but no go and facing the same problem so i did complete system restore--->NO GO so i did fresh OS installisation-----NO GO and i facing the same problem can't open microsoft website in opera /IE 7&8/firefox please helpme regard and thanks in advance HAPPY NEW YEAR TO ALL... vichu

fatherdavidbirdosb.blogspot.com is this what i need, thanks