THE ASSUMPTION AT BELMONT

iI have always contended thatngood liturgy does not depend on whether it is Tridentine or post-conciliar, but on its basic orientation. If the emphasis is on those who celebrate it, on birettas, lace and incense in the old rite or on togetherness and modernity in the new, then the celebration will be distorted and an obstacle to participation. If, on the other hand, the primary focus is on the Presence of God and our unworthy sharing in the liturgy of heaven, then that Presence wil shine through, and we will be transformed by the liturgical action. Below is liturgical celebration according to the Novus Ordo; and it is as good and as fitting for its purpose as anything we celebrated before the Council. 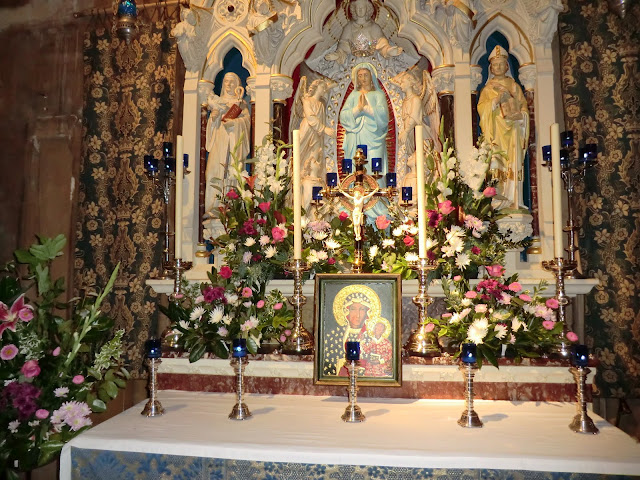 It is fitting that the Virgin should share in every aspect of her Son’s providential care for us. Just as she bestowed her flesh and blood on him and had received a share of his graces in return, so in like manner she also participated in all his pain and sufferings. When his side was wounded by the lance as he hung on the cross a sword pierced his Mother’s heart, as saintly Simeon had foretold. And so, after our Saviour’s death, she was the first to conform herself to the Son who resembled her, and hence she shared in his resurrection before all others.

When her Son had broken the tyranny of death by rising from the grave, the Virgin saw him and heard his salutation; and when the time came for him to depart for heaven, she escorted him on his way, as far as she could. Finally, when he had gone away, she took his place among the apostles, uniting herself with the other companions of our Saviour by means of her good works, through which she benefitted the whole human race. She more truly than anyone else made up what was lacking in Christ; for who could more fittingly do so than his Mother?

Now it was necessary for her most holy soul to be separated from her hallowed body; and it was indeed released and united with the soul of her Son, the second light with the first. For a short time her body remained upon earth and then it too departed. It had to go everywhere the Saviour had gone, and to shed its light on both the living and the dead. It had to sanctify nature in every respect; then, at last, it could take its appointed place. And so the grave received it for a short time, but heaven soon took from the grave that new earth, that spiritual body, that treasury of our life, more revered than the angels, holier than the archangels. His throne was restored to the King, paradise to the tree of life, the sun’s orb to the light, the tree to its fruit, the Mother to her Son; for in every respect she was in accord with her Child.

O blessed one, what words can adequately praise your virtue, or the graces you received from our Saviour for the benefit of the whole human race? It would be impossible to do so even if one could speak in the tongues of humans and of angels, to use the words of Paul. It seems to me that part of the eternal happiness in store for the righteous will be really to know and proclaim your graces in a fitting way. For these no eye has seen nor ear heard. To use the noble John’s words: The world cannot contain them. The only theatre in which your marvellous gifts can fittingly be displayed is the new heaven and the new earth where the sun is the Sun of Righteousness whom darkness neither precedes nor follows. The Saviour himself will proclaim your worth, and the angels will applaud.

Mass of the Assumption BVM. 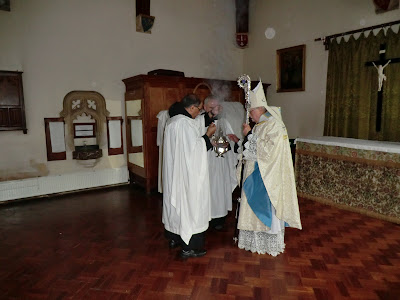 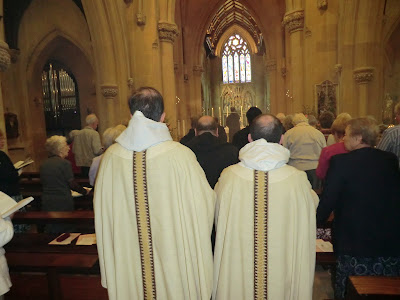 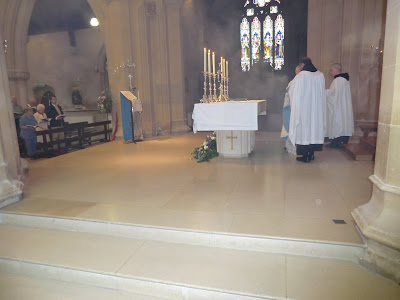 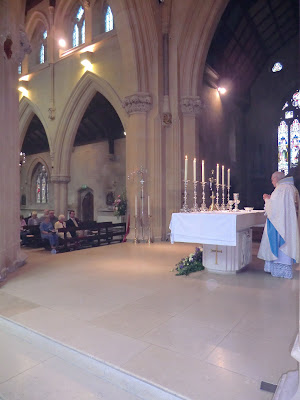 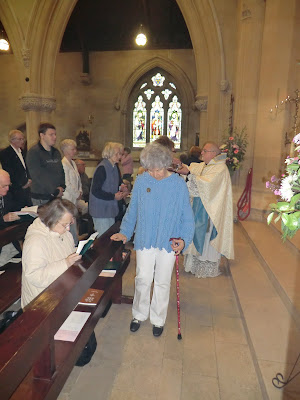 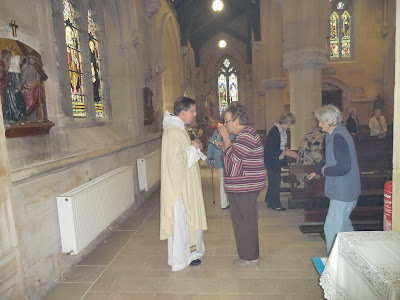 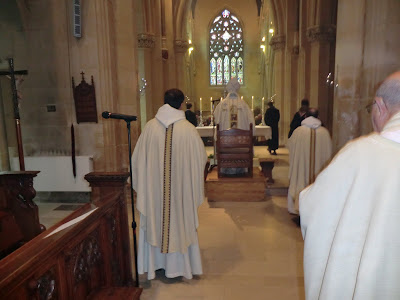 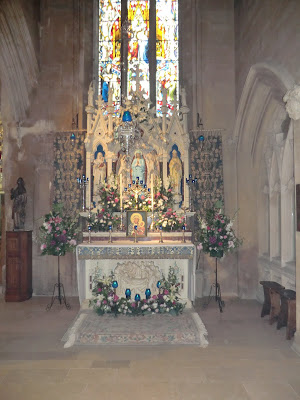 Homily on the Assumption of Our Lady 2011 by Abbot Paul

Travelling around Europe, it is surprising how many churches are dedicated to the Assumption of Our Lady or the Koimesis of the Panagia, the Falling Asleep, Dormition of the All-Holy One, the Theotokos, she who gave birth to God. I wonder how many churches in medieval England kept this day as their patronal festival.

All this seems a world away from the horrific scenes we witnessed in Britain this past week. This is not the moment to reflect on those tragic events and their causes, but we fervently commend our country and all its citizens to the intercession of Our Lady. It was at the Council of Ephesus in 431 that the Church officially adopted that marvellous title, Theotokos, to tell us not so much who Mary is but who Jesus Christ is, true God and true Man, in response to the Nestorian heresy. Wasn’t that the apex of feminist theology, giving a masculine title to Our Lady?

Unfortunately Nestorianism is still alive and well today, not in its traditional heartland, though I suppose Islam is form of Nestorianism, but in those who deny the essential unity of the person of Christ, the Incarnation of the Word made flesh. If the title Theotokos, attributed to Mary, was the touchstone of orthodoxy regarding the person of Jesus, it soon became the title par excellence by which she is loved and known by all who faithfully follow her Son. “With great delight I sat in his shadow. His intention towards me was love”, says the Song of Songs. St Paul tells us that the Church is the mystical Body of Christ and that, as Christians, we are his members who together make up that Body. The Body of Christ that was conceived by the Holy Spirit in Mary’s womb and born of a Virgin Mother was but one Christ, whole and undivided, two distinct natures but one person. That Body was broken for our salvation on the altar of the Cross and its unity restored in the glory of the Resurrection.

Christ’s Body broken and crucified is an eloquent symbol of the divided Church, East and West, Orthodox, Catholic and Protestant. The united Church will be an Easter Church, fully reflecting the life of her Risen Lord, and will bring about a New Pentecost, but in a divided Church Christ remains nailed to the Cross, imprisoned in the tomb, the power of the Resurrection weakened, its beauty marred. How sad that Mary, the Mother of God, who said to the angel, “Behold, the handmaid of the Lord. Be it done unto me according to thy word,” and to the steward at the wedding feast of Cana, “Do whatever he tells you,” that she who is the very model of Christian obedience and humility, she who leads us to Christ, should have become a symbol of division among Christians in the West. How sad that she, who at the foot of the Cross heard Jesus say, “Woman, behold thy son,” and who was united with the disciples in prayer as they awaited the coming of the Holy Spirit, should have become a cause of division among Catholics and Protestants. Our Lady, who conceived and gave birth to our Lord Jesus Christ, “God from God, light from light, true God from true God, begotten, not made, consubstantial with the Father: through whom all things were made,”

In the Revelation of Divine Love, Julian of Norwich tells us of a conversation she had with Jesus: “Do you want to see her?” he said. “I know quite well you want to see my blessed Mother, for, after myself, she is the greatest joy I can show you, and most like me and worthy of me. Of all my creation, she is the most desirable sight.” It was as though he were saying, “Do you want to see how I love her, so that you can rejoice with me in my love of her, and hers for me?” Here our Lord God is speaking to all who are going to be saved. He is saying, “Can you see in her how greatly you are loved? For love of you made her so exalted, so noble, so worthy.” When Jesus said, “Do you want to see her?” I thought it was the nicest word that he could possibly have said, together with the spiritual revelation that he gave me of her. Her he showed me three times. The first occasion was when she was big with child, the second sorrowing under the cross, and the third as she is now, delightful, glorious and rejoicing. Mary is the perfect image of saved humanity, loved by God the Father, sharing fully in the destiny of her Son, united in glory with him through the power of the Holy Spirit, who is the transfiguring and sanctifying love of God.

May she intercede for us today, that we too may share in the victory of her Son over sin and death and come one day, so filled with the Holy Spirit, in body and soul to sit at God’s right hand, simply to enjoy for ever, delightful, glorious and rejoicing, the peace and beauty of his presence. Amen.
VESPERS 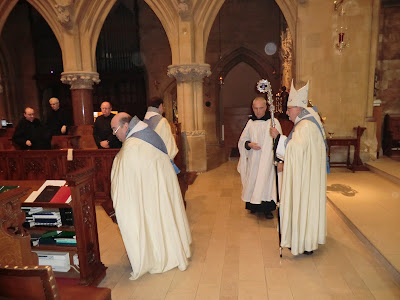 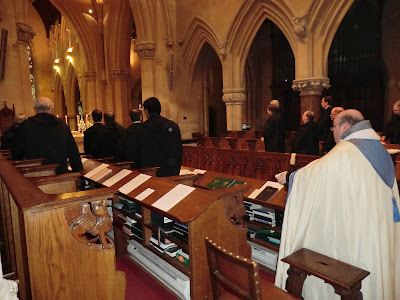 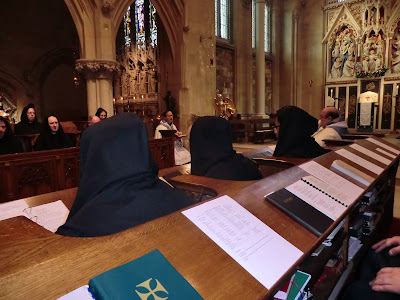 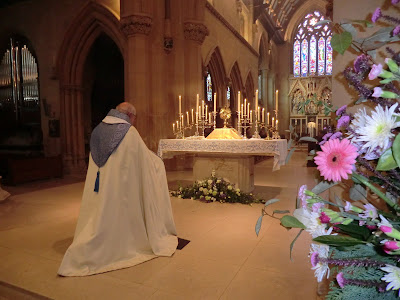 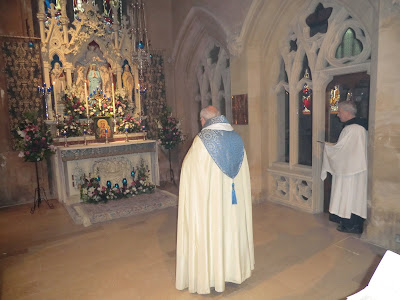 Maybe you will want to place a facebook icon to your site. I just marked down the article, however I must make this manually. Just my advice.