Why Do We Need Faith? | Joseph Ratzinger | From What It Means to Be a Christian. 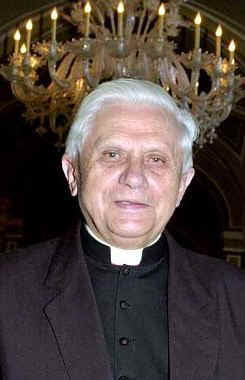 
Editor's note: In the original Preface to What It Means to Be a Christian, written in Münster on Easter 1965, Joseph Ratzinger wrote the following:
This little book presents in written form three sermons that the author preached in the Cathedral at Münster to a congregation from the Catholic Student Chaplaincy, December 13-15, 1964. The response to my efforts once again to raise the question of what being Christian means for us in today's world and to answer that question, in the spoken words of these sermons, has encouraged me to publish them. I have consciously avoided going beyond the linguistic and material limitations inherent in the whole of this on account of its origin; with just a few alterations, it bears the form it took at the given moment. It is my hope that what I have said, in a form that makes no literary claims, may help in its own way toward that renewal of faith and proclamation which we so much need in a world that has fundamentally changed.
Here is the chapter titled, "Why Do We Need Faith?"


Being a Christian means having love. That is unbelievably difficult and, at the same time, incredibly simple. Yet however difficult it may be in many respects, discovering this is still a profoundly liberating experience. You will probably say, however: Well and good, that is what Jesus' message is about, and that is very fine and comforting. But what have you theologians and priests made of it, what has the Church made of it? If love is enough, why do we have your dogma? Why do we have faith, which is forever competing with science? Is it not really true, then, what liberal scholars have said, that Christianity has been corrupted by the fact that, instead of talking with Christ about God the Father and being like brothers to each other, people have constructed a doctrine of Christ; by the fact that people, instead of leading others to mutual service, have invented an intolerant dogma; by the fact that instead of urging people to love, they have demanded belief and made being a Christian depend on a confession of faith?


There is no doubt that there is something terribly serious in this question, and like all really weighty questions, it cannot be dealt with just like that, with a well-turned phrase. At the same time, however, we cannot miss the fact that it also involves a simplification. To see this clearly, we need only realistically apply our reflections so far to our own lives. Being a Christian means having love; it means achieving the Copernican revolution in our existence, by which we cease to make ourselves the center of the universe, with everyone else revolving around us.


If we look at ourselves honestly and seriously, then there is not just something liberating in this marvelously simple message. There is also something most disturbing. For who among us can say he has never passed by anyone who was hungry or thirsty or who needed us in any way? Who among us can say that he truly, in all simplicity, carries out the service of being kind to others? Who among us would not have to admit that even in the acts of kindness he practices toward others, there is still an element of selfishness, something of self-satisfaction and looking back at ourselves? Who among us would not have to admit that he is more or less living in the pre-Copernican illusion and looking at other people, seeing them as real, only in their relationship to our own selves? Thus, the sublime and liberating message of love, as being the sole and sufficient content of Christianity, can also become something very demanding.


It is at this point that faith begins. For what faith basically means is just that this shortfall that we all have in our love is made up by the surplus of Jesus Christ's love, acting on our behalf. He simply tells us that God himself has poured out among us a superabundance of his love and has thus made good in advance all our deficiency. Ultimately, faith means nothing other than admitting that we have this kind of shortfall; it means opening our hand and accepting a gift. In its simplest and innermost form, faith is nothing but reaching that point in love at which we recognize that we, too, need to be given something. Faith is thus that stage in love which really distinguishes it as love; it consists in overcoming the complacency and self-satisfaction of the person who says, "I have done everything, I don't need any further help." It is only in "faith" like this that selfishness, the real opposite of love, comes to an end. To that extent, faith is already present in and with true loving; it simply represents that impulse in love which leads to its finding its true self: the openness of someone who does not insist on his own capabilities, but is aware of receiving something as a gift and of standing in need of it.


This faith is of course susceptible to many and varied developments and interpretations. We need only to become aware that the gesture of opening our hand, of being able to receive in all simplicity, through which love first attains its inner purity, is grasping at nothing unless there is someone who can fill our hands with the grace of forgiveness. And thus once again everything would have to end in idle waste, in meaninglessness, if the answer to this, namely, Christ, did not exist. Thus, true loving necessarily passes into the gesture of faith, and in that gesture lies a demand for the mystery of Christ, a reaching out toward it--and that mystery, when it unfolds, is a necessary development of that basic gesture; to reject it would be to reject both faith and love.


And yet, conversely, however true this may be--and however much christological and ecclesiastical faith is for that reason absolutely necessary--at the same time, it remains true that everything we encounter in dogma is, ultimately, just interpretation: interpretation of the one truly|  sufficient and decisive fundamental reality of the love between God and men. And it remains true, consequently, that those people who are truly loving, who are as such also believers, may be called Christians.

• Seeing Jesus in the Gospel of John | Joseph Cardinal Ratzinger | From On The Way to Jesus Christ
• Are Truth, Faith, and Tolerance Compatible? | Joseph Cardinal Ratzinger | From Truth and Tolerance: Christian Belief and World Religions.
• On Reading the Pope | Fr. James V. Schall, S.J.
• Reincarnation: The Answer of Faith | Christoph Schonborn
• Exploring the Catholic Faith! | An Interview with Diane Eriksen
• The Source of Certitude | Thomas Dubay, S.M. | Epilogue to Faith and Certitude
• The Crisis of Faith | Father John Hardon, S.J.
• Understanding The Hierarchy of Truths | Douglas Bushman, S.T.L.


Joseph Ratzinger, now Pope Benedict XVI, was for over two decades the Prefect for the Congregation of the Doctrine of the Faith under Pope John Paul II. He is a renowned theologian and author of numerous books. A mini-bio and full listing of his books published by Ignatius Press are available on his IgnatiusInsight.com Author Page.
Posted by Father David Bird O.S.B. at 13:32