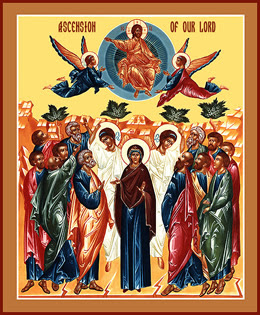 "You ascended into glory, O Christ our God, and You delighted the disciples with the promise of the Holy Spirit. Through this blessing, they were assured that You are the Son of God, the Redeemer of the World."
—Troparion for the Liturgy of St. John Chrysostom, Feast of the Ascension of our Lord Jesus Christ

"Christ's Ascension is therefore not a spectacle for the disciples but an event into which they themselves are included. It is a sursum corda, a movement toward the above into which we are all called. It tells us that man can live toward the above, that he is capable of attaining heights. More: the altitude that alone is suited to the dimensions of being human is the altitude of God himself. Man can live at this height, and only from this height do we properly understand him. The image of man has been raised up, but we have the freedom to tear it down or to let ourselves be raised."
— Joseph Cardinal Ratzinger, from Images of Hope: Meditations On Major Feasts (Ignatius Press, 2006)

With these simple, matter-of-fact words, Luke describes the Ascension of Jesus, expressed even more concisely in the Creed: "He ascended into heaven." This event is so important for Luke that the Acts of the Apostles opens with a description of the same event. As the disciples looked on, Luke records, Jesus "was lifted up, and a cloud took him from their sight" (Acts 1:9). Mark's account, heard today, is equally direct and succinct: "So then the Lord Jesus, after he spoke to them, was taken up into heaven and took his seat at the right hand of God" (Mk. 16:19).

This dramatic moment has been celebrated in the Church on the fortieth day after Easter since the earliest centuries. Some of the Church Fathers, including Augustine, said that the feast had been observed since the time of the apostles, although the earliest evidence of its celebration dates to the fifth century. In the Latin Rite in the United States the Feast of the Ascension is one of six solemnities, the others being the solemnities of Mary, Mother of God (January 1); the Assumption of the Blessed Virgin Mary (August 15); All Saints (November 1), the Immaculate Conception (December 8), and the Nativity of Our Lord Jesus Christ (December 25).

Despite being a solemnity and a holy day of obligation, the Feast of the Ascension is sometimes completely overlooked or not given much attention. Ask Catholics what is the significance of the Feast and answers aren't always immediate. The rather mysterious nature of the Feast is heightened in some ecclesiastical provinces by its transference from the sixth Thursday of Easter to the following Sunday. [1] In a way, the Solemnity bears a resemblance to the sacrament of Confirmation, the exact meaning of which is not always understood well and suffers for not being more clearly explained and comprehended.

This occasional murkiness is unfortunate because the Ascension is such a joyful event in the work and life of Jesus Christ, as well as being a vital reality in the ongoing life and mission of the Church. To appreciate this joy and vitality we should keep in mind what the Catechism of the Catholic Church states about the liturgical calendar: The Church, "in the course of the year, . . . unfolds the whole mystery of Christ from his Incarnation and Nativity through his Ascension, to Pentecost and the expectation of the blessed hope of the coming of the Lord" (CCC, 1194).

Hinted at here are revealing parallels between the Incarnation and the Ascension and between the Nativity and Pentecost. In the Incarnation the eternal Son of God took on human nature in order to save mankind. By the power of the Holy Spirit, divinity and humanity were united in one Person; the Word became flesh (Jn 1:14) and lowered Himself to the level of dust and death. The Nativity is the physical, outward revelation of this reality: the Christ Child is born and history and the world are never the same.

At the Ascension the crucified, risen Son of God returns to His Father. Having descended to dusty earth, He now returns to heavenly glory. Having conquered death, He ascends to eternal life. But He returns to the right hand of the Father not just as the Word, but as the Incarnate Word. The doors of heaven are now open and humanity can now approach the throne room of God, the way having been paved by the life, death, and resurrection of the God-man. Pentecost, finally, is the manifestation of the God-man's Church, which is both human and divine. The Church was revealed to the world on that day—fifty days after Easter—by the power of the Holy Spirit.

All of this theology is nice enough, but what does it mean for us? It means the Feast of the Ascension is a celebration of salvation won. The Catholic Encyclopedia notes that "in the Eastern Church this feast was known as analepsis, the taking up, and also as the episozomene, the salvation, denoting that by ascending into His glory Christ completed the work of our redemption." The tendency is often to think of the Resurrection as the culmination of Jesus' salvific work, but it is the Ascension that places the final stamp of approval on the sacrificial and victorious work of our Savior. This is beautifully expressed in the first chapter of Paul's epistle to the Ephesians:

May the eyes of your hearts be enlightened, that you may know what is the hope that belongs to his call, what are the riches of glory in his inheritance among the holy ones, and what is the surpassing greatness of his power for us who believe, in accord with the exercise of his great might: which he worked in Christ, raising him from the dead and seating him at his right hand in the heavens ... (Eph. 1:17-20).

Now that the Incarnate Son of God has ascended into heaven and sits in the throne room of God, mankind can follow. United to the Son through baptism and deepening communion with Him through reception of the Holy Eucharist and the other sacraments, the hope of heaven is ours.

"The ascension of Christ is our elevation," declared Leo the Great in a sermon on the Ascension, "Hope for the body is also invited where the glory of the Head preceded us. Let us exult, dearly beloved, with worthy joy and be glad with a holy thanksgiving. Today we not only are established as possessors of paradise, but we have even penetrated the heights of the heavens in Christ." Where the sin of the first Adam closed the gates of Paradise, the righteousness of the new Adam has opened them wide.

Jesus promised His disciples that He would prepare a place for them (Jn. 14). Because of the Ascension, we know He has prepared a place for those who are His. Because of the Ascension, we have the hope of His return and of our future passage into glory. "The Ascension, then," Pope John Paul II explained in May 2000, "is a Trinitarian epiphany which indicates the goal to which personal and universal history is hastening. Even if our mortal body dissolves into the dust of the earth, our whole redeemed self is directed on high to God, following Christ as our guide."

Our Guide has come, died, rose from the dead, and ascended into heaven. Let us celebrate the Feast!

[1] One question that often arises about the Feast of the Ascension is why do some provinces celebrate the solemnity on the following Sunday and not on the sixth Thursday of Easter? The short answer is that the bishops of those regions believe that it makes sense pastorally to do so.

The website for the United States Council of Catholic Bishops has a page explaining some of the situation based on the norms of the Code of Canon Law. It notes that Sunday and the six solemnities referred to above are holy days of obligation. It then quotes Canon 1246¤2: "However, the conference of bishops can abolish certain holy days of obligation or transfer them to a Sunday with prior approval of the Apostolic See." Further on, the page has the following explanation:

"In accord with the provisions of canon 1246¤2 of the Code of Canon Law . . . the National Conference of Catholic Bishops of the United States decrees that the Ecclesiastical Provinces of the United States may transfer the Solemnity of the Ascension of Our Lord and Savior Jesus Christ from Thursday of the Sixth Week of Easter to the Seventh Sunday of Easter according to the following procedure.

A reason often given for moving the day of the Feast from Thursday to Sunday is that many more Catholics (who are usually working on weekdays) can attend the holy day of obligation. It has also been suggested that this will allow priests, liturgists, and musicians to devote more time to prepare for the Feast of the Ascension.

(This article was originally published in 2004 in Our Sunday Visitor in a slightly different form.)