THE ANGLICAN ORDINARIATES AND THE REFORM OF THE REFORM

As someone totally in favour of the "new mass", I agree with the writers of the blog "The New Liturgical Movement" that the process of integrating "old" and "new" is still taking place, and that everyone  must take part, so that the Latin Rite can have a liturgy worthy of the very best.  Councils have never been instant solutions to the Church's problems and have always taken a long time to be digested by the Church at large to become new expressions of the constant, Spirit-filled Catholic Tradition - the 2nd Council of Nicaea  on icons has yet to be totally accepted by the West - so that it is not surprising that the post-Vatican II revision of the Latin Liturgy has yet to reach maturity.    Hence, from a rather different standpoint than that of Shawn Tribe, I welcome this article.

The Anglican Ordinariate and the Reform of the Reform

How and to what extent the Anglican Ordinariate will become manifest in the life of the Church is a question which will only be able to be answered with the passage of some time. However, it strikes me that the Ordinariate, with its corresponding intent to retain certain aspects of the Anglican liturgical patrimony, brings with it some interesting potentialities; potentialities not simply for the Ordinariate itself but also for the reform of the reform -- most particularly within English-speaking regions.

What I am suggesting is that I believe the potential exists for it to contribute to the broader conversation going on within the Church about the sacred liturgy, particularly in the light of certain, oft-discussed points of Sacrosanctum Concilium. To be clear, it is not that I believe these potentialities and aspects are absent from the conversation without the Ordinariate, but rather that the Ordinariate, bringing with it its own lived experience, history and "culture", brings another and additional dimension to the conversation; a dimension that, importantly, will be a lived one and will be able to be referred to and consulted equally by Catholics within and without the Ordinariate.

Let us then briefly consider some of these aspects. 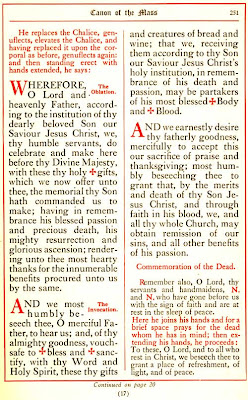 Within the context of the English-translation of the Roman rite, it is no secret that our experience with the vernacular has been rather lack-lustre at best and banal at worst. Further compounding this problem is that fact that, despite the clear directives of the Second Vatican Council, Latin has been virtually supplanted within parish liturgical life. Accordingly, many rightly and laudably pursue the recovery of the use of Latin within Latin rite worship (and should most certainly continue to do so). That said, there can also be a rejection, avoidance orlaissez-faire disposition which can be taken by some of those interested in continuity and re-enchantment toward the vernacular question, and this seems to be conditioned by these aforementioned accidents of post-conciliar history and a reaction to them. While understandable, this is not terribly desireable since it is reasonable to suppose that vernacular is not going away at this point. As such, the question must be thoroughly addressed, and indeed, it has been addressed in part by virtue of the recent re-translation of the English edition of the Roman Missal. There are some other aspects to consider however.

This aspect is not only worth pursuing and preserving as part of the Ordinariate, but here the Anglican Ordinariate can bring something to the table for broader liturgical consideration within the Roman rite. Indeed, I think it is no exaggeration to say that it can be a tangible, living witness as to how to approach and pursue vernacular liturgical forms in a way which is eminently liturgical and sacral.

In addition to these purely textual considerations, another dimension of this is certainly the English polyphony and chant found within the Anglican tradition. From the vernacular compositions of the renaissance, to modern composers such as Healey Willan or the "Englished" Gregorian style chant of the like of the Anglican gradual -- not to mention Anglican chant proper -- these present examples of both the richness of this musical patrimony and also the potentialities that can exist for vernacular forms of liturgical music generally. Indeed, I believe this better approximates what the Second Vatican Council had in mind when it considered developments in the area of liturgical music. It certainly stands above much of the vernacular liturgical composition that has more typically accompanied the Roman rite since the time of the Council; composition which has been characterized more by stylistic rupture than by organic development. The foray into vernacular liturgical music that has been experienced within the context of the post-conciliar Latin Church has, of course, been stylistically shaped by imbalanced notions of participatio actuosa on the one hand (which is its own issue; a broader issue), but also by the general zeitgiest of the time from whence these compositions come; times marked by a greater spirit rupturism, by a certain anti-formality and folksiness, as well as a certain secularity and even anti-sacrality. By contrast, the vernacular musical patrimony of Anglicanism has had the benefit of arising in other times and other climates and thus its own vernacular liturgical compositions came out quite differently, having the benefit of these different climates and influences. Indeed, these English forms of chant and polyphony, by comparison, are noteworthy for their continuity and sacrality. This historical and cultural difference presents the reform of the reform with options today. The example and experience of such by the its use within the Ordinariate, and, by extension, its consideration as part of the broader reform of the reform, should certainly present an important alternative and inspiration which can serve the broader cause of the re-enchantment of the sacred liturgy.

Aside from the vernacular question however, certainly the Anglican tradition has not excluded traditional Latin liturgical compositions within their worship, and I would suspect the Ordinarate would not either, thus testifying to the continuing appropriateness of this even where a robust vernacular tradition exists -- and this too is an important point and witness, for too often things today are treated in an "all or nothing" manner.

We have frequently promoted -- just as the Second Vatican Council promoted -- the celebration of the Divine Office within the parish -- particularly in its sung form. Pass many an Anglican church and you will likely see denoted the times and days for "Evensong" and Matins. Certainly this is an aspect of the Anglican patrimony, and should it find expression within the context of the Anglican Ordinariate, it could help to heighten an awareness of this aspect of liturgical life generally, which might in turn (we can hope) influence such practices within parishes of the Roman rite -- though within the context of the Roman Divine Office of course. 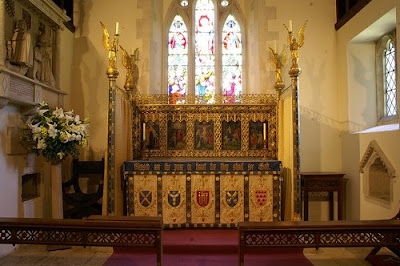 Finally, mention must surely be given to the matter of liturgical architecture and ornaments.

Anglicanism was influenced in the 19th and 20th century by the Ecclesiologists, the ritualists, the Oxford Movement and the gothic revival. During this time the mediaeval Catholic order was gradually rediscovered and restored to the point that this has now become the most recognizable form of the Anglican sanctuary today. As part of this revival, various examples exist of excellent altars, altar frontals and other altar appointments, rood screens, vestments and so forth. How then might this relate to the broader reform of the reform? Insofar as the liturgical arts are certainly a part of this movement as well, and insofar as these arts relate to important aspects of the church and the liturgy such as the altar and sanctuary. But how is it unique to the Ordinariate? I suppose the answer is that it isn't per se unique since these elements all have Catholic roots, but it rather has to do with frequency of expression such that it forms a recognizable, iconic part of that patrimony. (For example, I would point to the more frequent use of antependia on altars, or, secondarily, to the greater likelihood of running into a rood screen or rood loft.)

There is surely a contribution to be made here as well.

This has admittedly been a very cursory and quick treatment, however I am hopeful that it might give at least some sense of the possible contributions that might be made by the Anglican Ordinariate toward the reform of the reform. Whether this will happen will depend on a variety of factors of course, not the least of which whether those of us outside the Ordinariate make a concerted effort to embrace, engage and include them as part of this broader liturgical conversation.   It is my hope that this will happen, for we will have thereby added an additional, and I believe important voice in the cause or re-enchanting the sacred liturgy.
Posted by Father David Bird O.S.B. at 10:38