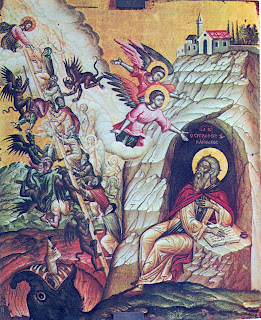 By Sergei V. Bulgakov
In the Church services for the fourth Sunday the Holy Church offers us a great example of the life of fasting in the person of the Venerable John of the Ladder, who, "having overcome the flesh through fasting" and "by the sweat of his ascetic efforts quenched the fiery arrows of the enemy" and "renewed the strength of souls " and, "ascending to the height of virtues", "received in his soul the divine wealth of the Spirit, undefiled prayer, chastity, modesty, continuous vigil", "was deified through heavenly glory", "was revealed as a physician to those sick through sin" and was the author of The Ladder of Paradise. According to the expression of the Holy Church, how the profoundly granted ascetic life of the Venerable John "gives us a pleasure sweeter than honey", and so his Ladder "brings to us the ever flowering fruits of his teaching, pleasing the heart with vigilant heeding: for souls are rising up the ladder from earth to heaven and abiding in glory". Approving fasting with the example of the Venerable John, the Holy Church offers us a new consolation in the Gospel and Epistle readings of this Sunday. In the first she shows that fasting and prayer defeats the very spiritual enemy of the salvation of man, and predicted this victory in the circumstances of suffering, the death and the resurrection of Christ; and in the second she reminds us of the inalterability of God's will for the salvation of man, in order that we have a firm hope.
Besides the hymns praising the Venerable John, during the fourth week other hymns are chanted, in which the repentant soul resembles the man, who fell into the hands of the thieves, and whom both the priest and the Levite passed by, not offering help. Testing one's conscience the Holy Church inspires the soul to turn to the Lord with prayer: He cleans off the sinful scabs.
Having concentrated in the hymns of the fourth Sunday on the diverse motives for the zealous bearing of the lenten spiritual struggle, the Holy Church at the end of the Matins service with a tender voice appeals to her children: "Come, let us work in the mystical vineyard, making fruits of repentance work in it, let us not labor for food and drink, but through prayer and fasting let us gain virtue. And the Lord of the vineyard, pleased by our labor, will provide the denarii by which He delivers souls from the debt of sins, for He alone is rich in mercy". 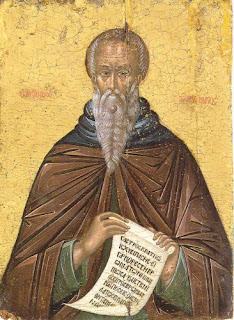 Apolytikion in Plagal of the Fourth Tone
With the rivers of your tears, you have made the barren desert fertile. Through sighs of sorrow from deep within you, your labors have borne fruit a hundredfold. By your miracles you have become a light, shining upon the world. O John, our Holy Father, pray to Christ our God, to save our souls.
Kontakion in First Tone
As ever-blooming fruits, you offer the teachings of your God-given book, O wise John, most blessed, while sweetening the hearts of all them that heed it with vigilance; for it is a ladder from the earth unto Heaven that confers glory on the souls that ascend it and honor you faithfully.
Source