The Clothing of a Novice and Other News 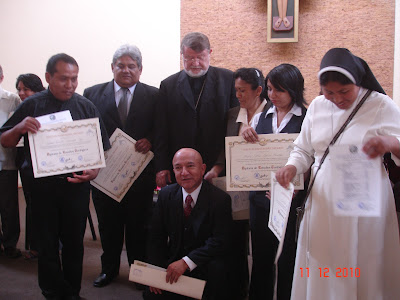 The Peruvian Church has the English Church beaten hands down in pastoral innovation and initiative. In England people seem to watch the decline in numbers, the lack of vocations to the diocesan priesthood, the bad publicity from the BBC and some newspapers in which they cannot mention "catholic priest" without mentioning "sex abuse" - and this against all statistical evidence - with a fatalism and acceptance as though nothing can be done. A prevailing mood of the Church seems to be conservative and liberal at the same time: conservative in that there is resistence to change, and liberal because there seems to be an inability to look at the problems theologically, and that any change that is made is done in the name of efficiency. For example, if there is a small community of Catholics right out in the country in which its members support one another and pray together and are always pleased to have a priest for Mass, then Christ is present in that place through the local community; and that is more important than the numbers involved. If that is the case, why close the chapel in the name of efficiency? Efficiency won't get us to heaven!! This has happened in places where there is a religious community that can supply a priest without difficulty.

In contrast, in Peru, pastoral initiatives are going on all the time. One such has taken place in the small diocese of Chosica on the outskirts of Lima where the German bishop Norbert Strottman attached a theological institute for learning at a distance. This enables enclosed monks and nuns to study for a diploma, as well as interested lay people. The course is intense and efficiently directed by a team of academics. On Saturday, 11th December, Bros Percy and Wilmer completed a two year course and were presented with a diploma at the Chosica seminary. Above is Br Wilmer with Bishop Strottmann and other members of the course. 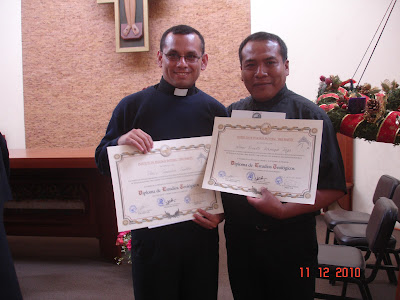 Bros Percy and Wilmer with their diplomas.

THE CLOTHING OF BRO. JOSE LUIS: 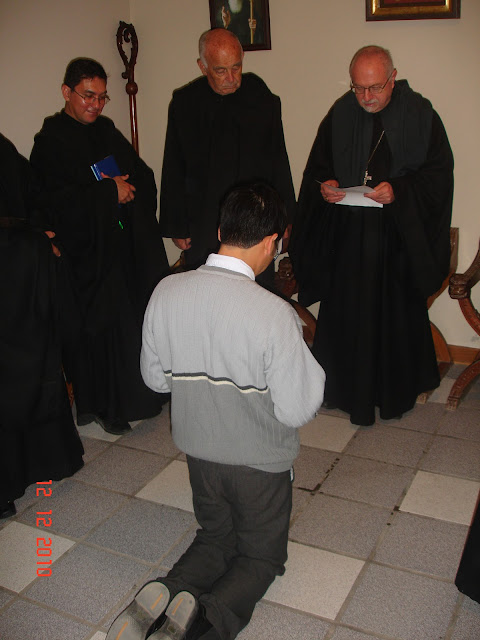 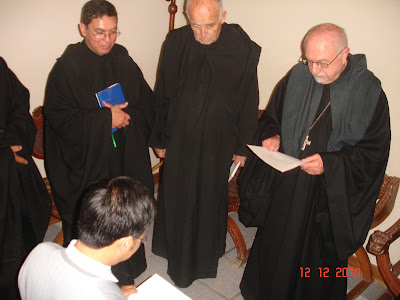 On Sunday, the feast of Our Lady of Guadalupe, after Matins which finished at 6.00am, we went to the small chapter room for the clothing of Bro. Jose Luis.   Abbot Paul arranged it to coincide with his visit.   The ceremony began withe the reading of the chapter of the Rule of St Benedict which deals the reception of novices; after which Fr Paul gave a commentary.

He said that it is clear from the Rule that St Benedict thought it adequate for someone who wishes to enter to have a noviciate of one year.  It is also clear from the text that he considered a year as a long time.   In contrast, the monks of this monastery have several months as an aspirant, a whole year as a postulant, two years as a novice, and then three to four years in temporary vows.   Life was shorter then; society was more stable, and the people were, perhaps, more mature.   Nevertheless, there is a danger in prolonging the time of preparation so much: people can postpone their final commitment till later and then simply fail to make it.   The shorter time of preparation did focus the mind on this very basic commitment.   Commitment is always made in the present.   The past is over and fixed; the future is unreal.   Until the time of final vows, every day must be a day of utmost dedication to seeking God accirding to the Rule, each day rooted in the steadfast love of God which is answered by a complete "Yes" from us, according to the circumstances in which Providence has placed us. 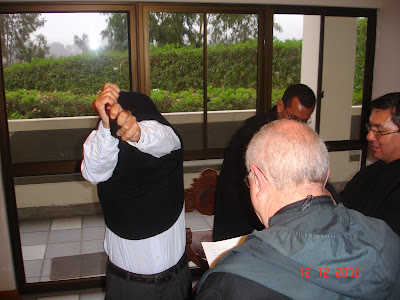 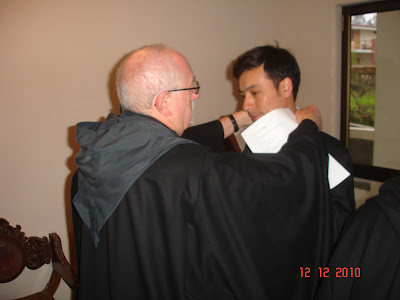 Having given his commentary, the abbot formally questioned Bro. Jose Luis as to what he wanted, and he answered that he wanted the monastic habit as a monk of this monastery.   Then, while the community sang the "Veni Creator Spiritus" in Latin, Abbot Paul clothed Bro. Jose Luis.   Afterwards, the abbot formally handed over to the new novice a copy of the Rule under which he would serve.  Then everybody embraced him and wished him well and congratulated him in turn.   Any of you want to become monks?   It is worth the effort. 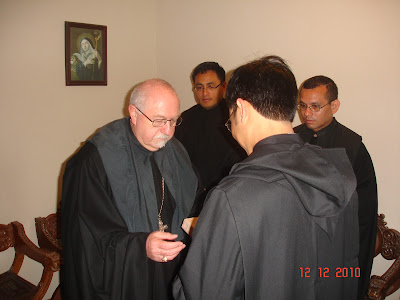 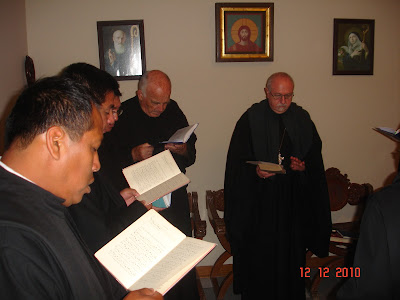 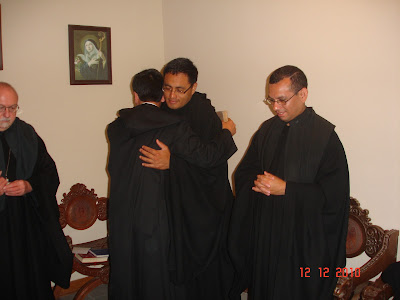 At the moment we have two enclosed Poor Clares, Franciscan nuns, who will soon be celebrating their twenty five years in vows.   They asked and received permission to have a ten day retreat in our monastery after hearing it praised by lay people who have been here.    For one,it was the very first time she has been out of the enclosure since she joined.   On Sunday it was her birthday and the feast of Our Lady of Guadalupe, her patron saint; so one of the monks baked a cake, and she blew out the candle and we sang "Happy birthday to you" in Spanish, and she said she would remember this day for the rest of her life; and we had a good time until the bell rang for Compline. 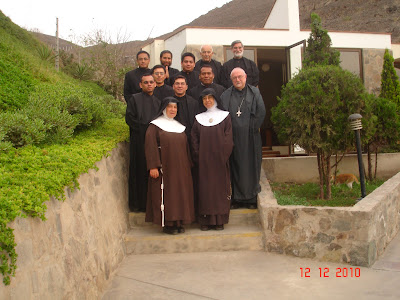 All together, it was a most enjoyable weekend.

Just to show you what happens next here is a video of the simple profession (to stay in the monastery for three  years) in the Abbey of St John, Minnesota.   In our monastery, this would be at the end of two years in the noviciate:


At the end of the temporary vows, monks take vows for life.  These videos come from Norcia where St Benedict was born, and where there is now an American community that has been asked by the Holy See to celebrate the liturgy according to the extraordinary rites

The Golden Mass of  Ember Wednesday of Advent.


During the Middle Ages, the Mass of the Missus Est -- the first words of the Gospel of the Annunciation -- on the Ember Wednesday of Advent was celebrated very solemnly as a kind of festival of the Blessed Virgin Mary. The stational church in Rome is the Basilica of Saint Mary Major; this choice signifies that today’s Mass is equal to that of the greatest feasts of the Mother God. It was called the Missa Aurea, the “Golden Mass.” In manuscripts of the Middle Ages, the capital letters of the text of the Annunciation Gospel were written in gold. The letters of gold were but a sign of the secret grace hidden within the words of the Angel Gabriel and within the response of the Virgin Mary.

Hi Everybody! I'm from London but am living in Berlin at the moment.
Gotta love this site!