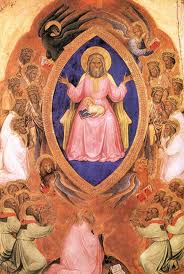 The Introit for "Gaudete Sunday" sung by the monks of Beuron Abbey in Germany.  What follows is what is probably a more technically correct version of the same Introit, but I cannot imagine a choir singing it.
And here is a more Christmas -like "Gaudete" sung by the "Mediaeval Baebes".   The first word "Gaudete" remains the same!!  I think it is rather special.
"Gaudete"

And here is "Gaudete" sung by Libera:


Now for something completely different, though still on the subject of music.  Beuron is a great abbey with a distinguished history.  The Mediaeval Babes and Libera are excellent choirs.  Here is what Metropolitan Hilarion, Director of the Moscow Patriarchate's Office for External Affairs has to say about Bach.   An Orthodox theologian, perhaps S. Bulgakov, said that beauty is the manifestation of the presence of the Holy Spirit in nature.  This is the old classical Christian view of beauty and the idea upon which was built the theology of the icon, the idea that an image, when blessed by the Church, manifests the Christian Mystery.  Implicit in what he says is the idea that people can be raised above the limitations of the sect to which they belong by the Holy Spirit and can become Catholic (or Orthodox) in spirit, even while remaining members of their sect.   John Henry Newman did so while still an Anglican.  I believe John Wesley did so.  Taize certainly did so.  Most wonderful of all, Bach and Handel did so in their music.  This is what Metropolitan Hilarion has said:


Metropolitan Hilarion believes Bach is one of the most Orthodox composers

"I think that Bach was more Orthodox composer than many Orthodox composers, but it's my private opinion," he said at a press conference on the Christmas Spiritual Music Festival that will take place in the Moscow International House of Music in January.

Metropolitan Hilarion said that composed by him Cherubim Song is transcribed Bach's first counterpoint from The Art of Fugue. Now this composition is chanted in some churches and, according to the Metropolitan, "corresponds to prayerful spirit of Orthodox Divine service."

According to President of the House of Music and the festival artistic director Vladimir Spivakov, Bach himself believed that he had nothing to do with composing as "everything was dictated to him from above."

The maestro said that he played every concert to bring comfort to people "so that people took something special from the concert," "to take them out of this every day, difficult, sometimes very tragic life, out of this oppression."

"I feel my every concert is a mission (it is too big, pathetic word)...Certainly, it's not a mission, but for me it is an instruction," Spivakov confessed to journalists.

The world known conductor says he loves silence as "we know that the Lord often says His words in silence."

The Christmas Spiritual Music Festival will take place from January 9 to January 23. First time in Russia choirs from Serbia and Armenia will perform during the festival and audience will have a chance to listen to compositions by almost forgotten in Russia composer Nikolay Golovanov - conductor of the Soviet Union radio and laureate of three Stalin prizes, who composed spiritual music for thirty years after revolution though he understood he could never hear it played publicly.