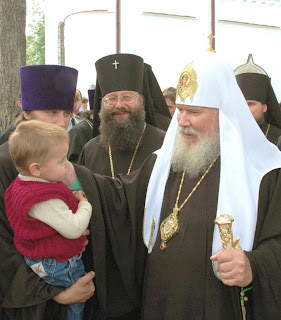 Interview With Orthodox Monk on Old and New Challenges

ROME, NOV. 5, 2009 (Zenit.org).- Having survived Soviet Communism, Russian Orthodox monasticism now faces the new threat of secularization as it passes through a period of testing that only time can heal.

Father Petr Mescerinov expressed these ideas as he discussed with ZENIT the new and enduring challenges of Russian monasticism. The hegumen (a title similar to abbot) of the St. Daniil Monastery of Moscow was in Italy for a conference on Eastern and Western monasticism.

Father Mescerinov is vice-director of the Center for the Spiritual Formation of Children and Adolescents of the Moscow Patriarchate.

ZENIT: How important is contemplation and action in Eastern monasticism?

Father Mescerinov: I can speak of Russian monasticism. Already from ancient times, by tradition, we have two different monastic ways connected to two Russian saints: St. Nil of Sora and St. Joseph of Volokolamsk. They were contemporaries and argued vehemently, even among themselves.

Those were very profound diatribes, rather complex disputes, and I could summarize thus, briefly, the currents that the two saints advocated: Nil of Sora defended the contemplative dimension, whereas Joseph of Volokolamsk defended the active dimension.

It cannot be said that these two aspects are in contradiction to one another, because in regard to the contemplative dimension, we see its influence also in Russian cultural life, in literature, in the rediscovery of the Church Fathers. On the other hand, if we take St. Joseph Volokolamsk's more active current, more involved with the social [realm], we can observe that with his action he did not intend to replace the state, but remained firm in his adherence to his own contemplative roots.

To conclude, we can say that there is no real contradiction between the two dimensions.

ZENIT: Who are the martyrs of Russian monasticism? How many are there?

Father Mescerinov: In regard to Russian monasticism, we can speak above all of the new martyrs of the 20th century. Many have been canonized and many others are yet to be canonized, but the massive closure of monasteries in the Soviet age attests that the monks gave their life to defend the monastic ideal.

ZENIT: In face of the rapid and uncontrolled race of modernity, how are Russian monastic communities reacting?

Father Mescerinov: The monastic communities are reacting in two different ways. To answer this question it is necessary to keep in mind that the Russian monastic tradition was violently interrupted during the Soviet period, and because of this, Russian monasticism today is in fact looking for an answer to this question.

For the time being, no answer has been found, so there are two variants: either a radical separation and self-exclusion from the world, which is not the healthy "leaving the world," which was understood in the past when thinking of monasticism, but a maniacal way to protect oneself from the aggression of the world. [And] the second variant is linked to secularization, declaring oneself exteriorly to be a monk, but in reality one is inserted in the course of the secular life of everyone.

This moment of testing has not yet found an answer in the life of the Church. In my personal opinion, I think the community must certainly protect itself from certain phenomena of the modern world, but this protection must happen in a sober, appropriate, healthy and ecclesial way, and not in an asocial way.

ZENIT: What is the reality of these communities today?

Father Mescerinov: The principal tragedy of our ecclesial life today is the absolute lack of community. There are communities that are born in contrast to the position of the Church in a general sense; however, there are no communities as such as a norm of community life.

This is linked no doubt to the Soviet legacy, because in that period every aggregation was regarded with suspicion and in danger of being repressed; in fact, an anti-solidary instinct has been created in the very conscience of many generations of persons.

Because of this, Russians today do not have a predisposition to community life, and this is also reflected in monastic life. We do not have true communities and our own monastic communities; we have formally organized monasteries, there are some monks, some individuals alone with a straight and sincere vocation, but they are not able to insert themselves well in the community.

This is no doubt a task for the future, or perhaps our ecclesial and social life has arrived at a point of no return in which it is practically impossible to return to genuine solidarity. But the future will show this.