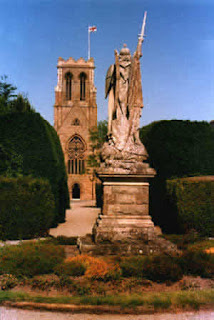 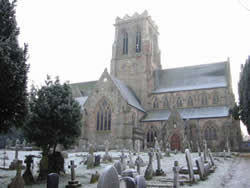 On 21st November the Belmont Community began a year’s celebration to mark the 150th anniversary of its founding. Various events are being planned so that all connected with the Abbey, monks, oblates, parishioners, clergy, religious and friends, can take part. Some will be simple and homely, like the inaugural Mass last week, while others will be grand occasions with large numbers of guests.

Belmont has a fascinating and unusual history. It was the brainchild of Francis Richard Wegg-Prosser of Belmont House, Clehonger, Herefordshire, who, to mark his conversion to the Catholic Church, decided to build a church. For this he engaged the services of Edward Pugin, but they were unable to build all that was planned. Only about a third of the project was completed.  On 21st November 1859 the first stage was officially opened and given to the English Benedictine Congregation. The church was blessed by the first Cathedral Prior, Dom Norbert Sweeney, and, on the following day, the first Mass was offered by Bishop Thomas Joseph Brown of Newport and Menevia, whose cathedral it now became. Later that day a Solemn High Mass was celebrated by Bishop Bernard Ullathorne.

Belmont was unique in that it was a cathedral priory, just like the great medieval Benedictine houses at Canterbury, Rochester, Durham, Worcester and so on. It became the mother church of a fledgling diocese as well as a monastic church where the divine office was sung each day in full by Benedictine monks from Downside, Ampleforth and Douai. They formed the cathedral chapter and prepared both Benedictine and diocesan candidates for the priesthood. It also served as common novitiate and house of studies. An aspect of Belmont’s importance lies in the fact that countless Benedictine priests were trained here, priests who were to serve all over England and Wales in a period of consolidation and growth. Many parishes owe their origin to the English Benedictine Mission. The training they were given was of a very high standard, as was the monastic formation they received. Among the professors was Dom Cuthbert Hedley, successor to Bishop Brown.

Belmont was pivotal to the movement for monastic reform that was gathering momentum in the second half of the 19th Century. It is interesting to note that Abbot Prosper Guéranger of Solesmes preached at the dedication of the church on 4th September 1860. Belmont was instrumental to the reintroduction of Gregorian Chant to Britain and for 60 years was the only cathedral in the world where the Chant was sung every day at Mass and Divine Office. Also of note is the fact that many “Belmont men”, such as Dom Bede Vaughan, took an important role in the Church’s mission to Australia.

A new chapter in the life of the community began with independence, first as a Priory in 1915, then as an Abbey in 1920. Dom Aelred Kindersley, last of the Cathedral Priors, was elected first Abbot of Belmont. The community grew quickly, but was desperately poor, for although Belmont was a foundation of the English Congregation as a whole, it was never endowed or provided with a means of self support. Individual monks were loaned to the other houses to serve on their incorporated parishes. It was not until 1926 that a small school was opened, the founder not wishing Belmont to have a school, but to dedicate itself to the evangelization of Wales and Herefordshire. The first incorporated parishes were taken on in 1934. In addition to training its own men, Belmont also trained priests for the Archdiocese of Cardiff. Archbishop Michael McGrath continued the tradition of ordinations at Belmont well into the 1940s. There have always been and continue to be close relations between Belmont and the Archdiocese.

Eventually the school at Belmont grew to around three hundred and there were two prep schools. They were well known for their high academic standards and for their sporting, artistic, musical and theatrical endeavours. Sadly economic difficulties led to their closure, but Belmont continues to be involved in education through its parish schools and through the successful education programme whereby schools from the West Midlands and Wales visit the abbey as part of their curriculum.

One of our monks, Dom Aelred Cousins, helped found the Monastery of Christ the King at Tororo in Uganda, today a flourishing community. In 1981 Belmont made a foundation in Peru, originally near Tambogrande in the north and now at Pachacamac just south of Lima. The Monastery of the Incarnation continues to grow in spite of the many hardships and difficulties inherent in any monastic foundation. There are strong links between Belmont and Peru, where an extraordinary amount of pastoral, educational and social work has been undertaken and supported.

Today the Community numbers about 45. There is an extensive retreat programme and excellent guest facilities at Hedley Lodge. Belmont has pastoral care of fourteen parishes and several chaplaincies. God continues to bless us with vocations. There are seven young monks in formation at Belmont and six in Peru. Recently, with the help of a grant from the Heritage Lottery Fund, we completed important repair work to the abbey church as well as building new facilities. We are also undertaking, with the help of benefactors, the renovation and improvement of the great organ in memory of Abbot Alan Rees. The Community invites you to join with us in giving thanks to God for his many blessings to Belmont over the past 150 years. May we continue to be faithful to his call and ever ready to do his will.

Email ThisBlogThis!Share to TwitterShare to FacebookShare to Pinterest
Labels: this article in the Catholic Herald was written by the Abbot of Belmont

I needed to thank you for this very good read!
! I absolutely loved every bit of it. I've got you book marked to look at new stuff you post…

Spot on with this write-up, I seriously believe this web site
needs a lot more attention. I'll probably be returning to see more, thanks for the info!

If you wish for to get a good deal from this paragraph then
you have to apply such methods to your won blog.

Ahaa, its good conversation concerning this paragraph at this place at this webpage, I have
read all that, so now me also commenting here.

Hey There. I discovered your blog the usage of msn. That
is a really neatly written article. I will be sure to bookmark it and come back to learn more of your useful information.

Thank you for the post. I will definitely return.

Feel free to surf to my blog ... Comorbid Drug Abuse And Psychological Sickness

I will right away clutch your rss feed as I can not in finding your e-mail subscription link or newsletter service.
Do you have any? Please let me understand so that I could subscribe.
Thanks.

Take a look at my web page - westmichiganparanormalassociation.org

fantastic points altogether, you simply received a logo new reader.
What may you recommend in regards to your post that you just made some days ago?
Any positive?

Today, I went to the beach with my children. I found a sea shell and gave it to my
4 year old daughter and said "You can hear the ocean if you put this to your ear." She placed the shell to her ear and screamed.
There was a hermit crab inside and it pinched her ear. She never wants to go back!
LoL I know this is totally off topic but I had to tell someone!