A PERSEVERANCE CONFERENCE GIVEN BY ABBOT PAUL 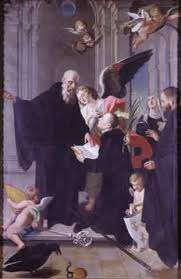 St Benedict gives the Rule to his disciples

Dear Br. David: time stops for no one, least of all in a monastery, and we have come to your First Perseverance, which means that you are approximately a quarter of the way through your novitiate. As you know, it’s really a two-year novitiate, in which we take our first vows at the end of the first year, as in the Rule of St Benedict, though, in his day and up until 1913, that was it. Vows were vows and there were no temporary or simple vows as we have now. That year of novitiate in the Rule led to a definitive decision, which was probably a very good thing, as it focussed the young monk’s mind on a life’s commitment, with no putting off or agonising over whether to take vows or not. Think of what Jesus says in Luke 9:62 “No man, having put his hand to the plough and looking back, is fit for the kingdom of God.” So I hope, Br. David, that, although this is but your First Perseverance, your heart and mind are firmly set on putting your hand to the plough and not looking back.

Each day at Chapter we read a section from the Holy Rule. As you listen to it being read, you must, no doubt, think at times, “What has all this to do with me? I’m only a novice.” Well, it has got a lot to do with you. For example, those chapters about the abbot or the prior or the cellarer all have something for each one of us, of how we should behave towards our brethren and relate to them in a Christian and monastic way. Remember, too, that one day you might be the bursar or the prior or the abbot of this monastery. They certainly make for easier reading and reflection when you’re not personally involved at that level in the life of the Community. The extraordinary value of the Holy Rule is that every thought, every idea, has something to tell us and something to teach us in the way we should be living the life and growing in faith and holiness. A good exercise, and you can use the lectio divina method for this, is to take a chapter like the second one on the Qualities of the Abbot and read it as though St Benedict had written it especially for you today, just as you are, a novice who’s making his First Perseverance. Respond to it in prayer, of course, but put that prayer into action as well, otherwise it would be a sterile prayer, wouldn’t it?

Just think of such phrases as: “The abbot should avoid all favouritism in the monastery. He is not to love one more than another unless he finds someone better in good actions and obedience.” Is your life free from favouritism? What does obedience now mean for you? “The abbot must always remember what he is and what he is called.” Replace the word abbot with novice and see what happens. “The abbot must accommodate and adapt himself to each monk’s character and intelligence.” Now, are you able to do that? Could you do better? And what about your character and intelligence? Are you transforming them by God’s grace to be more easily acceptable to the brethren and at their service? “Above all, he must not show too great a concern for the fleeting and temporal things of this world, neglecting or treating lightly the welfare of his brethren.” I know these are early days and that you’re just getting to know the Community and feel at home in it, but are you preparing yourself or allowing God to prepare you to make the ultimate sacrifice for the love of these men who together make up the Belmont Community?

The Holy Rule is a wonderfully encouraging document, so I hope that you, too, are finding your vocation strengthened and nourished by studying and praying over it every day. St Benedict tells us that he wants the Rule to be read frequently in community, so that we never forget why it is that God called us to the monastery. You might be surprised that I emphasise community and community life rather than prayer, or work, or indeed the spiritual basis of it all, humility, patience and obedience. The truth is that you don’t have to be a monk to pray, or to be a contemplative, or even to be a mystic. And you don’t have to be a monk to work; in fact, you’d be better off not being a monk if you wanted to work in order to earn a decent salary. Much of the work we do is unremunerated and even those who are parish priests or chaplains are only paid a pittance for their services: hence, to some extent, our historic and current economic plight. But let’s leave that for another day! St Benedict is quite clear about the kind of monks we are. At the beginning of Chapter 1 he writes: “First, there are the cenobites, that is to say, those who belong to a monastery, where they serve under a rule and an abbot.” The rest of the Rule explains in detail what a cenobite is and how he should live.

Now a Benedictine community, like Belmont, is not a haphazard group of men, who for convenience’ sake or by chance just happen to live together in a sort of loose and free arrangement, where everyone does what he wants and follows his own desires, even in the intimate things of the spirit. No, though, at times, it might look like that. No one is his own boss. No one does what he wants. Yes, of course there is an element of freedom. We are not slaves or servants, but brothers and friends. There is a careful balance, however, between freedom and communion. There are times when things can go wrong and a brother goes off at a tangent and does his own thing, even builds his own empire, but like the half-forgotten kingdoms of Europe we are reading about in the refectory, these soon wither and fade and disappear. Dust and ashes escape no one! We have been called, each one of us, personally by God to become part of this specific community of brothers, which we call officially and correctly the Monastery of St Michael and All Angels at Belmont.

Br. David, you are not here because you decided you had a Benedictine vocation. You are not here because you wanted to become a monk of Belmont. You are not here for any other reason than that God called you, like he called Abraham, Moses or Elijah. And he called you not to do any work in particular other than, with the help of your brethren, to grow in holiness by entering into communion with the Holy Trinity together with us, the monks who are your brothers in Christ. Now the last but one chapter of the Rule ends with a very telling phrase. “Let them, i.e. the monks, prefer nothing whatever to Christ, and may he bring us all together to everlasting life.”

This is not a life of individuals making an individual effort to get to heaven. No, this is a community of monks living the cenobitic life and helping each other to get there together. We are here for each other. Each one of us, you included, is God’s chosen instrument who will enable the others to enter into eternal life with God through the Paschal mystery of Christ and the gift of the Holy Spirit. May the good Lord grant you the grace of perseverance. Amen