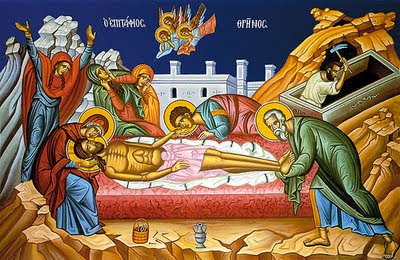 New Evidence on the Shroud of Turin

The Blood and Water from His Side
by St John Chrysostom
source: The Crossroads Initiative

"The Blood and Water from His Side" by St. John Chrysostom Early Church Father and Doctor of the Church.


If we wish to understand the power of Christ’s blood, we should go back to the ancient account of its prefiguration in Egypt. “Sacrifice a lamb without blemish”, commanded Moses, “and sprinkle its blood on your doors”. If we were to ask him what he meant, and how the blood of an irrational beast could possibly save men endowed with reason, his answer would be that the saving power lies not in the blood itself, but in the fact that it is a sign of the Lord’s blood.

If you desire further proof of the power of this blood, remember where it came from, how it ran down from the cross, flowing from the Master’s side. The gospel records that when Christ was dead, but still hung on the cross, a soldier came and pierced his side with a lance and immediately there poured out water and blood. Now the water was a symbol of baptism and the blood, of the holy eucharist. The soldier pierced the Lord’s side, he breached the wall of the sacred temple, and I have found the treasure and made it my own.

So also with the lamb: the Jews sacrificed the victim and I have been saved by it. “There flowed from his side water and blood”. Beloved, do not pass over this mystery without thought; it has yet another hidden meaning, which I will explain to you. I said that water and blood symbolized baptism and the holy eucharist. From these two sacraments the Church is born: from baptism, “the cleansing water that gives rebirth and renewal through the Holy Spirit”, and from the holy eucharist. Since the symbols of baptism and the Eucharist flowed from his side, it was from his side that Christ fashioned the Church, as he had fashioned Eve from the side of Adam Moses gives a hint of this when he tells the story of the first man and makes him exclaim: “Bone from my bones and flesh from my flesh!” As God then took a rib from Adam’s side to fashion a woman, so Christ has given us blood and water from his side to fashion the Church.

God took the rib when Adam was in a deep sleep, and in the same way Christ gave us the blood and the water after his own death. Do you understand, then, how Christ has united his bride to himself and what food he gives us all to eat? By one and the same food we are both brought into being and nourished. As a woman nourishes her child with her own blood and milk, so does Christ unceasingly nourish with his own blood those to whom he himself has given life.''

THE DIRGE OF THE PANAGIA

source: Mystagogy
"The Dirge of the Panagia" is a long narrative funeral song which narrates the Passion of Christ as it was lived by the Virgin Mary and the Myrrhbearing women. One could find hundreds of variations throughout Greece, Cyprus, Asia Minor and southern Italy. According to the the Swiss Hellenist professor of the University of Geneva, Bertrand Bouvier, in his book Le Mirologue de la Vierge (Geneva 1976), there are two hundred and fifty six variants. In fact, there may be over a thousand, since each village has its own unique version, and in certain Greek islands like Samothraki there are at least three versions circulating.


These songs probably date back to around the 13th century and are based upon the canonical and apocryphal Gospels, as well as the ecclesiastical hymns of the Church. In other words, it is a folk liturgical drama of the Middle Ages which can be found in both east and west. They are today one of the most striking and beautiful examples of Greek folk music.


According to the study of Samuel Baud-Bovy, these melodies were used for actual laments. In these dirges or laments of the Panagia ordinary women with song share in the pain of the Panagia, who is a universal and timeless symbol of all mothers who attended the martyrdom of their children and experienced the absurdity and inevitability of death.


Although there are local differences in individual elements of the song or the melody or the pronunciation, structure and form of the laments, the functions are strikingly similar from southern Italy to Pontus and Cyprus
Posted by Father David Bird O.S.B. at 13:26