THE ICON: A SEVEN PART DOCUMENTARY (plus) MAY 13TH, FEAST OF OUR LADY OF FATIMA May I please beg the hospitality of this blog post. Today, May 13th, is the Feast of Our Lady of Fatima, a devotion which certainly unites us Western Christians to the Church in Russia , even when these feelings are not always returned, because it is in these apparitions of Our Lady that she foretold the Russian revolution by several months, saying that there would be many martyrs for the Faith. We now know that there were many martyrs, people put to death by the Communists, Orthodox and Catholics, as well as Baptists, who were joined together the "ecumenism of blood". The Latin Church throughout the world responded and, after each Sunday Mass, from soon after 1917 up till the time of Vatican II, we recited "prayers for Russia". Our Lady said that, if we offered prayers and sacrifices for Russia, she would eventually win; and this took place between the feast of the Holy Cross and the Dormition of Our Lady, at the invocation of Our Lady of Kazan in 1991 when Communism fell, but the icon of Our Lady of Kazan had vanished during the Revolution. 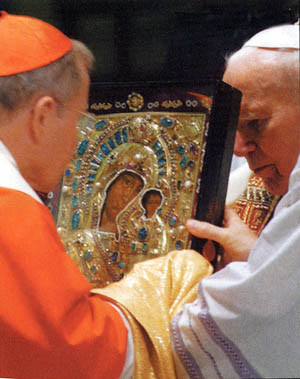 During Soviet times theories abounded that the Bolsheviks had found the icon and sold it abroad and during the 1970s a new contender was found in Fatima, Portugal. Experts tested the icon and found however that it too was a fake copy dating back to 1730. In 1993 the Fatima icon was given to Pope John Paul II who hung it in his study. On the Pope’s initiative this version of Our Lady of Kazan was returned to Kazan in 2005 and is now housed in the Annunciation Cathedral in the Kremlin. The original icon however is still missing without trace.

Here is the account of how an Orthodox iconographer came to paint (write?) an icon of Our Lady of Fatima which is now in the the catholic parish of Saint John the Baptist in Tsarskoe Selo (Pushkin - Saint Petersburg): 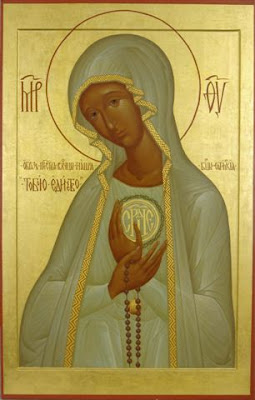 THE ICON OF THE MOTHER OF GOD OF FATIMA

NINE POSTS IN HONOUR OF OUR LADY
(INCLUDING OUR LADY OF KAZAN & OF FATIMA)
Posted by Father David Bird O.S.B. at 13:23