A WONDROUS FEAST OF C. S. LEWIS IN THE THE CHRONICLES OF NARNIA by C.S. LEWIS

“Imagine yourself as a living house. God comes in to rebuild that house. At first, perhaps, you can understand what He is doing. He is getting the drains right and stopping the leaks in the roof and so on: you knew that those jobs needed doing and so you are not surprised. But presently he starts knocking the house about in a way that hurts abominably and does not seem to make sense. What on earth is He up to? The explanation is that He is building quite a different house from the one you thought of—throwing out a new wing here, putting on an extra floor there, running up towers, making courtyards. You thought you were going to be made into a decent little cottage: but He is building a palace. He intends to come and live in it Himself.” 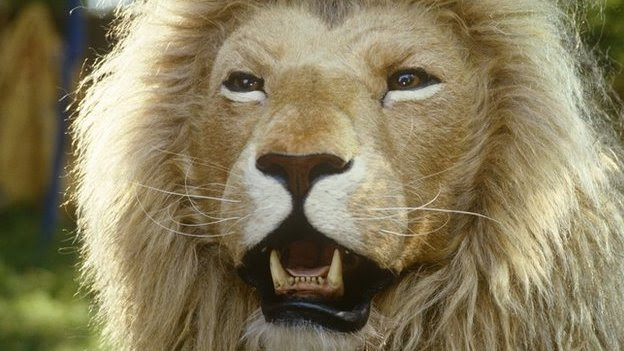 “What Aslan meant when he said he had died is, in one sense plain enough. Read the earlier book in this series called The Lion, the Witch and the Wardrobe, and you will find the full story of how he was killed by the White Witch and came to life again. When you have read that, I think you will probably see that there is a deeper meaning behind it. The whole Narnian story is about Christ. That is to say, I asked myself ‘Supposing that there really was a world like Narnia and supposing it had (like our world) gone wrong and supposing Christ wanted to go into that world and save it (as He did ours), what might have happened?’ The stories are my answers. Since Narnia is a world of Talking Beasts, I thought He would become a Talking Beast there, as He became a man here. I pictured Him becoming a lion there because (a) the lion is supposed to be the king of beasts; (b) Christ is called ‘The Lion of Judah’ in the Bible; (c) I’d been having strange dreams about lions when I began writing the work. The whole series works out like this.

The Magician’s Nephew tells the Creation and how evil entered Narnia.
The Lion, the Witch and the Wardrobe, the Crucifixion and Resurrection.
Prince Caspian restoration of the true religion after corruption.
The Horse and His Boy the calling and conversion of a heathen.
The Voyage of the Dawn Treader the spiritual life (especially in Reepicheep).
The Silver Chair the continuing war with the powers of darkness.
The Last Battle the coming of the Antichrist (the Ape), the end of the world and the Last Judgment.”**

The religious symbolism behind the Chronicles of Narnia
By Alister McGrath

What's the best children's book of all time? A 2008 survey found most people believed it was C. S. Lewis's The Lion, the Witch, and the Wardrobe. This opening novel of the Chronicles of Narnia series is widely regarded as its highlight.

Lewis himself would have been surprised at his immense popularity today. Although he had been hugely popular in his lifetime, he was gloomy about his future prospects.

Towards the end of his life, he told friends he expected to be forgotten within a few years of his death. Yet Lewis's books - including the Chronicles of Narnia - sell more strongly today than at any point during his lifetime.

So how did a bachelor Oxford don without any children of his own come to write this classic work? What do people find so intriguing about the Chronicles of Narnia? And why does it retain such an appeal, 50 years after its author's death in November 1963?

As a child, Lewis loved stories, but had little interest in Christianity. He later came to wonder how stories might have helped him to embrace a faith that he neither understood nor appreciated. What if stories could have opened up the wonder and joy of a faith that he had to wait two decades to discover?

Greatest literary creation
Lewis may well have written the books that he would have liked to read as a boy—both as something that excited his imagination and that helped him to offer what he later called an "imaginative welcome" to the Christian faith.


"I saw how stories of this kind could steal past a certain inhibition which had paralysed much of my own religion in childhood," he said.


Religious symbolism thus plays a major role in the Chronicles of Narnia.

One of the best examples of this symbolism is Aslan, the noble lion of Narnia. Just about everyone agrees that he's the stand-out character of the Chronicles of Narnia and probably Lewis's greatest literary creation.

Lewis seems to have begun to write The Lion, the Witch and the Wardrobe without any clear idea of how its plot and characters would develop. Then Aslan came "bounding in" to Lewis's imagination, and the narrative took shape.

Aslan is a literary Christ figure who plays a pivotal role in the story of Narnia, just as Jesus Christ is central to the Christian faith.

Lewis explained in a letter to Arthur Greeves in October 1931, that he set out his story of Aslan as a retelling of the "actual incarnation, crucifixion, and resurrection."


Lewis does not tell us what Jesus Christ is like; he shows us what Aslan is like, and allows us to take things from there by ourselves.

"Let us suppose that there were a land like Narnia, and that the Son of God, as he became a Man in our world, became a Lion there, and then imagine what would happen," he told a fifth grade class in Maryland in a letter in 1954.

For Lewis, one of Aslan's chief roles is to enable people to discover the truth about themselves.

Aslan is such a commanding figure that he helps people who might otherwise remain locked in self-deception break free from this prison. He makes it possible for people to confront the awkward truth about themselves.

In The Magician's Nephew, things take a turn for the worse when someone wakes nasty Queen Jadis up from her enchanted sleep. But who would do such a stupid thing? Who would be mad enough to unleash her evil?

When questioned by Aslan, Digory admits that he was one who rang the bell. He offers some half-hearted defence of his action. But as Aslan stares at him, he breaks down and admits his failure.

Digory abandons his pathetic attempts at self-justification, and takes responsibility for his actions. The gaze of Aslan compels him to tell the truth, both to Aslan and to himself.

It is as if Aslan offers a mirror in which we see ourselves as we really are. Or a light which reveals what we are really like, no matter how uncomfortable this may be.

Lewis is trying to help us realize that the quest for virtue involves both breaking the power of sin and embracing the power of good. Both, for Lewis, require the grace of God.

Eustace is portrayed as a thoroughly selfish child, who changes into a dragon as a result of his "greedy, dragonish thoughts."

Eustace frantically tries to scratch off his dragon's skin. Yet each layer he removes merely reveals yet another layer of scales underneath it. He realizes that he is trapped within a dragon's skin because he has become a dragon.

Then Aslan appears, and tears away at Eustace's dragon flesh with his claws. The lion's claws cut so deeply that Eustace is in real pain - "worse than anything I've ever felt."

When the scales are finally removed, Aslan plunges the raw and bleeding Eustace into a well from which he emerges purified and renewed.

The symbolism of Eustace's immersion in the water of the well reflects the New Testament's language about baptism as dying to self and rising to Christ.

Lewis's religious symbolism explores how we can be trapped by forces over which we have no control.

The dragon is a symbol of the power of sin to entrap, captivate, and imprison people. It can only be broken and mastered by the redeemer, Aslan, who heals and renews Eustace, restoring him to what he was intended to be.

As might be expected, the storyline and religious symbolism of the Chronicles of Narnia divide its readers.

Some see Narnia as childish nonsense. To others, it is utterly transformative.

For those, this evocative story, rich in symbolism, affirms that it is possible for the weak and foolish to have a noble calling in a dark world; that our deepest intuitions point us to the true meaning of things; that there is indeed something beautiful and wonderful at the heart of the universe, and that this may be found, embraced and adored.


Whether Lewis is right or wrong, he has bequeathed us a children's story that opens up some of the deepest questions of life using powerful imagery. Its future seems assured.
(PLEASE CLICK ON THE TILES)
Peter Kreeft: C.S. LEWIS IN THE ABOLITION OF MAN

PODCASTS ON "THE FOUR LOVES" by C. S. Lewis

THE POWER OF THE CHRISTIAN IMAGINATION: LEWIS, TOLKIEN & THE INKLINGS (Orth.)

A SHORT NOTE BY FR DAVID ON THE ECUMENICAL IMPORTANCE OF
C. S. LEWIS

The Catholics, (for example, Peter Kreeft), and the Orthodox, (for example, the Revd Robert Stroud), read C.S. Lewis and can see their faith plainly but profoundly expressed.  Anglicans, of course, and a large part of the Protestant world claim him as their own.   He is, perhaps, the greatest witness in the 20th Century to the essential unity of Christian Tradition.
Posted by Father David Bird O.S.B. at 15:31