OUR LADY OF GUADALUPE

OUR LADY OF GUADALUPE
AND ST JUAN DIEGO
by Mark Armstrong

my source: taken from The Integrated Catholic Life

Nearly 12 years after the Spanish landed and nine years after the end of hostilities, there had been only limited success with converting the Aztecs and other tribes to the Catholic faith.  By 1531 there were few converts.  The Spanish tried to translate, for the most part unsuccessfully, the tenets of the Faith to a people who did not have a written language.  Suddenly, and quite unexpectedly for all involved, that all changed  482 years ago today when a convert to the faith, Juan Diego, encountered Mary, the Mother of God. 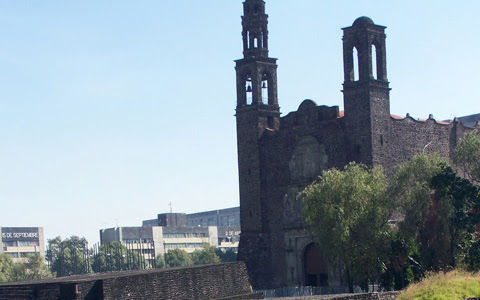 Church of Santiago de Tlatelolco
(where Juan Diego attended)
Juan Diego — his indigenous name,  Cuauhtlatoatzin, means “the eagle that talks” — was a widowed convert to Roman Catholicism on his way to Mass on December 8, 1531, Mary’s Immaculate Conception feast day. For several years Juan Diego, then in his mid-fifties, got up before dawn and walked fifteen miles, one way, to attend Mass.  The stone church he attended (which still stands in Mexico City) was erected from the dismantled Aztec pyramid stones.  As Juan Diego walked passed by Tepeyac Hill, a few miles from church, the sky became bright and he heard singing on top of the hill, like the songs of various birds.

At the end of the song, as Juan Diego looked toward the hill, he heard a woman call out to him. There, he saw a young lady whose clothes shone with the radiance of the sun. He prostrated himself in front of her. When she asked Juan where he was going, he replied that he was going to church to hear the sermons of the friars. The woman identified herself as “the eternally consummate virgin Saint Mary, mother of the very true deity, God, the giver of life, the creator of people, the ever present, the Lord of heaven and earth.” She then asked Juan Diego to relate to the bishop her wish for a Church to be built on that very spot, where she would attend to the “weeping and sorrows of you and all the people of this land, and of the various peoples who love me….”

Juan Diego rushed the final miles on foot and waited for hours to see Bishop Juan Zumarraga. The friars were reluctant. After all, Juan Diego was a poor Indian with sandals, a walking stick and no appointment to see the bishop. After waiting patiently, Juan Diego was finally ushered in. When he related his story to Bishop Zumarraga, Juan Diego, through a translator, was told that he needed a sign to prove that this account was true. A series of other events happened to Juan Diego over the next three days that would take too long here to explain, but then on December 12, 1531, Mary provided a sign that convinced the bishop that Juan Diego spoke the truth.

When Mary appeared to Juan Diego 482 years ago today, she directed him to pick some flowers from the top of Tepeyac hill, and to gather them in his tilma (a long cloak) to present to the bishop as proof of her miraculous presence. (The roses he found only were previously known to grow in Spain, not in Mexico, and certainly not in the dead of winter.)  Juan Diego did as he was asked and the Blessed Mother even helped him lay the flowers in his tilma.

When Juan Diego returned to the bishop and opened his cloak to show the roses, the bishop and all those present were amazed and fell prostrate. The image of Our Blessed Mother was emblazoned on the tilma. 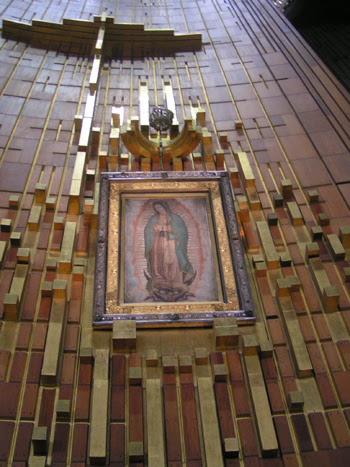 Our Lady of Guadaupe
Photography © by Mark Armstrong

The image was far more than a mere picture of a beautiful lady. Her dress and manner told a story that all the Aztec Indians could understand.  In one miraculous image, Mary explained her role in the Church and the way to God.  This is how the image helped them to understand:

Her hands are folded in supplication; her posture indicating that she is interceding for us at the throne of the God. The luminous light surrounding the Lady is reminiscent of the “woman clothed with the sun” of Revelation 12:1. The rays of the sun would also be recognized by the Aztecs and other indigenous people as a symbol of their highest god, Huitzilopochtli. Thus, the lady comes forth hiding but not extinguishing the power of the sun. She is now going to announce the God who is greater than their sun god.

Mary is standing upon the moon. Again, the symbolism is that of the woman of Revelation 12:1 who has the “moon under her feet.” The moon for the Aztecs was the god of the night. By standing on the moon, she shows that she is more powerful than the god of darkness.

The eyes of Our Lady of Guadalupe are looking down with humility and compassion. This was a sign to the native people that she was not a god since in their iconography the gods stare straight ahead with their eyes wide open.

The angel supporting the Lady testifies to her royalty. To the Aztecs only kings, queens and other dignitaries would be carried on the shoulders of someone. The mantle of the Lady is blue-green or turquoise. To the native people, this was the color of the gods and of royalty. The stars on Mary’s mantle show that she comes from heaven.

The gold-encircled cross brooch under the neck of the Lady’s robe is a symbol of sanctity. The girdle or bow around her waist is a sign of her virginity, but it also has several other meanings. The bow appears as a four-petaled flower. To the native Indians this was the nahui ollin, the flower of the sun, a symbol of plenitude. For them, this was the symbol of creation and new life. The high position of the bow and the slight swelling of the abdomen show that the Lady is with child.

By Mary’s dress, the image shows that she is of royalty from heaven and was both a virgin and “with child.” Thus, the image of Our Lady of Guadalupe, the patroness of the Americas, has become a powerful symbol for the pro-life movement.

JUAN DIEGO AND OUR LADY OF GUADALUPE
by Diana von Glahn
my source: Roman Catholic Spiritual Direction
For this section on the symbolism and meaning of Our Lady’s tilma, I recommend Our Lady of Guadalupe and Saint Juan Diego by Msgr. Eduardo Chavez, an expert on Our Lady of Guadalupe.

Today, we are going to look at the tilma itself and its symbolism and miraculous characteristics.
Juan Diego’s Miraculous Tilma
Woven out of cactus fiber, exposed to the smoke and light from hundreds of thousands of candles, and the humid and salty air of Mexico City for more than 120 years without any protection, Juan’s tilma should have disintegrated centuries ago. Still, almost 500 years after Mary put her image on it, we can still see it at the Basilica of Our Lady of Guadalupe, in Mexico City.

AT LEAST WE CAN PRAY FOR THEM!! 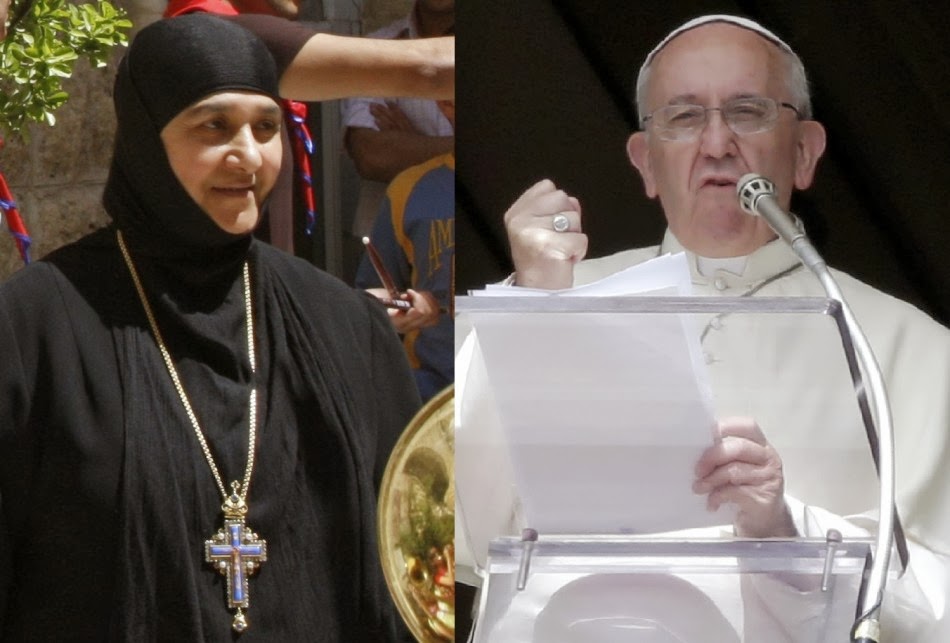 what else can we do?

my source: Archbishop Cranmer blog
Somewhere around Maaloula, Syria, 12 nuns are cowering in fear of their Islamist kidnappers. They may be being beaten, raped or beheaded one by one. But who cares? We've got Nigella Lawson's coke habit to tickle our itching ears. Mother Superior Pelagia Sayyaf and 11 of her sisters were abducted at gunpoint from St Tecla Orthodox monastery and taken hostage by an army of "rebels", along with the orphans who were being fostered and cared for. But who cares? We've got the identity of Tom Daley's handsome new boyfriend to fantasise about. The international community and world governments are indifferent to the plight of the nuns of the St Tecla convent. And so are most people in Britain. Churches, monasteries and convents throughout Syria are being razed, desecrated and pillaged. Maaloula is being cleansed of Christians. But who cares? We've got celebrity drugs and gay sex to gossip about. Of course, if these were gays and lesbians being kidnapped, beaten and tortured by Islamists, we'd soon have celebrity declamations and government condemnation. There'd be Twitter campaigns and Facebook pages dedicated to their freedom, and the media would full of Stephen Fry demanding justice. But these are only nuns. And no one really gives a shit about Christians. We've got Nigella's coke and Tom's boyfriend to titillate us.
Posted by Father David Bird O.S.B. at 04:59