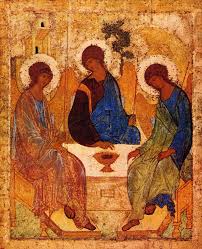 If anyone knows anything about the relationship between the Catholic Church and the Orthodox Church, he probably knows that one of the chief points of division is the placing of the "Filioque" into the Creed by the Latins (us) on papal authority. There have been other causes of division and misunderstanding, but this really set the cat among the pigeons. We do not consider them heretics because they omit the "filioque", but they often consider us heretics because we inserted it and continue to use it. It must be remembered that they have not had a Vatican II to re-think their relationship with other Christian churches and the world. However, we cannot blame their narrowness of mind entirely on them. I very much suspect that the "filioque" was placed in the Creed in the Latin rite with papal authority principally to catch the Greeks on the wrong foot. It was by request of the Holy Roman Emperor and was resisted for many generations by the popes who knew that to recite an identical Creed with the Greeks was a sign of communion with them.   One pope even had the Creed written in  marble in St Peter's without the Filioque, symbolically saying that adding it to the Creed was never going to happen!  The Holy Roman Emperors of the West  were not the authentic Roman emperors, successors to Julius Caesar and Caesar Augustus.   That honour belonged to the Emperors of Byzantium.   However, it was reasoned, if the Greeks were to become heretics, the Byzantine Emperors could no longer be considered the legitimate heirs of Constantine who first made  peace with the Church and became its protector.   Unfortunately, in a moment of weakness, in 1024, Pope Benedict VIII gave in to Holy Roman imperial pressure with terrible consequences.  I am not talking about the doctrine which is a product of Latin Tradition and, in Latin, does not mean what the Greek thinks it means.

The problem is that dogmas are not isolated truths that can be properly understood in any context.   Firstly, they have been formed over centuries within a context of prayer, both liturgical prayer and interior prayer.   Secondly, the inadequacy of their language has been made up for by the synergy between  the Holy Spirit and the Church that uses it, especially in its liturgy.   Thirdly, a church's understanding and expression of an individual dogma is related to its understanding and expression of all other dogmas and beliefs it holds to be true, and which have been passed down and developed, primarily in the Liturgy, sermons,, devotional literature and works of theology.    All this is expressed in a particular language and culture, and this culture is formed by its history.

The trouble was that the Orthodox East lived in a culture of continuity with its Roman past, and was, perhaps, the most advanced culture in human history, while the western culture was constructed out of the Roman empire in sharp decline and the barbarian tribes that rushed in to fill in the hole.  The two major parts of the Church had very different pastoral priorities, one of them in the West being keeping the Church from being split up on tribal lines in an area where Christians waged war on each other. The two sides had different languages,, which meant that the Greek Fathers had to be translated into Latin, so St Augustine never knew St Basil's writing on the Blessed Trinity.    The Byzantine laity were literate and the Latins, on the whole, were not.   Both sides were formed by their situation, but neither understood the other.  Both expected the other to follow the same customs, have the same priorities and the same ideas as itself.   As bad feeling and rivalry mounted, so any differences on the other side were usually interpreted in the worst possible way.

Then the "filioque", already a bone of contention, was put into what was supposed to be their common profession of faith.   It is a Latin word that comes out of the Latin tradition of prayer, theological thought and piety.   For western Catholics there was no problem.   It did not seem to them to be an addition, merely a clarification.   To the Greeks, it was a doctrine that stood on its own, bearing no relationship to their liturgy, to their interior prayer, to their theological history, to their culture; so it could not be properly understood.   This was made worse by the fact that, when translated into Greek, it implied that the Son, along with the Father, was equally the Source of the Spirit and that he gives the Spirit to the Father.

The two sides gradually moved apart.  As Metropolitan Hilarion of Volokolamsk has said, about a thousand years ago, both sides decided it could do without the other.   There is no real date for the schism.   1054AD is the date when pope and patriarch of Constantinople excommunicated each other.   That is  often given as the date; but the Russian Orthodox Church keeps the feast of the Translation of the Relics of St Nicholas of Myra (Fr Christmas) to Bari because it was still in communion with Rome when this happened in 1213AD. There was a Benedictine monastery on Mount Athos from 980 to the late 13th Century  There were churches in Italy in communion with Constantinople and Rome in the 16th Century, and the Jesuits opened a school at Protaton on Mount Athos in the 17th Century.  Also, Jesuits were much sought after as confessors by many Orthodox in the same period.   The compiler of the Philocalia, St Nicodemos of the Holy Mountain, champion of Hesychasm, also translated the "Exercises of St Ignatius Loyola" into Greek.   There are areas of the Middle East where sharing in the sacraments is common.   One Greek Orthodox priest told me, "We don't agree with you about the pope and have no intention of putting ourselves under his jurisdiction.   Because of our disagreement, there are those who will have nothing to do with Catholics; but, more commonly, while we do not permit communion between  our two churches under normal circumstances, we are friends; and, in a crisis, we help each other out unofficially.   Thus, for some weeks, I looked after a Jesuit parish. That is how it is on both sides." However, this is a diversion from our topic which is the Holy Trinity. 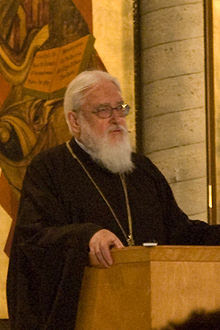 I know of no one better qualified to teach us on the Holy Trinity than Metropolitan Kallistos Ware.  An ex-Anglican, he is one of the leading theologians in the Greek Orthodox Church, he lives and lectures at Oxford, and is involved in the Catholic-Orthodox theological discussions.  He really is an excellent theologian and a brilliant speaker, and he goes beyond controversy to the Truth.

Therefore, I urge you to put yourself consciously in the presence of God and get ready to listen prayerfully.   You will not understand what is to be understood about the Trinity unless you are willing to pray the Trinity.   One of the main problems has been that, when Catholics and Orthodox have met to deal with their understanding of the Blessed Trinity, too often they have given up prayer in favour of argument.

Faith is knowledge based on (religious) love, firstly God's love for us, and secondly our love for him.   In this context, our knowledge of each other is limited by our lack of love.   Our understanding of the Holy Trinity is enlightened by our love that shares in the very love of the Three Persons for each other.   Hence we cannot do theology without prayer.   With that in mind, listen to the three videos below.   There will be more soon, sometimes with a commentary.   GOD BLESS you