ADDRESS OF THE ECUMENICAL PATRIARCH BARTHOLEMEW - MESSAGE OF POPE FRANCIS

Religious Freedom Today: A Seminar commemorating the 1700th anniversary of the Edit of Milan – Address of the Ecumenical Patriarch Bartholomew and message of Pope Francis. 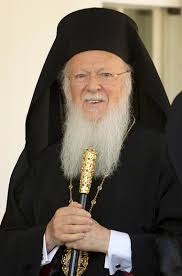 Istanbul, 17.05.2013. “The anniversary that we are celebrating and honoring provides occasion for us to consider and reflect on the development of the contemporary world 1700 years after the divinely-inspired Emperor established in action and legislation the fundamental principles, on which modern Christian societies – and by extension and analogy, the entire world – are based to this day” – said His All-Holiness Ecumenical Patriarch Bartholomew, who this morning declared open the Seminar on Religious Freedom Today celebrating the 1700th anniversary of the Emperor Constantine’s Edit of Milan. The Seminar, organized by the Ecumenical Patriarchate of Constantinople in cooperation with the Council of European Bishops’ Conferences (CCEE), is being held in Istanbul (17-18 May) with the participation of international speakers and delegations representing the Orthodox Churches and the Catholic Church in the European continent. The seminar will explore the historical, legal and political aspects of religious freedom in Europe and throughout the world.

In his address, the Ecumenical Patriarch reminded participants that “the basic human rights, for which all peoples and societies strive, but which are frequently perceived in a sense of retribution that does not resemble the spirit of the Gospel or Christianity, comprise spiritual values, which the Emperor Constantine planted within the governance and structure of his empire because he discerned and predicted that this was the only way of securing progress and preserving peace.” His All-Holiness also stressed: “It is essentially the same values that the modern world has inherited, except that titles have been altered, while humanity now formally declares that it does not believe in God and the hour of Christianity has passed. Nevertheless, despite these cries, Christianity and the Truth are not only not out-dated, but have in fact increasingly matured.” He also added that, for the Ecumenical Patriarchate, “faith is not a social phenomenon or mere ideology. It is the sanctifying grace, which descends upon us and visits us eternally and silently, … something discernible among those who obey God’s will but even recognizable among those who disobey his commandments. Despite frequent and dangerous reformations, which sometimes destroy the very foundations of society, such as a lack of respect for the sacred institution of family and marriage, the legal recognition and regulation of serious mortal sins or unnatural conditions, contemporary state institutions are deeply permeated by the Gospel of Jesus Christ and the blood of the Church Martyrs.”

“This is why we Christians are not dragged down and do not despair. We know – stated Bartholomew – that people make mistakes in their judgments, thoughts, programs, ideologies and considerations. However, the Church does not; the Church is not abolished, even when Christian nations are dissolved, even when the Church lives and exists in (sometimes harsh) captivity, even when the Church is persecuted. The Church is in the world and serves the world, but it is not controlled by the world, which is the reason why evil does not affect it. The spirit conquers the flesh. Christ reigns forever. The Lord is victorious over all”.

Through a message from the Secretary of State, Cardinal Tarcisio Bertone, Pope Francis sent his “fraternal good wishes to His Holiness Bartholomaios, Archbishop of the city founded by Constantine himself”, stressing that he is looking forward “in hope to the day when the divisions of the second millennium will be definitively consigned to the past.” Concerning the theme of the Seminar, the message states that “Pope Francis is eager that the common witness of Christ’s disciples in Europe should help to spread the good news of salvation to the ends of the earth. He calls on civil authorities everywhere, in the light of Constantine’s historic decree, to respect the right of believers to worship freely and to express their faith publicly. At the same time he invites all European citizens to recognize the role that Christianity has played in shaping our culture, and to remain open to the continuing contribution that Christian believers can make in this regard.”